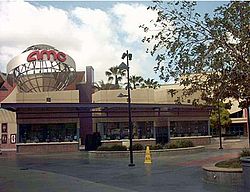 A typical AMC Theatres megaplex with 30 screens at the Ontario Mills in Ontario, California.

A multiplex is a movie theater complex with multiple screens within a single complex. They are usually housed in a specially designed building. Sometimes, an existing venue undergoes a renovation where the existing auditoriums are split into smaller ones, or more auditoriums are added in an extension or expansion of the building. The largest of these complexes can sit thousands of people and are sometimes referred to as a megaplex.

The difference between a multiplex and a megaplex is related to the number of screens, but the dividing line is not well-defined; some might say that 14 screens and stadium seating make a megaplex; while others might say that at least 20 screens are required.[1] Megaplex theaters always have stadium seating, and may have other amenities often not found at smaller movie theaters; multiplex theatres often feature regular seating.[citation needed]

The Kinepolis-Madrid Ciudad de la Imagen megaplex in Spain is the largest movie theater in the world, with 25 screens and a seating capacity of 9,200, including one 996-seat auditorium.[2][3][4]

In about 1915 two adjacent theatres in Moncton, New Brunswick, under the same ownership were converted to share a single entrance on Main Street. After patrons entered the door, there were separate ticket booths for each theatre, and different programs were shown. The arrangement was so unusual that it was featured by Robert Ripley in his Believe It or Not! comic strip.[5] Before multiplexes, some cinemas did show different films at the same time in one auditorium, such as in Cairo, Egypt, reported in 1926.[6]

In 1930, the Regal Twins in Manchester, England became the world's first multiplex followed by Studio 1 and 2 in Oxford Street in London in 1936.[6]

In 1937 James Edwards twinned his Alhambra Theater in the Los Angeles area by converting an adjacent storefront into a second "annex" screen. While both screens would show the same feature movie, one would also offer a double bill. It did not convert to showing different movies on both screens until some time after Nat Taylor (see below).[7] On February 25, 1940, the Patricia Theater in Aiken, South Carolina made news by becoming what is believed to be the first two-screen theater in the United States showing different movies when operator H. Bert Ram added a screen to an adjoining building and shared a common box office. The main screen remained the Patricia Theatre and the Patricia Annex became known as the Little Patricia.[8]

In December 1947 Nat Taylor, the operator of the Elgin Theatre in Ottawa, Canada, opened a smaller second theater ("Little Elgin") next door to his first theater. It was not until 1957, however, that Taylor decided to run different movies in each theater, when he became annoyed at having to replace films that were still making money with new releases.[7] Taylor opened dual-screen theaters in 1962 in Place Ville Marie in Montreal, Quebec, and at Yorkdale Plaza in Toronto, Ontario, in 1964.

Also in late 1947, but in Havana, Cuba, the Duplex movie theater was built to share the vestibule and ancillary facilities with the previously existing Rex Cinema (open since 1938); they were both designed by the same architect, Luis Bonich. The programming was coordinated, so that one of them showed documentary and news reels. while the other was showing feature films.[9][10] They were in use at least until the 1990s.

In 1963 AMC Theatres opened the two-screen Parkway Twin in Kansas City, a concept which company president Stan Durwood later claimed to have come up with in 1962, realizing he could double the revenue of a single theater "by adding a second screen and still operate with the same size staff".[7][11] Also, the shopping center structure where the Parkway was located could not support a large theater, so two small theaters were built to avoid that issue, and at first both theaters played the same film.

In 1965, the first triplex was opened in Burnaby, Canada by Taylor Twentieth Century Theaters.[6] AMC followed up on the Parkway Twin with a four-screen theater in Kansas City, the Metro Plaza, in 1966 and a six-screen theater in 1969.[12][6] Durwood's insight was that one box office and one concession stand could easily serve two (or more) attached auditoriums. Another AMC innovation was to offset the starting times of films, so that staff members who previously had downtime while films were playing at a single-auditorium theater would now be kept continuously busy servicing other auditoriums.

In 1965 Martin's Westgate Cinemas became one of the first indoor two-screen theaters in Atlanta, Georgia. Located in East Point, Georgia, it was later converted into a three-screen venue after a fire partially destroyed one of the theaters. The Disney family film Those Calloways had its world premier at the Westgate,[13] the only film to have been so honored at that theater.

Opening in April 1979, the 18-screen Cineplex, co-founded by Nat Taylor in Toronto's Eaton Centre, became the world's largest multitheatre complex under one roof.[14] It was expanded to 21 screens by at least 1981.[15]

In 1999, a 31-screen multiplex was opened in Barra da Tijuca, Rio de Janeiro in Brazil to become the largest in the world.[21]

During a high period of growth in many towns, the competition presented by a multiplex would often put the town's smaller theaters out of business. Multiplexes were often developed in conjunction with big-box stores in power centers or in suburban malls during the 70s and 80s. The expansion was executed at the big-box pace which left many theater companies bankrupt while attempting to compete — almost all major movie theater companies went bankrupt during this hasty development process; however, AMC Theatres and Cinemark Theatres did not go into bankruptcy. The early U.S. megaplexes sparked a wave of megaplex building across the United States. This was financed in part by a sale-leaseback model with Entertainment Properties Trust.

Event Cinemas is the largest film exhibitor in Australia and New Zealand.

The largest megaplex in the Southern Hemisphere is the 26-screen Marion MEGAPLEX in Adelaide, South Australia. The megaplex was originally a 30-screen megaplex branded as Greater Union but was modified to accommodate Gold Class and V-Max screens and was re-branded as Event Cinemas. The auditoriums sit on top of Westfield Marion, which is the largest shopping complex in Adelaide.

Canada's largest movie theaters over the years have been located in Toronto. As mentioned above the 18- (later 21-) screen Cineplex was the movie theater with the most screens in the world until the late 1980s, but remained the largest movie theater in Canada until it was closed at the turn of the 21st century. In 1998, AMC expanded to Canada, building large movie theatres with as many as 24 screens before opening a 30-plex there in 1999, which is the AMC Interchange 30. Then in 2008, the 24-screen AMC Yonge Dundas 24, adjacent to the Eaton Centre, was completed. Cineplex Entertainment purchased the theater in 2012, along with several other Canadian AMC megaplexes, bringing the company full circle. After that, some more were closed or sold to Empire Theatres. AMC exited Canada by closing the AMC Interchange 30 in 2014.

In India, the mushrooming of multiplexes started since the mid-1990s. Cinema chains such as INOX, PVR, Carnival Cinemas, SPI Cinemas, Cinepolis and Big Cinemas operate multiplexes across the country. The largest multiplex in India is the 16-screen megaplex Mayajaal in chennai.

In the Netherlands there weren't many multiplexes until the millennial change. In April 2000 Pathé ArenA opened its doors in the ArenAPoort area in Amsterdam. It's the largest multiplex in the Netherlands and features 14 screens and 3250 seats in total. Nowadays[when?] a lot of other multiplexes are being set up, but so far none of them have surpassed Pathé ArenA's capacity.

Multiplexes (multicines) are very popular in Spain and they can be found in or close to most cities, displacing the traditional single-screen theaters.[24] Many middle-sized and large cities have several of them, and they are also common in malls. The average number of screens per theater was 5.2 in 2016.[25]

As noted above, the world's first multiplex, the Regal Twins, opened in Manchester in 1930.[6] The first triplex in the UK was the ABC Cinema in Lothian Road, Edinburgh which opened 29 November 1969.[6] The Regal Twins were converted in 1972 to a five screen complex (Studios 1 to 5) by Star Group, as the first five-cinema complex in Britain.[26] In 1985, AMC Cinemas opened a ten-screen cinema at The Point in Milton Keynes. This was AMC's first multiplex outside of the United States[27][28] and saw a turnaround in the decline of the UK cinema industry. The success of the cinema at Milton Keynes led to further expansion by AMC in the UK to Newcastle, Dudley, Telford, Warrington and by royal appointment to London, before it eventually sold its UK division to a joint venture which it had formed with United Artists and Cinema International Corporation, which later became UCI Cinemas in 1989.[27][29] Non-multiplex cinemas are now rare in the UK. In July 2000, Star City, Birmingham opened with a 30-screen Warner Village Cinemas (now a 25-screen Vue Cinemas with 5,079 seats)[30], at the time the largest cinema in Europe.[31]

By 1994, building of multiplexes with 14-24 screens with 2,500 to 3,500 seats was the norm. The expansion of multiplexes also concentrated the market with the top ten exhibitors controlling 47% of the nation's screens compared to 27% in 1986.[36] The AMC Grand 24 opened in Dallas, Texas on May 19, 1995 as the first 24-screen megaplex built from the ground up in the United States and the largest theater complex in the U.S.[1][20][36] A 21-screen Edwards Theater opened at the Irvine Spectrum Center in Irvine, California the same year.[20] After a lease renewal dispute with the property owner, the AMC Grand 24 closed in November 2010.[37] The building has been divided and reopened in 2012 as a Toby Keith–owned nightclub and a 14-screen first-run movie theater operated by Southern Theatres as the "AmStar 14". This theatre is now the Studio Movie Grill Northwest Highway as of 2013[update].[38]

AMC Theatres has since built many megaplexes with up to 30 screens, starting with the AMC Ontario Mills 30 in 1996, which was the largest theater in the world when it opened.[20] Three months after the AMC opened in Ontario, California, Edwards built their biggest theater across the street, the 22-screen Ontario Palace 22.[20]