Mount Waiʻaleʻale /ˌwaɪˌɑːleɪˈɑːleɪ/ is a shield volcano and the second highest point on the island of Kauaʻi in the Hawaiian Islands. Its name literally means "rippling water" or "overflowing water" [1] 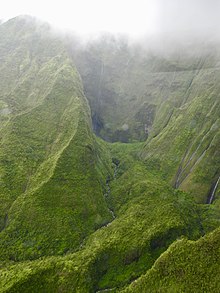 Waterfalls around the caldera 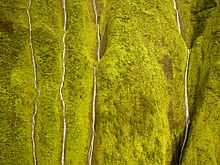 The "Wall of Tears" in the crater of Mount Waialeale

The local tourist industry of Kauai has promoted it as the wettest spot, although the 38-year average at Mawsynram, Meghalaya, India is higher at 467.4 inches (11,870 mm). Both Mawsynram and Cherrapunji in Meghalaya are recognized by the Guinness Book of World Records as having higher average rainfall. Mawsynram's rainfall is concentrated in the monsoon season, while the rain at Waiʻaleʻale is more evenly distributed through the year.

Several factors give the summit of Waiʻaleʻale more potential to create precipitation than the rest of the island chain:

The great rainfall in the area produces the Alakaʻi Wilderness Preserve, a large boggy area that is home to many rare plants. The ground is so wet that although trails exist, access by foot to the Waiʻaleʻale area is extremely difficult.