Mount Karthala or Karthola (Arabic: القرطالة‎ Al Qirṭālah) is an active volcano and the highest point of the Comoros at 2,361 m (7,746 ft) above sea level. It is the southernmost and larger of the two shield volcanoes forming Grande Comore island, the largest island in the nation of Comoros. The Karthala volcano is very active, having erupted more than 20 times since the 19th century. Frequent eruptions have shaped the volcano's 3 km by 4 km summit caldera, but the island has largely escaped broad destruction. Eruptions on April 17, 2005 and May 29, 2006 ended a period of quiet. 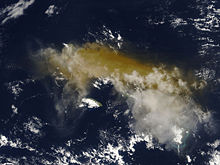 Satellite image of Karthala volcano after its November 2005 eruption-ash completely obscures Grande Comore (outlined) as well as some other islands.

The eruption, which carried a risk of lava flows and deadly volcanic gas, caused the evacuation of 30,000 residents.

The crater was clearly changed by the April 2005 eruption. A grey field of ash surrounds the crater and the caldera itself seems larger and deeper. The crater lake, which formed after Karthala's last eruption in 1991 and once dominated the caldera, is now gone completely. In its place were rough, dark grey rocks, possibly cooling lava or rubble from the collapsed crater.

On May 29, Reuters reported that residents of Moroni could see lava at the top of the volcano.[3] Within a few days the volcanic activity subsided.<ref>

The mountain is covered by moist evergreen forest up to about 1800 metres above sea-level. Higher up the vegetation consists of stunted trees and heathland where the giant heather Erica comorensis grows.

Many of the species found on the mountain are unique to the Comoros and four bird species are found only on the slopes of Mount Karthala: Humblot's flycatcher, Comoro white-eye, Comoro drongo and Karthala scops owl.

The mountain's forest is threatened by logging and the spread of agriculture. A nature reserve has been proposed to cover the mountain; it has not yet been created.