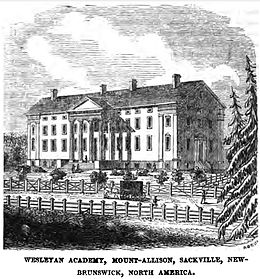 Mount Allison University (also Mount A or MtA) is a Canadian primarily undergraduate liberal arts college located in Sackville, New Brunswick. It has been ranked the top undergraduate university in the country 21 times in the past 29 years by Maclean's magazine, a record unmatched by any other university.[4] With a 17:1 student-to-faculty ratio, the average first-year class size is 60 and upper-year classes average 14 students.[5]

Mount Allison University was the first university in the British Empire to award a baccalaureate to a woman (Grace Annie Lockhart, B.Sc, 1875). Mount Allison graduates have been awarded a total of 55 Rhodes Scholarships.[6] American chemist James B. Sumner, who later won Nobel Prize in Chemistry, used to work at Mount Allison as a teaching fellow.[7] Mount Allison also has one of the largest endowments per student in Canada.

Mount Allison University is a secular (but United Church-affiliated) primarily undergraduate liberal arts university, established at Sackville, New Brunswick on January 19, 1843. The university was named after Charles Frederick Allison, in honour of his gift of land and money.[8] Its origins were steeped in the Methodist faith and it was designed to prepare men for the ministry and to supply education for lay members.[9] The university was chartered on April 14, 1849.[8]

In June 1839, Charles Allison was encouraged by Wesleyan Methodist Minister Rev. John Bass Strong that a school of elementary and higher learning be built. Allison offered to purchase a site in Sackville to erect a suitable building for an academy and to contribute operating funds of £100 a year for 10 years. This offer was accepted and the Wesleyan Academy for boys subsequently opened in 1843.[10] 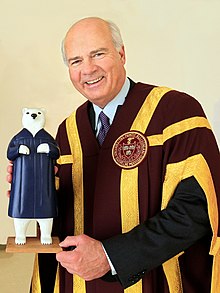 In 1854, a girls' institution (later known as the "Ladies College") was opened to complement the boys' academy. In 1858 an Act of the New Brunswick Legislature authorized the trustees to establish a degree-conferring institution at Sackville, under the name of the Mount Allison Wesleyan College.[11]

In July 1862, the degree-granting Mount Allison College was organized. The first two students, Howard Sprague and Josiah Wood, graduated in May 1863. Mount Allison was the first university in the British Empire to confer a bachelor's degree to a woman (Grace Annie Lockhart, B.Sc. 1875).[12] It was also the first university in Canada to grant a bachelor of arts to a woman (Harriet Starr Stewart).[13] For nearly a century, Mount Allison functioned as three distinct, mutually enriching parts: the college proper, the Boys' Academy, and the Ladies College. The corporate name was changed to University of Mount Allison College in 1886.[11] 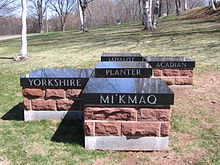 The Sackville founders monument commemorates Sackville's incorporation and its founding peoples. It was installed on the campus of Mount Allison University in 2003.

The governance was modelled on the provincial University of Toronto Act of 1906 which established a bicameral system of university government consisting of a senate (faculty), responsible for academic policy, and a board of governors (citizens) exercising exclusive control over financial policy and having formal authority in all other matters. The president, appointed by the board, was to provide a link between the two bodies and to perform institutional leadership.[9]

By 1920, Mount Allison University had three faculties: Arts, Theology, and Engineering. It awarded the degrees of Bachelor of Arts (BA), Bachelor of Science (BSc), Bachelor of Divinity (BD), and Master of Arts. It had 246 male students and 73 female students, as well as 28 academic staff, all male.[15]

The closure of the School for Girls in 1946 and the Boy's Academy in 1953 coincided with a period of expansion and provided much-needed space for the growing university. In 1958, a period of construction and acquisition of buildings began, easing the strain of overcrowding at the institution. At this time the university board and administration decided to reaffirm the traditional aims of Mount Allison in providing a high-quality undergraduate liberal arts education, along with continuing to offer professional programs in already-established fields. As such, the university decided not to compete for new professional programs and generally avoided post-graduate course development.

Mount Allison University's arms and badge were registered with the Canadian Heraldic Authority on November 15, 2007.[17]

The mission statement of Mount Allison University promotes "the creation and dissemination of knowledge in a community of higher learning, centred on the undergraduate student and delivered in an intimate and harmonious environment". Mount Allison currently offers bachelor's degrees in Arts, Science, Commerce, Fine Arts, and Music, as well as master's degrees in biology and chemistry and biochemistry, and certificates in bilingualism.[18] A Bachelor's degree in Science with a major in Aviation has been developed in conjunction with the Moncton Flight College.

Mount Allison has one of the best records of Rhodes Scholars per capita in Canada — 55 all together, and 14 in the past 16 years.

In 2014, 76 per cent of the student body received an entrance scholarship.

The University's enrolment is approximately 2,300 students. 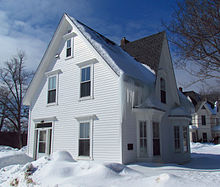 Mount Allison's architecture is one of the campus's defining features.

In most cases, the present campus is much newer than the age of the institution, which was founded in the mid-19th century. At that time, the original Mount Allison buildings were wooden clapboarded structures all painted white. Succumbing to fires or demolition, these earlier buildings have been replaced with brick or stone structures, although a unique and significant instance of early Mount Allison wooden architecture survives at the centre of campus: the President's Cottage of 1857.

Noted architectural historian, John Leroux, who is working with visual artist Thaddeus Holownia on a book about the University's architecture, calls the campus "one of the finest in Canada" [19] and says some of the most beautiful buildings built in New Brunswick in the last 100 years are located at Mount Allison.

In particular, Leroux names the Mount Allison chapel as one of the most significant buildings in the province, saying, "It is exquisite. It is nearly a perfect building." [19] The Chapel is a masterwork of the Ontario-based architecture firm of Brown, Brisley and Brown, who designed numerous new buildings and transformed the site configuration of Mount Allison in the mid- to late-1960s and early 1970s into the landscape it is today. Paramount of their scheme was the creation of the central courtyard with the Chapel as a focus at one end, and the Library's gateway colonnade overlooking the town and Convocation Hall at the other. Among the other Brown, Brisley and Brown buildings completed at Mount Allison between 1964 and 1980 are: the Gairdner Fine Arts building, the Marjorie Young Bell Conservatory of Music, the Barclay Chemistry Building, Edwards House, Thornton House, the Ralph Pickard Bell Library, and the Harold Crabtree building.

Other significant buildings are the Owens Art Gallery, the oldest University art gallery in Canada, which opened in 1895, and Hammond House, the only registered National Historic Site in the Town of Sackville. Both were designed by noted Toronto architect Edmund Burke. The Queen Anne Revival-style Hammond House was originally built for Canadian artist and head of the Fine Arts department John Hammond in 1896. It now serves as the President's residence.[20]

The Memorial Library (renamed University Centre in 1970) was constructed in the Tudor-inspired Gothic Revival style. The library also included a set of plaques, now located on the ground floor atrium of the Wallace McCain Student Centre, which are listed in the Canadian Forces' National Inventory of Canadian Military Memorials – No. 13002-004.[22] The plaques list the names of Allisonians who lost their lives at war. Every year since 1927, the names of each of the fallen are read aloud during the University's annual Remembrance Day service.

The Wallace McCain Student Centre, originally constructed as a men's residence (Trueman House) in 1945 and designed by Halifax architect C.A. Fowler, was gutted and repurposed in 2008, keeping the exterior form and stone walls intact.

The newest building on campus is the Purdy Crawford Centre for the Arts, which opened in 2014. Housing the Department of Fine Arts and the drama program, the building features art studios, a large atrium, and the 100-seat Motyer-Fancy Theatre. Designed by the internationally honoured Canadian architecture firm Zeidler Partnership, it was featured in Canadian Architect magazine in March 2015.[23] 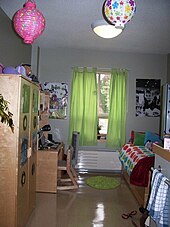 One of the single rooms at Campbell Hall

Mount Allison has housing facilities available for approximately 50 percent of its student population. More than 85 percent of first-year students choose to live in residence. On-campus accommodations are guaranteed to all first-year students who meet admission and deposit deadlines. All rooms come with high speed wired as well as wireless Internet, as well as cable, phone, and mini fridge.

All buildings are co-ed with wing to wing or integrated bathrooms. Sixty percent of rooms are either single or ensuite style and 40 percent are double accommodation. Campbell Hall, winner of CBIP Award for incorporation of environment features, offers large single rooms with ensuite bathrooms. In addition, Mount Allison also offers senior students a chance to live in one of two small residences (Carriage – six rooms, Anchorage – 11 rooms.)

The following residences are open for new and returning students:

Social life at Mount Allison tends to focus on extracurricular activities: 140 clubs and societies and over 30 varsity, club, and intramural sports teams.[5]

Mount Allison's campus paper, The Argosy, is an independent publication produced weekly. The publication dates from 1872,[24] making it one of the oldest student publications in the country. The campus and community radio station, CHMA 106.9 FM, is owned and operated by the members of Attic Broadcasting Company Ltd., a non-profit organization with its offices on the university campus. 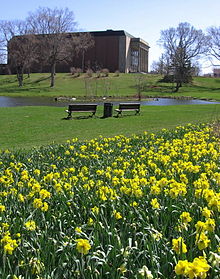 Springtime in Sackville – a view of Convocation Hall from the swan pond, Mount Allison University.

Tintamarre theatre company was founded at Mount Allison by Professor Alex Fancy and produces a bilingual collective show each year, staged at the Motyer-Fancy Theatre and later presented at junior and senior high schools throughout the Maritime provinces. A performing arts series is held at Convocation Hall (one of the largest concert halls east of Montreal) during the school year, and the annual President's Speakers Series [25] brings nationally and internationally renowned speakers to campus each year.

The Mount Allison Students’ Union (MASU) represents all full- and part-time students at Mount Allison. It operates as a membership-based non-profit corporation, and was incorporated in 1980 under the New Brunswick Companies Act.[26]

Mount Allison University 107726820RR0001 was registered as a charitable organization in Canada on January 1, 1967. The primary areas in which the charity is now carrying on programs to achieve its charitable purposes, ranked according to the percentage of time and resources devoted to each program area follow:

The charity carried on charitable programs to further its charitable purpose(s) (as defined in its governing documents) this fiscal period:

The school's team name in Canadian Interuniversity Sport (CIS) is the Mount Allison Mounties. The football team has appeared in the Vanier Cup national college football championship game twice (1984 & 1991). The Mount Allison football team also made playoff appearances in 2007, 2008, 2010, 2013, and 2014. The team won the 2013 AUS championship, but lost to the Laval Rouge et Or in the Uteck Bowl (the national college football semi final) and in 2014, losing to McMaster in the Mitchell Bowl.

Mount Allison is also home to a CIS-level women's hockey team, as well as swim, badminton, and soccer teams. Basketball and volleyball teams compete against colleges and other smaller universities.