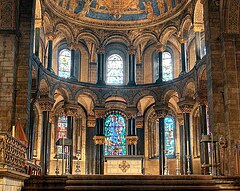 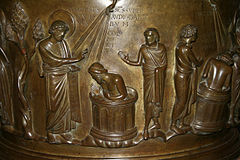 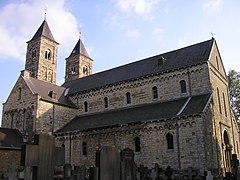 Mosan art is a regional style of art from the valley of the Meuse in present-day Belgium, the Netherlands, and Germany. Although in a broader sense the term applies to art from this region from all periods, it generally refers to Romanesque art, with Mosan Romanesque architecture, stone carving, metalwork, enamelling and manuscript illumination reaching a high level of development during the 11th, 12th and 13th centuries.

The Meuse valley lay in the heart of the Carolingian Empire and therefore the style draws largely from the heritage of the Carolingian art tradition. Thus, Mosan art contains strong classical elements, which separates it from the international Romanesque style seen elsewhere during the period, for example in France,[1] Germany[2] England and Italy. However, it shares with mainstream Romanesque art elements such as the treatment of space. Although the iconography of 11th- and 12th-century Meuse valley art largely draws on Biblical inspiration, some of the elaborately carved capitals in the two main churches in Maastricht depict scenes from many aspects of daily life, as well as images from an intriguing world of fantasy.

The Mosan region was formed largely by the boundary of the Bishopric of Liège, which had strong political links to the emperors of the Holy Roman Empire, as well as to the bishops of Cologne. The region's main artistic centres were the cities of Liège, Huy, Dinant, Namur, Tongeren, Maastricht, Roermond and Aachen, as well as a number of important monasteries: Sint-Truiden, Aldeneik, Herkenrode, Averbode, Munsterbilzen, Susteren, Sint Odiliënberg, Rolduc, Burtscheid, Kornelimünster, Stavelot, Nivelles, Aulne, Floreffe, Flône, Celles, Gembloux and Lobbes. Mosan art at its peak had a strong influence on bordering regions, notably on Rhineland art (Cologne, Bonn).

Mosan Romanesque art has been described by art historians as the first golden age of Netherlandish art (before early Netherlandish painting and Dutch Golden Age painting). Usually the term Mosan art does not include Medieval literature although Heinrich von Veldeke may be considered the first poet writing in Middle Dutch (as well as Middle High German).

Mosan architecture can be seen as a distinctive branch in Romanesque architecture, a regional style that produced imposing churches in Aachen, Liège and Maastricht, as well as monasteries in rural areas. The fully developed Mosan style of the 12th century is a comprise between the older Meuse valley traditions and foreign influences, mainly coming from the Rhineland and Italy. An outstanding factor in Mosan architecture is the closed west front (westwerk). Unfortunately, some of the largest churches, notably Liège cathedral, and the Stavelot and Sint-Truiden abbeys, were destroyed.

Mosan stone carving reached a peak in the 12th century in Maastricht, Liège and Nivelles. Maastricht 'metsen' (stone carvers) worked on capitals and reliefs as far afield as Utrecht, Bonn and Eisenach.

Metalwork has been considered the high art of the 12th and early 13th-century Meuse region, culminating in the work of Nicholas of Verdun, which is of exceptionally high quality. The Shrine of the Three Kings at Cologne Cathedral, the Anno Shrine in Siegburg and the Shrine of Our Lady in Tournai are among his best work. Other important metalworkers were Renier de Huy and Hugo d'Oignies.

Painting, illumination and other works of art

Very little has come to us from what must have been an impressive body of Mosan murals. Wolfram von Eschenbach, in his Parzival expressed his high regard for Maastricht (and Cologne) painters (Parzival, 158, 13-16). Book illumination, like the rest of the arts, was at its zenith in the second half of the 12th century. The principal centres were the abbey of Saint Laurent in Liège and the abbeys of Stavelot and Lobbes. Another highly developed art was vitreous enameling.