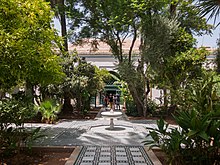 A riad garden in the Bahia Palace of Marrakesh, built in the late 19th and early 20th centuries

A riad (Arabic: رياض‎; also spelled "riyad") is a type of traditional Moroccan or Moorish interior garden or courtyard associated with house and palace architecture.[1] The term is nowadays often used in Morocco to refer to a hotel or guest house-style accommodation with shared common areas and private rooms, often within a restored traditional mansion.[2][3]

Dar Roumana, one of many historic mansions in Fes. Although it follows the model of a Moroccan courtyard house, it does not have a garden like a true riad.

The term riad originates from the Arabic term for garden, Arabic: رياض‎ (riyad).[4] Historically, the term referred to a common but specific type of interior garden: one that is symmetrically divided into four parts along its central axes and typically has a fountain at its middle.[1]:57

Riad architecture ultimately has ancient roots in Mediterranean and Middle Eastern domestic architecture.[1] Houses centered around inner courtyards existed across the ancient Greco-Roman world and, before that, in the ancient Middle East. Interior gardens are also an ancient feature of domestic architecture in the Middle East, and the geometrically arranged gardens of Islamic architecture derive from Iranian civilization in particular.[1]:69 Archaeological remains of similar gardens have been found in and around ancient Mesopotamia, and the evolution of such gardens can be found in the grand geometrically-arranged gardens of later Iranian and Indian architecture, known as chahar bagh.[1]

In addition to the existing influences of Greco-Roman culture in the Mediterranean, the formation of the Islamic world after the 7th century also spread and established these architectural models across the region and all the way to al-Andalus in the Iberian Peninsula. The ancient Roman city of Volubilis also provided reference for the beginnings of riad architecture during the Idrisid Dynasty in Morocco.[6] Interior gardens were a popular feature of palace architecture in the Islamic world because water and greenery were associated with images of paradise in Islam.[1] Prominent examples in al-Andalus (Spain under Muslim rule) were found at Madinat al-Zahra, the Aljaferia, and the Alhambra.[1][7] When the Almoravids conquered al-Andalus in the 11th century they sent Muslim, Christian and Jewish artisans from al-Andalus to Morocco to work on monuments.[8] The earliest known example of a true riad garden (with a symmetrical four-part division) in Morocco was found in the Almoravid palace built by Ali ibn Yusuf in Marrakesh in the early 12th century.[1]:71 The era of the Almoravids and their successor dynasties (such as the Almohads, the Marinids, and the Nasrids) was a formative period of Moroccan architecture and of wider Moorish architecture during which the model of the riad garden was perfected and established as a standard feature of interior secular or palace architecture in the region.[7]:358–359 It was particularly successful and common in Marrakesh, where the combination of climate and available space made it well-suited to the architecture of the bourgeois mansions and royal palaces built throughout the city's history.[1]

The 18th-century riad Chbanate in Essaouira. The house was once the home of the Caid of Essaouira.

The riad is one of the main types of a traditional Moroccan house, often with two or more stories around an Andalusian-style courtyard that centered around a fountain.[1] Riads were the stately city homes of the wealthiest citizens such as merchants and courtiers.[9][10] In many cases, especially for palaces, the gardens were surrounded by a gallery.[7] Moroccan houses were inward focused, which allowed for family privacy and protection from the weather. This inward focus was expressed with a centrally placed interior garden or courtyard, and the lack of large windows on the exterior walls of rammed earth or mud brick. This design principle also found support in the social mores of Islamic society, which placed great value on privacy and encouraged a separation between private family spaces (where women lived and worked) and semi-public spaces where outside guests were received.[1] The central gardens of traditional riads wre often planted with fruit trees such as orange trees or lemon trees. The walls of the riads could be adorned with tadelakt plaster, stucco decoration, and zellige tiles, sometimes with Arabic calligraphy and quotes from the Quran.[9][11] 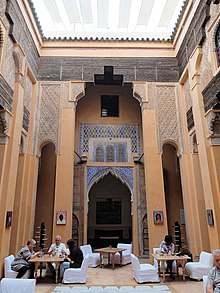 Dar Cherifa, a restored Saadian-period mansion in the Mouassine district of Marrakesh

The style of these riads has changed over the years, but the basic form is still used in designs today. Recently there has been a surge in interest in this kind of house with a wave of renovation in towns such as Marrakech and Essaouira, where many of these often-crumbling buildings have been restored to their former glory as hotels or restaurants.[11] Many of the crumbling or ruined properties in Marrakech have been bought by foreigners. This foreign interest has brought new challenges but the investment has helped with the restoration of the UNESCO site and has helped revive many of the handcrafts and artisan trades that were gradually being lost before this trend.[12] Many of the restored riads in the districts of Mouassine and Lakssour offer the finest examples of restoration as historically these areas contained many of the grand palaces from Marrakech's Saadian period.