Infinite Construction - STEAM
This article is about the MLS team. For the NASL/USL men's team, see Montreal Impact (1992–2011).

The Montreal Impact (French: Impact de Montréal) are a Canadian professional soccer team based in Montreal, Quebec. The Impact competes as a member of the Eastern Conference in Major League Soccer (MLS). The team began play in 2012 as an expansion team of the league, being the league's third Canadian club, and replaced the North American Soccer League team of the same name.

In 2015, the Impact became the second MLS club, and first Canadian club, to advance to the final of the CONCACAF Champions League, in its current name since 2008, where they finished runners-up in the two-game aggregate goal series against Club América. The Impact won the Canadian Championship in 2013, 2014 and 2019. The club plays its home games at Saputo Stadium and is coached by Thierry Henry.

Toward the end of 2007, much speculation had been made about a possible franchise move for the lower division Impact to Major League Soccer (MLS). The construction of the expandable Saputo Stadium further suggested an interest on the part of the group to move up to the top level North American league. Although Toronto FC held a three-year Canadian exclusivity deal that did not expire until 2009, they stated in March 2008 that they would gladly welcome the Impact into MLS.[2]

Chairman Joey Saputo held talks with George Gillett (former co-owner of Liverpool F.C. and former owner of the Montreal Canadiens) regarding possible joint ownership of a franchise.[3] On July 24, 2008, MLS announced they were seeking to add two expansion teams for the 2011 season, of which Montreal was listed as a potential candidate.[4]

On November 22, 2008, the group's bid for an MLS franchise was not retained by commissioner Don Garber. In response to Vancouver's successful bid in March 2009, Impact GM Nick De Santis commented that he expected chairman Saputo to pursue and realize his vision of Montreal as an MLS franchise someday.[5] By May 16, 2009, the Montreal Gazette reported Garber and Saputo had resumed talks for an expansion team to begin play in 2011.[6]

On May 7, 2010, Garber and Saputo announced Montreal as the nineteenth club in Major League Soccer, set to begin play for the 2012 season.[7] The MLS franchise is privately owned by the Saputo family.[8]

On June 14, 2011, the Montreal Impact announced a five-year agreement with the Bank of Montreal to become their lead sponsor and jersey sponsor in MLS.[9]

On March 10, 2012, the Impact played their first MLS game, a 2–0 loss against Vancouver Whitecaps FC.[10] A week later, the team made its home debut at the Olympic Stadium, playing to in a 1–1 draw with Chicago Fire; the match attracted 58,912 spectators, surpassing the previous record for professional soccer in Montreal established in a 1981 Montreal Manic home game against the Chicago Sting (58,542).[11] On May 12, 2012, the Impact played in front of a crowd of 60,860 spectators during a game against the Los Angeles Galaxy, establishing a record attendance for a professional soccer match in Canada.[12] In the 2012 regular season, Montreal had finished in seventh in the Eastern conference with a record of 12 wins, 16 losses, and 6 ties.

On February 23, 2013, Montreal won the 2013 Walt Disney World Pro Soccer Classic, beating Columbus Crew 1–0 in the final during their pre season campaign. Montreal Impact also have won the 2013 Canadian Championship on May 29, being their first major trophy as an expansion team in MLS, second in the club's existence.[13] This victory also gave Montreal its eighth Voyageurs Cup.[citation needed] In the 2013 MLS season, they had finished the regular season with a record of 14 wins, 13 losses, and 7 ties. Montreal Impact earned their first ever berth in the playoffs by clinching fifth seed in the Eastern Conference. During the playoffs, Montreal were eliminated by the Houston Dynamo in the knockout round. By being champions of the 2013 Canadian Championship, Montreal earned their first ever berth as an MLS expansion team for the 2014–15 CONCACAF Champions League.

In 2014, The Impact became repeated champions of the Voyageurs Cup by beating Toronto FC in the 2014 Canadian Championship final on June 4, 2014.[14] In the 2014 MLS season, Montreal Impact finished their season with a 6–18–10 (W-L-D) record being the worst team in MLS that season, being last in both Eastern conference and overall in the league. With the chances of appearing in the playoffs gone and still competing in the 2014–15 edition of the CONCACAF Champions League, Montreal Impact had placed their focus in the regional tournament, consequently winning their group, advancing in the knockout stage.

The Impact played the 2015 CONCACAF Champions League final before of a record 61,004

On March 3, 2015, Montreal became the first Canadian team, and only the second MLS team (after the 2013 Seattle Sounders FC) to eliminate a Liga MX side from the CONCACAF Champions League knockout stage when they eliminated Pachuca on away goals. They drew the first leg 2–2 in Pachuca and drew 1–1 at home on the return leg, sending the Impact through on away goals. On April 29, 2015, Montreal became the first Canadian team to reach the CONCACAF Champions League Final where they lost to Club América, after a 1–1 draw at Estadio Azteca and a 4–2 loss in front of 61,004 fans at the Olympic Stadium in Montreal.[citation needed]

In their 2015 MLS regular season campaign, Montreal finished third in the Eastern conference with 15 wins, 13 losses, and 6 ties returning to the playoffs. During the summer transfer window, the franchise acquired Didier Drogba who went on an scored 11 goals in his first 11 appearances for the club that season. In the conference knockout rounds of the playoffs, Montreal defeated Toronto FC 3–0 advancing to face Columbus Crew in their two-game conference semifinal series.

In regards to keeping the name "Impact", Montreal stated its intention "to maintain its name and global team image." The official logo for the team was revealed at the start of a match between the NASL Montreal Impact team and the NSC Minnesota Stars on August 6, 2011.[15][16][17]

The logo is a shield in blue, black, white and silver containing a stylized fleur-de-lis and four silver stars, overlaid with the Impact wordmark. The fleur-de-lis, which also appeared on the logo of the NASL Impact team, is a globally recognized symbol of French heritage, and features prominently on the flag of Quebec as a reflection of Québécois culture. The four stars represent the four founding communities of Montreal identified on the city's coat of arms. At the top of the shield, the team's motto, "Tous Pour Gagner" (French for "all for victory") is inscribed. In 2020, the Impact unveiled a new slogan, "Passion. Fierté. Authenticité." (French for "Passion. Pride. Authenticity.").

Home, away, and alternative uniforms.

Impact's main supporters group is called Ultras Montréal, also known as UM02, and was founded in 2002. They follow the Impact on away games against New York Red Bulls, Philadelphia Union, New England Revolution, D.C. United and Toronto FC. 127 Montréal was formed in 2011 who follow the Impact on occasional away games. The Montreal Impact Supporters Association was created in 2011 to better facilitate the relations between the Club and the Supporters Groups, to promote the supporters culture, and to help with the financing of different supporter group initiatives. 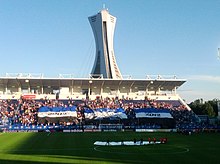 Banner for Ultras Montreal's 10th anniversary at Saputo Stadium before game between Montreal Impact and Columbus Crew on July 8, 2012

Named after the founding year of Montreal, 1642 MTL is a supporters group formed in 2015 and located in section 114 at Saputo Stadium during home games.[18]

The official mascot of the Montreal Impact is Tac-Tik the dog.[19] 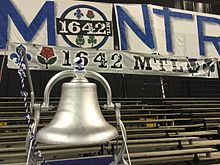 The North Star is a 5-foot (1.5 m) high, 44-inch (110 cm) wide, 1,576-pound (715 kg) bell acquired by the 1642MTL supporters group as a goal and victory celebration. It was inaugurated on October 25, 2015 by Montreal mayor Denis Coderre where it was rung twice in a Montreal Impact victory against Toronto FC.[20] Since then, numerous famous Montrealers have been invited to ring the bell such as local radio personalities Tony Marinaro and Jean-Charles Lajoie as well as Canadian soccer player Josée Bélanger and mixed martial artist Georges St-Pierre.[21]

Montreal Impact's biggest rival is Toronto FC because Canada's two largest cities have rivalries in and out of sport. Montreal and Toronto professional soccer teams have competed against each other for over 40 years. From the original NASL, as well as the Canadian Soccer League and the A-League, the rivalry has continued throughout various leagues they have played up until the past few years where the cities would still regularly meet for the Canadian Championships. Since both teams have joined the MLS, the rivalry has intensified and the matches have become a Canadian soccer classic which has been also named the 401 Derby.[22]

The following table lists the history of official soccer meetings in MLS and the Canadian Championship between Montreal and Toronto, updated to the most recent derby of October 21, 2018 (Montreal Impact 2-0 Toronto FC).

Montreal Impact Academy is the youth academy and development system of the Montreal Impact, that was established in 2010. The academy consists of various teams, from U8 to U23. The U23 team competes in the USL Premier Development League, the fourth tier of the Canadian soccer pyramid and the U18 and U16 teams both compete in the U.S. Soccer Development Academy.[23]

Ottawa Fury FC, of the United Soccer League at the time, entered into an affiliation agreement on December 9, 2016.[24] That agreement ended when the team went into hiatus and then shut down at the end of 2019. The Impact used to own and operate their own reserve side, FC Montreal, in the USL. FC Montreal operated for the 2015 and 2016 seasons before being disbanded. 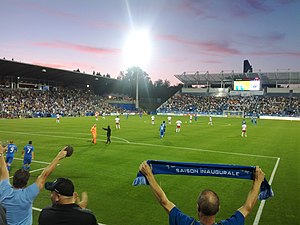 Montreal plays its home games at Saputo Stadium, a soccer-specific stadium – with a natural grass playing surface – built in 2008 for the second division Impact but designed with expansion in mind with the club anticipating a move to MLS. The Quebec government announced $23 million in funding to expand the stadium to more than 20,000 seats as well as building a training field – with synthetic turf – next door.[8]

The Impact had hoped Saputo Stadium's expansion would be finished in time for the start of their inaugural 2012 MLS season, but it was announced on July 17, 2011 that the expansion would be delayed. As a consequence, the neighbouring Olympic Stadium was used for the Impact's first six home dates (5 MLS Regular Season, 1 Canadian Championship)[25] The Impact's first MLS game at Saputo Stadium was finally played on June 16, 2012, a 4–1 win over Seattle.[26]

As of the 2017 season, TVA Sports is the exclusive French-language broadcaster of all Montreal Impact matches, as the team's regional rightsholder, and newly instated national French rightsholder.[28][29] TVA Sports aired 24 games during the team's inaugural season, with play by play duties currently held by Fréderic Lord and colour commentary provided by Vincent Destouches.[29] English-language coverage of select Impact games (particularly those against other Canadian opponents) are broadcast by TSN as part of its national MLS package, and its team rights to Toronto FC and the Vancouver Whitecaps.[29] The Impact do not have a separate English-language rights deal for the games not covered by TSN's main rights packages. Some Impact games were previously televised in French by Réseau des sports before it lost the French national rights to TVA Sports.

Prior to MLS, the previous team had competed in USL and the NASL which has been recognized by the franchise.

This is a partial list of the last five seasons completed by the Impact. For the full season-by-season history, see List of Montreal Impact seasons.

The Giuseppe Saputo Trophy is awarded to the club's Most Valuable Player.

Defensive player of the year

Awarded to the club's best defender.