Montevarchi is a town and comune in the province of Arezzo, Tuscany, Italy.

The town of Montevarchi sprang up around 1100, near to a fortified Benedictine monastery, founded by bishop Elempert (986–1010)[3] of Arezzo. At first the castle belonged to the Marquis Bourbon del Monte di Santa Maria, then to the Count Guidi family. In 1273 ownership passed to the Signoria of Florence. One of the town's first podestà (mayor) was Brunetto Latini.

During the rule of the Medici, the town expanded considerably due to its flourishing agricultural trade and its wool and silk industries, controlled by the Woolmaker's Guild. Montevarchi remained under Florentine control until the end of the first half of the 18th century; then the town became part of the territory of Arezzo.

After the unification of Italy, it became an important centre for manufacture of felt hats and, during the post World War II period, of shoes, hats, ladies' and children's wear. Today it is still a clothes production hub, while also important in the production of electricity (one hydroelectric and one thermoelectric plant). 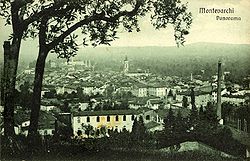 Montevarchi at the beginning of the 20th century. 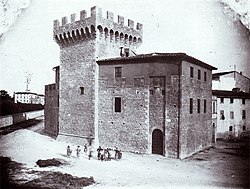 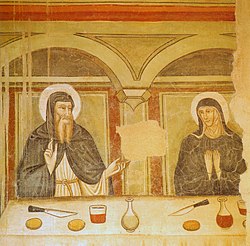 Montevarchi is twinned with:[5]