El Salvador International Airport Saint Oscar Arnulfo Romero y Galdámez (Spanish: Aeropuerto Internacional de El Salvador San Óscar Arnulfo Romero y Galdámez),[6] (IATA: SAL, ICAO: MSLP), previously known as Comalapa International Airport (Spanish: Aeropuerto Internacional de Comalapa) is an airport that serves San Salvador, El Salvador. It is located in the south central area of the country, in the city of San Luis Talpa, Department of La Paz, and occupies a triangular plain of 2519.8 acres, which borders the Pacific Ocean to the south, to the east with the Jiboa river, and to the northwest with the coastal highway. Being close to sea level, it allows aircraft to operate efficiently at maximum capacity. It is connected to the capital of San Salvador, El Salvador through a modern four-lane motorway, with 42 kilometers (26 miles) travel in an average time of 30 minutes.

It is the third of Central America in movement of passengers with 3,411,015 annually, counted without methodology, suggested by ICAO. It is classified as category 1 by the Federal Aviation Administration of the United States (FAA) and is certified by the Civil Aviation Authority (CAA). Being the first in the isthmus to achieve these certifications[7] In the Skytrax World Airport Awards 2015 it was recognized as the third best airport in Central America and the Caribbean.[8] According to the World Economic Forum, it is the second in the region with the most competitive infrastructure achieving a score of 4.8 - 7.0 being the highest score - exceeded only by Panama (6.2).[9] In addition, ICAO recognizes it as one of the airports with the best security standards in the continent, only exceeded by United States and Canada.

The airport was built in the late 1970s to replace its predecessor, Ilopango International Airport, which is now used for regional, air taxi, military, and charter aviation. The airport was built on the initiative and request of the then President, Arturo Armando Molina. Funding for this project was provided through the Government of Japan, Engineering and building came under the direction of Hazama Ando (then Hazama Gumi). The electrical work for all lighting and communications was completed by Toshiba (then TOKYO SHIBAURA ELECTRIC). The Airport entered in operation on 31 January 1980 as Cuscatlan International Airport (Spanish: Aeropuerto Internacional Cuscatlán), with its first flight being a TACA airliner bound for Guatemala City.

In 1995, the Salvadoran company B&B Arquitectos Asociados designed the expansion of waiting rooms and boarding bridges, of which only the area located to the west was built. The airport is the only connection center in Central America, or hub, for the airline Avianca, and also serves other airlines that fly to almost 30 destinations between Central America, North America, South America and Europe. Since 1998 when the first expansion of the airport occurred (AIES II), the airport has been suffering from saturation in areas of check-in, screening, immigration and baggage as it continues to serve more than 2 million passengers arriving each year. In late 2012, the Autonomous Port Executive Commission (CEPA) began their rehabilitation, modernization and optimization project for the airport, which was completed in April 2015.

Expanding the International Airport of El Salvador (AIES) will cost $492.7 million and will occur in four phases from 2014-2032, as provided by new master plan for development of the terminal, which was presented by the CEPA in December 2013. Unlike the Master Plan from 2007 by Airports of Paris, the new proposal by Kimley Horn does not include building a new passenger terminal. Instead, it will restore and rehabilitate and expand the terminal. The new renovated terminal will have a three-story building where it will separate the traffic flows of passengers arriving and departing.

Includes the expansion of a passenger terminal at 45,000 square meters, on the south side of the terminal, which will boost its current capacity of 1.6 through 3.6 million passengers. At this stage, creation of more businesses, parking lot improvements, refurbishment of the check in-area, landscaping, improvements to surrounding streets, signage purchase and new lighting systems are also contemplated. Also in the works are plans to add equipment for the new cargo terminal. Additionally planned is to develop 80.9 acres of surrounding areas for interested companies potentially to move into the vicinity of the airport. This phase will cost approximately US$115.5 million.

Phase II includes the construction of seven additional gatehouses for passengers, as well as new aircraft parking positions to exceed more than 20 new gates. This phase will cost approximately US$100.9 million.

According to CEPA, Phase III and IV are of "medium and long term", which consider extensions depending on future demand at the airport. Phase III will invest US$78.3 million and Phase IV will invest US$198.5 million. During this stage, CEPA is planning and projecting to construct a new train station within the airport. This will allow passengers to transit to places like San Salvador, San Miguel and La Unión. By 2032, the airport is projected to have 43 gates. By 2032, it is expected the airport would be capable of receiving 6.6 million passengers. 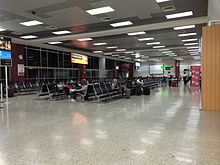 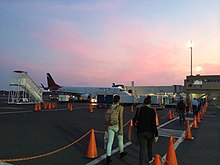 When the airport was built, it originally had only 7 gates. It was designed to handle around 400,000 passengers a year, but the high increase of passengers in the last 15 years brought the airport to its maximum capacity. The airport has had two main expansions in the last decade or so. In its first phase (named AIES I), the airport grew from 7 boarding gates to 12, and later the second phase, AIES II, added 5 more gates bringing the total to 17. Along with new gates, new expanded passenger waiting areas were built. Even though all these expansions have been made, the airport once again has reached the peak of its capacity, handling over 2 million passengers in 2006.

There are several drug enforcement agents conducting random security checks and interviews of travelers at the airport. These agents can be identified due to the items they wear such as a fanny pack, either around the waist or over the shoulder. They also carry an airport access identification card around the neck. One side of the badge carrier shows the airport identification and access card with their photo, the other side of the carrier has the Salvadorean drug enforcement agency official badge.

The platform of the Passenger Terminal Building (ETP) has twenty three aircraft parking positions, fourteen of which have boarding bridges, which connect the aircraft directly to the waiting rooms. The nine remaining positions are "remote", i.e., passengers who disembark at any of them are transferred to the ETP through aerobuses. The remote gates are used mostly by turboprop aircraft. The ETP has a total constructed area of 34,380 m2 (370,100 sq ft), which houses the waiting rooms and corridors, immigration and customs areas and a variety of shops. The runway is capable of handling landings and takeoffs by B747 and B777 aircraft. Taiwan's President Tsai Ing Wen made an official diplomatic tour of Central America in an Eva Air B777-300ER aircraft.

The platform of the Cargo Terminal Building (ETC) has three positions for cargo aircraft parking, and also has a platform for the maintenance of five aircraft if required, just in front of hangars Aeromantenimiento (AEROMAN), a modern repairs workshop. The ETC has a total built area, comprising warehouses and offices, of 10,286 m2 (110,720 sq ft).

The airport's modern facilities include duty-free shops, fast food and full-service restaurants, bars, air conditioned areas, tourist facilities, car rental, and spacious waiting rooms. There is space for 17 airplanes in the main terminal, 3 in the cargo terminal, 37 in Aeromantenimiento, S.A., and around 20 in the "Long Term Parking" which is runway 18/36. 94.5% of the airport's flights are on time (2005 data). The airport and runway have been closed at least 10 times in the almost quarter century since opening. They were closed for several hours following the devastating earthquake of 2001, followed up with minor repairs to the east end of the runway. They were closed again for several hours in 2005 due to Hurricane Stan. Although the airport is located near the Pacific Ocean, storms and hurricanes are not frequent.

There is Wifi availability throughout much of the airport via Claro El Salvador. Near Gate 17, a café called "The Coffee Cup" has free WiFi for all customers.

Airport passengers can make purchases from a wide range of duty-free shopping, including clothing, perfume, and spirits. There are also a variety of craft shops and restaurants. Other services include twelve car rental companies. Hotel chains such as Marriott International, Radisson, InterContinental, Hilton, Terrace, and Comfort offer representative and check-in desks at the airport.

The International Airport of El Salvador, based in the town of San Luis Talpa, La Paz, received an international certification from the Civil Aviation Authority (CAA), after an investment of $8 million and a process of four years and two extensions.

The document credits the Salvadorian airport terminal with compliance with all safety regulations issued under the Civil Aviation Organisation (ICAO), on fire control and health care, removal of rubber from the runways, lights and safety signs.

The certification will enable El Salvador to keep the category 1 status from the Federal Aviation Administration of the United States. "From the start of operations of the airport in January 1980, the terminal has been characterized by its safety," said Ricardo Sauerbrey, head of the Salvadorian terminal. 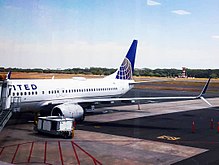 Boeing 737-800 of United on gate 10 at Monseñor Oscar Arnulfo Romero International Airport, in 2018 it was the second largest airline in the airport, behind Avianca El Salvador

Monseñor Óscar Arnulfo Romero International Airport hasn't had any fatalities or accidents. However, there has been one emergency landing from a flight passing near the airport.