Moldova has a well-established wine industry. With a production of around 2 million hectolitres of wine (as of 2018), it is the 11th largest European wine-producing country.[1] Moldova has a vineyard area of 148,500 hectares (367,000 acres) of which 107,800 hectares (266,000 acres) are used for commercial production.[2] The remaining 40,700 hectares (101,000 acres) are vineyards planted in villages around the houses used to make home-made wine. Many families have their own recipes and strands of grapes that have been passed down through the generations.

In 2014, Moldova was the twentieth largest wine producing country in the world. Most of the country's commercial wine production is for export; 67 million bottles of wine are exported annually,[citation needed] including to Poland, Romania, Russia and United States. 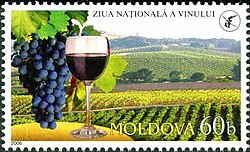 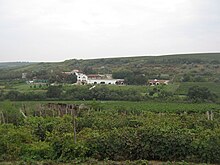 The Purcari winery surrounded by its vineyards. The vineyard in the forefront is a "village" vineyard used for home-made wine

Fossils of Vitis teutonica vine leaves near the Naslavcia village in the north of Moldova indicate that grapes grew here approximately 6 to 25 million years ago. The size of grape seed imprints found near the Varvarovca village, which date back to 2800 BC, prove that at that time the grapes were already being cultivated. The grapegrowing and wine-making in the area between the Nistru and Prut rivers, which began 4000–5000 years ago, had periods of rises and falls but has survived through all the changing social and economic conditions.[citation needed]

By the end of the 3rd century BC, trading links were established between the local population and the Greeks and from 107 AD with the Romans, a fact which strongly influenced the intense development of the grape-growing and wine-making.[citation needed]

After the formation of the Moldavian feudal state in the 14th century, grape-growing began to develop and flourished in the 15th century during the kingdom of Stephen the Great, who promoted the import of high quality varieties and the improvement of the quality of wine, which was one of the chief exports of Moldova throughout the medieval period, especially to Poland, Ukraine and Russia.[citation needed]

After the Treaty of Bucharest in 1812, when the region became a province of the Russian Empire, the wine industry flourished again. The main varieties were the traditional ones: Rară Neagră, Plavai, Galbena, Zghiharda, Batuta Neagră, Fetească Albă, Fetească Neagră, Tămâioasa, Cabasia and many other local, Hungarian, Bulgarian, Greek, and Turkish varieties. In this period, the grape growers gained governmental support and by 1837 the vineyard area in Bessarabia reached 14,000 hectares, and the wine production reached 12 million litres. The second half of the 19th century saw an intensive planting of newly introduced French varieties, such as Pinot blanc, Pinot noir, Pinot gris, Aligote, Cabernet Sauvignon, Sauvignon blanc, Gamay, Muscat blanc. It was at this time that wines like Negru de Purcari and Romanesti, which have made Moldova famous as a fine wine producer, began to be produced.[citation needed]

After the phylloxera damage at the end of the 19th century, it was only in 1906 that the vineyards began to recover with grafted planting material. By 1914 Bessarabia had the biggest vineyard area in the Russian Empire.[citation needed]

Both World Wars damaged the Moldolvan vineyards and the wine industry considerably. The re-establishment of Moldavian vineyards began during Soviet years, in the 1950s. Over 150,000 hectares were planted in 10 years, and by 1960 the total vineyard area had reached 220,000 hectares.[citation needed]

In 2006, a diplomatic conflict with Russia resulted in the 2006 Russian ban of Moldovan and Georgian wines, damaging the wine industry of Moldova significantly, as Russia remains the largest importer of Moldovan wines by far[citation needed]. A fresh ban was imposed in September 2013, as a result of Moldova's announcement of plans to sign a draft association treaty with the European Union.[3][4]

In Moldova four regions for wine growing are to be found:

The most important region - the Southern area - is suitable for red sweet and semi-sweet wines. White wines have a high content of alcohol. Micro-regions like Taraclia, Ciumai, Comrat, Ceadir-Lunga, Baurci, Cazaiac, Tomai, Cimislia etc. are also in the southern region. 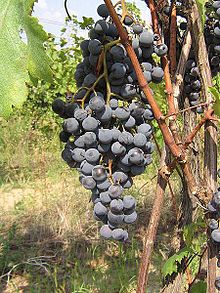 Moldovan viticulture is characterized by a large variety of grapes:[5]

Only a few local varieties can still be found in Moldova today:

Divin - represents the name, patented in the Republic of Moldova, of the country's brandy, produced in conformity with the classic technology of cognac production. 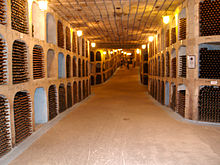 The Moldovan wine collection "Mileștii Mici", with almost 2 million bottles, is the largest wine collection in the world, according to the Guinness Book. It stretches for 250 km, of which only 120 km are currently in use.

The Cricova winery also has an extensive network of tunnels that stretch for 120 km.

Together, the wineries export more than one third of all Moldovan wine. The member wineries are united by their desire to raise Moldova's profile as a major European wine producing country. To accomplish this goal, the members work together to promote their wines on the international market through joint marketing initiatives and to educate the international wine trade and press about Moldova.