Macedonia (Roman province) Decebalus Diocletian
Historical region of the Balkans
Not to be confused with Moesha.

In ancient geographical sources, Moesia was bounded to the south by the Haemus (Balkans) and Scardus (Šar) mountains, to the west by the Drinus (Drina) river, on the north by the Donaris (Danube) and on the east by the Euxine (Black Sea).[4]

The region was inhabited chiefly by Thracians, Dacians (Thraco-Dacians), Illyrian and Thraco-Illyrian peoples. The name of the region comes from Moesi, Thraco-Dacian peoples who lived there before the Roman conquest.

Parts of Moesia belonged to the polity of Burebista, a Getae king who established his rule over a large part of the northern Balkans between 82 BC and 44 BC. He led plunder and conquest raids across Central and Southeastern Europe, subjugating most of the neighbouring tribes. After his assassination in an inside plot, the empire was divided into several smaller states.

In 75 BC, C. Scribonius Curio, proconsul of Macedonia, took an army as far as the Danube and gained a victory over the inhabitants, who were finally subdued by M. Licinius Crassus, grandson of the triumvir and later also proconsul of Macedonia during the reign of Augustus c. 29 BC.[4] The region, however, was not organized as a province until the last years of Augustus' reign; in 6 AD, mention is made of its governor, Caecina Severus.[5] As a province, Moesia was under an imperial consular legate (who probably also had control of Achaea and Macedonia).[4]

In 86 AD the Dacian king Duras ordered his troops to attack Roman Moesia. After this attack, the Roman emperor Domitian personally arrived in Moesia and reorganized it in 87 AD into two provinces, divided by the river Cebrus (Ciabrus):[4] to the west Moesia Superior - Upper Moesia, (meaning up river) and to the east Moesia Inferior - Lower Moesia (also called Ripa Thracia), (from the Danube river's mouth and then upstream). Each was governed by an imperial consular legate and a procurator.[4]

From Moesia, Domitian began planning future campaigns into Dacia and by 87 he started a strong offensive against Dacia, ordering General Cornelius Fuscus to attack. Therefore, in the summer of 87, Fuscus led five or six legions across the Danube. The campaign against the Dacians ended without a decisive outcome, and Decebalus, the Dacian King, had brazenly flouted the terms of the peace (89 AD) which had been agreed on at the war's end.

Emperor Trajan later arrived in Moesia, and he launched his first military campaign into the Dacian Kingdom[6] c. March–May 101, crossing to the northern bank of the Danube River and defeating the Dacian army near Tapae, a mountain pass in the Carpathians (see Second Battle of Tapae). Trajan's troops were mauled in the encounter, however, and he put off further campaigning for the year to heal troops, reinforce, and regroup.[7] During the following winter, King Decebalus launched a counter-attack across the Danube further downstream, but this was repulsed. Trajan's army advanced further into Dacian territory and forced King Decebalus to submit to him a year later.[citation needed]

Trajan returned to Rome in triumph and was granted the title Dacicus. The victory was celebrated by the Tropaeum Traiani. However, Decebalus in 105 undertook an invasion against Roman territory by attempting to stir up some of the tribes north of the river against the empire.[8] Trajan took to the field again and after building with the design of Apollodorus of Damascus his massive bridge over the Danube, he conquered part of Dacia in 106 (see also Second Dacian War).[citation needed]

Sometime around 272, at the Moesian city of Naissus or Nissa (modern Niš in Serbia), future emperor Constantine I was born.

After the abandonment of Roman Dacia to the Goths by Aurelian (270–275) and the transfer of the Roman citizens from the former province to the south of the Danube, the central portion of Moesia took the name of Dacia Aureliana (later divided into Dacia Ripensis[4] and Dacia Mediterranea).

During administrative reforms of Emperor Diocletian (284–305), both of the Moesian provinces were reorganized. Moesia Superior was divided in two, northern part forming the province of Moesia Prima including cities Viminacium and Singidunum, while the southern part was organised as the new province of Dardania with cities Scupi and Ulpiana. At the same time, Moesia Inferior was divided into Moesia Secunda and Scythia Minor. Moesia Secunda's main cities included Marcianopolis (Devnya), Odessus (Varna), Nicopolis (Nikopol), Abrittus (Razgrad), Durostorum (Silistra), Transmarisca (Tutrakan), Sexaginta Prista (Ruse) and Novae (Svishtov), all in Bulgaria today.[citation needed] 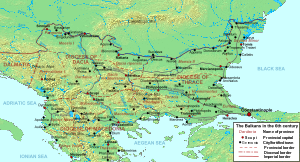 The Moesian provinces and the northern Balkans in Late Antiquity

As a frontier province, Moesia was strengthened by stations and fortresses erected along the southern bank of the Danube, and a wall was built from Axiopolis to Tomi as a protection against the Scythians and Sarmatians.[4] The garrison of Moesia Secunda included Legio I Italica and Legio XI Claudia, as well as independent infantry units, cavalry units, and river flotillas. The Notitia Dignitatum lists its units and their bases as of the 390s CE. Units in Scythia Minor included Legio I Iovia and Legio II Herculia.[citation needed]

After 238 AD, Moesia was frequently invaded or raided by the Dacian Carpi, and the East Germanic tribe of the Goths, who invaded Moesia in 250. Hard-pressed by the Huns, the Goths again crossed the Danube during the reign of Valens (376) and with his permission settled in Moesia.[4] After they settled, quarrels soon took place, and the Goths under Fritigern defeated Valens in a great battle near Adrianople. These Goths are known as Moeso-Goths, for whom Ulfilas made the Gothic translation of the Bible.[4]

The Slavs allied with the Avars invaded and destroyed much of Moesia in 583–587 in the Avar–Byzantine wars. Moesia was settled by Slavs during the 7th century. Bulgars, arriving from Old Great Bulgaria, conquered Lower Moesia by the end of the 7th century. During the 8th century the Byzantine Empire lost also Upper Moesian territory to the First Bulgarian Empire.[citation needed]