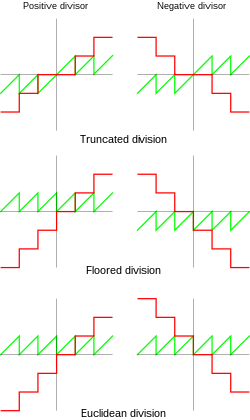 Quotient (q) and      remainder (r) as functions of dividend (a), using different algorithms

In computing, the modulo operation returns the remainder or signed remainder of a division, after one number is divided by another (called the modulus of the operation).

Given two positive numbers a and n, a modulo n (abbreviated as a mod n) is the remainder of the Euclidean division of a by n, where a is the dividend and n is the divisor.[1] The modulo operation is to be distinguished from the symbol mod, which refers to the modulus[2] (or divisor) one is operating from.

(Here, notice that doing division with a calculator will not show the result of the modulo operation, and that the quotient will be expressed as a decimal fraction if a non-zero remainder is involved.)

Although typically performed with a and n both being integers, many computing systems now allow other types of numeric operands. The range of numbers for an integer modulo of n is 0 to n − 1 inclusive (a mod 1 is always 0; a mod 0 is undefined, possibly resulting in a division by zero error in some programming languages). See modular arithmetic for an older and related convention applied in number theory.

When either a or n is negative, the naive definition breaks down, and programming languages differ in how these values are defined.

Variants of the definition

In mathematics, the result of the modulo operation is an equivalence class, and any member of the class may be chosen as representative; however, the usual representative is the least positive residue, the smallest non-negative integer that belongs to that class (i.e., the remainder of the Euclidean division).[3] However, other conventions are possible. Computers and calculators have various ways of storing and representing numbers; thus their definition of the modulo operation depends on the programming language or the underlying hardware.

In nearly all computing systems, the quotient q and the remainder r of a divided by n satisfy the following conditions:

However, this still leaves a sign ambiguity if the remainder is nonzero: two possible choices for the remainder occur, one negative and the other positive, and two possible choices for the quotient occur. In number theory, the positive remainder is always chosen, but in computing, programming languages choose depending on the language and the signs of a or n.[1] Standard Pascal and ALGOL 68, for example, give a positive remainder (or 0) even for negative divisors, and some programming languages, such as C90, leave it to the implementation when either of n or a is negative (see the table under § In programming languages for details). a modulo 0 is undefined in most systems, although some do define it as a.

As described by Leijen,

However, Boute concentrates on the properties of the modulo operation itself, and does not rate the fact that the truncated division shows the symmetry (-a) div n = -(a div n) and a div (-n) = -(a div n), which is similar to the ordinary division. As neither floor division nor Euclidean division offer this symmetry, Boute's judgement is at least incomplete.[citation needed][original research?]

When the result of a modulo operation has the sign of the dividend, it can lead to surprising mistakes.

For example, to test if an integer is odd, one might be inclined to test if the remainder by 2 is equal to 1:

But in a language where modulo has the sign of the dividend, that is incorrect, because when n (the dividend) is negative and odd, n mod 2 returns −1, and the function returns false.

One correct alternative is to test that the remainder is not 0 (because remainder 0 is the same regardless of the signs):

Another alternative is to use the fact that for any odd number, the remainder may be either 1 or −1:

This section is about the binary mod operation. For the (mod m) notation, see congruence relation.

Some calculators have a mod() function button, and many programming languages have a similar function, expressed as mod(a, n), for example. Some also support expressions that use "%", "mod", or "Mod" as a modulo or remainder operator, such as

or equivalent, for environments lacking a mod() function ('int' inherently produces the truncated value of a/n)

Modulo operations might be implemented such that a division with a remainder is calculated each time. For special cases, on some hardware, faster alternatives exist. For example, the modulo of powers of 2 can alternatively be expressed as a bitwise AND operation:

In devices and software that implement bitwise operations more efficiently than modulo, these alternative forms can result in faster calculations.[7]

Optimizing compilers may recognize expressions of the form expression % constant where constant is a power of two and automatically implement them as expression & (constant-1), allowing the programmer to write clearer code without compromising performance. This simple optimization is not possible for languages in which the result of the modulo operation has the sign of the dividend (including C), unless the dividend is of an unsigned integer type. This is because, if the dividend is negative, the modulo will be negative, whereas expression & (constant-1) will always be positive. For these languages, the equivalence x % 2n == x < 0 ? x | ~(2n - 1) : x & (2n - 1) has to be used instead, expressed using bitwise OR, NOT and AND operations.

Some modulo operations can be factored or expanded similarly to other mathematical operations. This may be useful in cryptography proofs, such as the Diffie–Hellman key exchange.

Sometimes it is useful for the result of a modulo n to lie not between 0 and n−1, but between some number d and d+n−1. In that case, d is called an offset. There does not seem to be a standard notation for this operation, so let us tentatively use a modd n. We thus have the following definition:[15] x = a modd n just in case d ≤ x ≤ d+n−1 and x mod n = a mod n. Clearly, the usual modulo operation corresponds to zero offset: a mod n = a mod0 n. The operation of modulo with offset is related to the floor function as follows:

(This is easy to see. Let

; but that means that

The modulo with offset a modd n is implemented in Mathematica as[15] Mod[a, n, d].