Modular design, or modularity in design, is a design theory and practice that subdivides a system into smaller parts called modules (such as modular process skids), which can be independently created, modified, replaced or exchanged between different systems.

A modular design can be characterized by functional partitioning into discrete scalable and reusable modules, rigorous use of well-defined modular interfaces, and making use of industry standards for interfaces. In this context modularity is at the component level, and has a single dimension, component slottability. A modular system with this limited modularity is generally known as a platform system that uses modular components. Examples are car platforms or the USB port in computer engineering platforms.

Modularity offers benefits such as reduction in cost (customization can be limited to a portion of the system, rather than needing an overhaul of the entire system), interoperability, shorter learning time, flexibility in design, non-generationally constrained augmentation or updating (adding new solution by merely plugging in a new module), and exclusion. Modularity in platform systems, offer benefits in returning margins to scale, reduced product development cost, reduced O&M costs, and time to market. Platform systems have enabled the wide use of system design in markets and the ability for product companies to separate the rate of the product cycle from the R&D paths. The biggest drawback with modular systems is the designer or engineer. Most designers are poorly trained in systems analysis and most engineers are poorly trained in design. The design complexity of a modular system is significantly higher than a platform system and requires experts in design and product strategy during the conception phase of system development. That phase must anticipate the directions and levels of flexibility necessary in the system to deliver the modular benefits. Modular systems could be viewed as more complete or holistic design whereas platforms systems are more reductionist, limiting modularity to components. Complete or holistic modular design requires a much higher level of design skill and sophistication than the more common platform system.

Cars, computers, process systems, solar panels, wind turbines, elevators, furniture, looms, railroad signaling systems, telephone exchanges, pipe organs, synthesizers, electric power distribution systems and modular buildings are examples of platform systems using various levels of component modularity. For example, one cannot assemble a solar cube from extant solar components or easily replace the engine on a truck or rearrange a modular housing unit into a different configuration after a few years, as would be the case in a modular system. The only extant examples of modular systems in today's market are some software systems that have shifted away from versioning into a completely networked paradigm.

Modular design inherently combines the mass production advantages of standardization, since modularity is impossible without some level of standardization, (high volume normally equals low manufacturing costs) with those of customization. The degree of modularity, dimensionally, determines the degree of customization possible. For example, solar panel systems have 2-dimensional modularity which allows adjustment of an array in the x and y dimensions. Further dimensions of modularity would be introduced by making the panel itself and its auxiliary systems modular. Dimensions in modular systems are defined as the effected parameter such as shape or cost or lifecycle. Mero systems have 4-dimensional modularity, x, y, z, and structural load capacity. As can be seen in any modern convention space, the space frame's extra two dimensions of modularity allows far greater flexibility in form and function than solar's 2-d modularity. If modularity is properly defined and conceived in the design strategy, modular systems can create significant competitive advantage in markets. A true modular system does not need to rely on product cycles to adapt its functionality to the current market state. Properly designed modular systems also introduce the economic advantage of not carrying dead capacity, increasing the capacity utilization rate and its effect on cost and pricing flexibility. 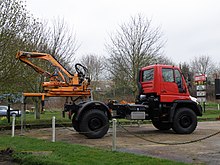 The modular design of the Unimog offers attachment capabilities for various different implements.

Aspects of modular design can be seen in cars or other vehicles to the extent of there being certain parts to the car that can be added or removed without altering the rest of the car.

A simple example of modular design in cars is the fact that, while many cars come as a basic model, paying extra will allow for "snap in" upgrades such as a more powerful engine or seasonal tires; these do not require any change to other units of the car such as the chassis, steering, electric motor or battery systems.

In machines and architecture

Modular design can be seen in certain buildings. Modular buildings (and also modular homes) generally consist of universal parts (or modules) that are manufactured in a factory and then shipped to a build site where they are assembled into a variety of arrangements.[1]

For example, an office building can be built using modular parts such as walls, frames, doors, ceilings, and windows. The interior can then be partitioned (or divided) with more walls and furnished with desks, computers, and whatever else is needed for a functioning workspace. If the office needs to be expanded or redivided to accommodate employees, modular components such as wall panels can be added or relocated to make the necessary changes without altering the whole building. Later, this same office can be broken down and rearranged to form a retail space, conference hall or another type of building, using the same modular components that originally formed the office building. The new building can then be refurnished with whatever items are needed to carry out its desired functions.

Other types of modular buildings that are offered from a company like Allied Modular include a guardhouse, machine enclosure, press box, conference room, two-story building, clean room and many more applications.[2]

Many misconceptions are held regarding modular buildings.[3] In reality modular construction is a viable method of construction for quick turnaround and fast growing companies. Industries that would benefit from this include healthcare, commercial, retail, military, and multi-family/student housing.

In 1963 Motorola introduced the first rectangular color picture tube, and in 1967 introduced the modular Quasar brand. In 1964 it opened its first research and development branch outside of the United States, in Israel under the management of Moses Basin. In 1974 Motorola sold its television business to the Japan-based Matsushita, the parent company of Panasonic.

Modular design in computer hardware is the same as in other things (e.g. cars, refrigerators, and furniture). The idea is to build computers with easily replaceable parts that use standardized interfaces. This technique allows a user to upgrade certain aspects of the computer easily without having to buy another computer altogether. This idea was also being implemented in Project Ara, which provided a platform for manufactures to create modules for a smartphone which could then be customised by the end user.

A computer is one of the best examples of modular design. Typical modules include power supply units, processors, mainboards, graphics cards, hard drives, and optical drives. All of these parts should be easily interchangeable as long as the user uses parts that support the same standard interface. Similar to the computer's modularity, other tools have been developed to leverage modular design, such as littleBits Electronics, which snap together with interoperable modules to create circuits.[4]

Some authors observe that modular design has generated in the vehicle industry a constant increase of weight over time. Trancossi advanced the hypothesis that modular design can be coupled by some optimization criteria derived from the constructal law.[8] In fact, the constructal law is modular for his nature and can apply with interesting results in engineering simple systems.[9] It applies with a typical bottom-up optimization schema:

A better formulation has been produced during the MAAT EU FP7 Project.[10] A new design method that couples the above bottom-up optimization with a preliminary system level top-down design has been formulated.[11] The two step design process has been motivated by considering that constructal and modular design does not refer to any objective to be reached in the design process. A theoretical formulation has been provided in a recent paper,[8] and applied with success to the design of a small aircraft,[12] the conceptual design of innovative commuter aircraft,[13][14] the design of a new entropic wall,[15] and an innovative off-road vehicle designed for energy efficiency.[16]