The Mitsubishi SpaceJet (Japanese: 三菱スペースジェット), formerly known as the Mitsubishi Regional Jet (Japanese: 三菱リージョナルジェット), or MRJ for short, is a twin-engine regional jet aircraft seating 70–90 passengers manufactured by Mitsubishi Aircraft Corporation, a partnership between majority owner Mitsubishi Heavy Industries and minority owner Toyota Motor Corporation[5] with design assistance from Subaru Corporation, itself already an aerospace manufacturer. The SpaceJet will be the first airliner designed and produced in Japan since the NAMC YS-11 of the 1960s, which was produced at a loss.[6][7] 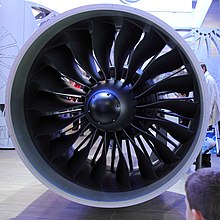 In September 2009 Mitsubishi unveiled extensive design changes, using aluminium instead of carbon fibre composites for the aircraft's wings and wingbox; the remaining composite parts will make up 10-15% of the airframe: the empennage.[17] The cabin height is increased by 1.5 in (4 cm) to 80.5 in (204 cm) and the fuselage height is increased to 116.5 in (296 cm), giving a rounder cabin, wider and higher than its competition.[17] The program was delayed six months with final design frozen in mid-2010, first flight delayed to the second quarter of 2012 and deliveries to early 2014.[17][18] Maintenance intervals are 750 flight hours per A Check and 7,500 flight hours per C check.[19]

As the MRJ90 MTOW of 39.6 t is above the US regional carriers scope clause of 39 t, SkyWest and Trans States Holdings could convert their MRJ90 orders for 100 and 50, respectively, to the 1.4 m shorter MRJ70: 67% of the 223 firm MRJ90 orders. But the MRJ70 seats only 69 in two classes and attain the 76 seats scope close limit only in all-economy: Mitsubishi wants to increase seating within its fuselage to compete with the currently compliant Embraer E-175 and Bombardier CRJ900.[22] Mitsubishi is working on a three-class, 76-seat design, with more premium seating than the MRJ70 but still within the scope-clause 86,000 lb (39 t) MTOW, to be unveiled at the June 2019 Paris Air Show.[23] The reworked MRJ70 will be called the Space Jet M100, its type certificate is expected in 2022 and Mitsubishi considers U.S. production.[24] Program cost is expected to reach ¥800 billion by the 2020 debut of the SpaceJet M90.[25]

On 15 September 2010, the Mitsubishi Aircraft Corporation announced that it had entered the production drawing phase and was proceeding with the manufacturing process.[26] Assembly of the first aircraft began in April 2011 with construction of the emergency escape for the cockpit.[27] In April 2012, first flight was delayed to 2013.[28] In December 2012, the MRJ90s delivery was scheduled for 2017.[29]

The maiden flight of the MRJ90 took place on 11 November 2015.[35][36] On 24 December, Mitsubishi announced a one-year delay for the first delivery of the MRJ, to mid-2018.[37] The delay was attributed to insufficient wing strength and the redesign of the landing gear for better safety.[38]

Much of the flight testing for the MRJ90 will take place in Moses Lake, Washington, at the Grant County International Airport, due to the crowded airspace in Japan causing scheduling difficulties.[39] Static strength tests were completed on November 1, 2016 and confirmed that the airframe could withstand 1.5 times the maximum load.[40]

In January 2017, a further two-year delay was announced, pushing the expected first delivery to mid 2020.[9] This resulted from moving the avionics bay and wiring looms and in March the flight certification program was extended from 2500 to 3000 flying hours.[41] Mitsubishi didn't confirm.[citation needed] Four of the five delays were caused, at least partly, by failures to document work for certification or similar failures. As a result, development cost ballooned to 350 billion yen (US$3.17 billion) and the project might never able to fully recover its costs.[42] Mitsubishi originally planned to use five flight test aircraft and two ground test aircraft but one or two additional aircraft will also be needed following this introduction of a two-year delay to mid-2020.[43]

Seattle engineering consultants Aerotec L.L.C. saw problems for avionics and its wiring certification: damage could cause single point of failure, due to fire, water flooding from a ruptured waterline, or from part penetration of an engine explosion. This necessitated hardware changes in the bays, now frozen, but the electrical wiring interconnection system had to be reconfigured with hired specialist Latecoere. In June 2017, 940 hours of flight tests have been done and the four prototypes have an above 98% availability.[44] On 21 August, FTA-2 experienced a flameout 170 km (92 nmi) west of Portland International where it landed; partial damage was confirmed in the PW1200G and the test fleet was grounded until the cause is known.[45] Flight testing resumed on 6 September.[46]

By December 2017, the MRJ test campaign was half done with 1,500 flight hours and less than 1% cancelled due to technical issues. Their rate is accelerating with tests set up before the January 2017 avionics bay redesign: special runway tests, extreme environment and high altitude tests, to be completed in 2018. An additional flight test aircraft incorporating the redesign will join the campaign in the second half of 2018, focused on wiring tests like lightning and high-intensity radio-frequency.[47] Two additional aircraft (10007 and 10010), recently painted white and under structural assembly in December, will be completed and will join the flight test campaign towards the end of 2018.[48] At the end of the year, the mid-2020 deadline seemed difficult to achieve.[49]

In January 2018, the avionics bay rearrangement and rerouted wiring were almost complete to be adequate for extreme events such as bomb explosions or water ingress underfloor.[50] Upgrades and ground tests were performed on four flight test aircraft from February to March at Moses Lake, preceding flight testing for natural icing, avionics and autopilot, performance, stability and control.[51]

In April 2018, the test fleet had logged 1,900 flight hours.[52] The flight-test fleet attained 2,000 hours in May 2018, and as most of the flight envelope was explored, the next trimester shifted to runway performance: takeoff, landing and minimum control speeds.[53] The MRJ70 test aircraft (number 8 and 9) were in final assembly as of May for expected delivery by the end of 2021, one year after the MRJ90 introduction.[22] An MRJ in All Nippon Airways livery was exhibited at the July Farnborough Airshow, alongside appearances by the similar Embraer 190 E2 and larger Airbus A220.[54]

In October 2018, Bombardier sued Mitsubishi in Seattle, alleging that its ex-employees stole trade secrets to help for US certification.[55] By then, the four MRJ90 prototypes had clocked 2,400 hours, targeting certification in late 2019 or early 2020 and first delivery in mid-2020, while the smaller MRJ70 should be introduced in 2022.[56] After the MRJ programme lost ¥47.2 billion for six months to 30 September 2018 on top of its ¥110 billion deficit, Mitsubishi Heavy Industries injected ¥220bn ($1.94 billion) in Mitsubishi Aircraft, raising its stake from 64% to 86.7% and capital from ¥100 billion to ¥270 billion.[57] Mitsubishi wants to dismiss the Bombardier allegations and should be heard in Seattle's US District Court on 11 January 2019.[58] By December 2018, the Japan Civil Aviation Bureau delivered its type inspection authorisation, allowing to debut certification flight testing in early 2019 with the four MRJ90 in Moses Lake.[59]

In April 2019, a federal judge dismissed Bombardier's claims against Mitsubishi, a strong case but falling short as there was no proof that Mitsubishi knew about those secrets.[60] By then, the program had completed 2,600 flight hours and was undergoing crosswind and climate testing, while two more MRJ90s should join this summer.[61]

On 24 June 2019, Bombardier and Mitsubishi announced that Mitsubishi would purchase the CRJ Programme from Bombardier for US$550 million and assume US$200 million in liabilities. With the deal, Mitsubishi will acquire the maintenance, support, refurbishment, marketing, and sales activities for the CRJ Series aircraft, including the support network locations in Montréal, Québec and Toronto, Ontario, its service centres located in Bridgeport, West Virginia, and Tucson, Arizona, and the type certificates.[62]

The 2 ft (0.61 m) longer fuselage can seat 88 in single-class, and at 91 ft (28 m), the wingspan is 4 ft (1.2 m) shorter with the modified canted wingtip. The shorter span will allow operating at Colorado's Aspen/Pitkin County Airport, a popular tourist destination, the only in-production jet with the capability after the CRJ700 production ends. MITAC partner Triumph Group's structural optimization should remove 15% of the combined structural weight of the wing, aft fuselage, and empennage. Deliveries should begin in 2024.[66]

The M90 in its final configuration first flew on 18 March 2020, before joining the rest of the test fleet in Moses Lake.[67]

In May 2020, Mitsubishi halved the budget of the SpaceJet programme for the year ending 31 March 2021. It confirmed its commitment to the baseline M90 version but is to reconsider the M100 in the light of the impact of the COVID-19 pandemic on the aviation industry.[68] All work on the SpaceJet outside Japan, including flight testing of the M90 at Moses Lake, will be repatriated to the company's headquarters in Nagoya.[69]

A new production facility for the aircraft was built at Komaki Airport in Nagoya, Japan, on land purchased from the government at a total cost of 60 billion yen.[70] The 2015 roll-out of the MRJ took place at Komaki, which had previously been the development site of the Mitsubishi A6M Zero fighter.[71]

Mitsubishi announced in June 2013 that it would establish a quality control facility in Illinois for the sourcing of MRJ components from the United States.[72][73]

On 26 April 2017, the fifth MRJ was complete in ANA livery, lacking only engines and nose cone, aircraft number six and seven had their fuselage and wings joined without the tails and the eighth, the first MRJ70, was at the assembly line start; Mitsubishi can manufacture 12 aircraft concurrently: in station one are joined fuselage sections, in station two the landing gear, wings and horizontal stabilisers are attached, in section three the major components are assembled, in outfitting takes place in section four and ground tests in station five, then the completed aircraft moves to painting.[43]

The MRJ90 in All Nippon Airways livery

The MRJ's future was uncertain after six years of delays, with 70% of the backlog shared by two US regional carriers bound by scope clauses: the MRJ90 is too heavy and the smaller MRJ70 accommodates seven seats less than the 76 permitted.[79] Following five postponements, and having lost ten percent of the MRJ's order book following the acquisition of Eastern Air Lines by Swift Air, Mitsubishi Aircraft closed its books at the end of March 2018 with a negative net worth of $979 million.[54]

At the July 2012 Farnborough Airshow, SkyWest agreed to buy 100 MRJ90s, to be delivered between 2017 and 2020. The deal is worth $4.2bn at list prices. During the 2013 Regional Airlines Association conference, held in Montreal, Quebec, Canada, Mitsubishi announced that ANI Group Holdings, which firmed a MoU for 5 MRJ aircraft in June 2011, cancelled the deal, without giving further details.[81]

On 21 May 2017, Iran cancelled its plans to buy Mitsubishi's Regional Jet (MRJ) from the Japanese company. Inability to set a delivery timeline for ordered aircraft and lack of testing were cited as their main reasons.[97]

On 20 July 2016, one of the officials at Iran's ministry of transportation announced Iran is buying 25 ATR airplanes for Iran Aseman Airlines and for further purchases Mitsubishi has shown interest in offering 20 MRJ planes.[102]

On 5 September 2019, US regional carrier Mesa Airlines signed a Memorandum of Understanding for up to 100 SpaceJet M100s, 50 of which are targeted as firm orders and 50 as purchase rights. Deliveries would begin in 2024.[104]

The MRJ behind an Embraer E-Jet 175