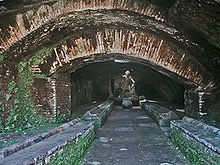 A mithraeum found in the ruins of Ostia Antica, Italy 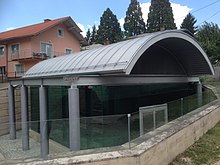 How a modern history theme park imagines a mithraeum: Museum Orientalis in the Netherlands

Finds from a mithraeum in Stockstadt, Germany

A mithraeum found in the German city of Saarbrücken

A Mithraeum (Latin pl. Mithraea), sometimes spelled Mithreum, is a Mithraic temple, erected in classical antiquity by the worshippers of Mithras. Most Mithraea can be dated between 100 B.C. and A.D. 300, mostly in the Roman Empire.

The Mithraeum was either an adapted natural cave or cavern, or a building imitating a cave. When possible, the Mithraeum was constructed within or below an existing building, such as the Mithraeum found beneath Basilica of San Clemente in Rome. While a majority of Mithraea are underground, some feature open holes in the ceiling to allow some light in, perhaps to relate to the connection of the universe and the passing of time. The site of a Mithraeum may also be identified by its singular entrance or vestibule, which stands opposite from an apse-shaped wall in which a pedestal altar at the back stood, often in a recess, and its "cave", called the Spelaeum or Spelunca, with raised benches along the side walls for the ritual meal. Many mithraea that follow this basic plan are scattered over much of the Roman Empire's former territory, particularly where the legions were stationed along the frontiers (such as Britain). Others may be recognized by their characteristic layout, even though converted as crypts beneath Christian churches.

From the structure of the Mithraea it is possible to surmise that worshippers would have gathered for a common meal along the reclining couches lining the walls.

The Mithraeum primarily functioned as an area for initiation, in which the soul descends and exits. The Mithraeum itself was arranged as an "image of the universe". It is noticed by some researchers that this movement, especially in the context of mithraic iconography (see below), seems to stem from the neoplatonic concept that the "running" of the sun from solstice to solstice is a parallel for the movement of the soul through the universe, from pre-existence, into the body, and then beyond the physical body into an afterlife.

Similarly, the Persians call the place a cave where they introduce an initiate to the Mysteries, revealing to him the path by which souls descend and go back again. For Eubulus tells us that Zoroaster was the first to dedicate a natural cave in honour of Mithras, the creator and father of all… this cave bore for him the image of the cosmos which Mithras had created, and the things which the cave contained, by their proportionate arrangement, provided him with symbols of the elements and climates of the cosmos [trans. Arethusa edition][1] 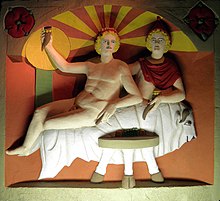 Polychrome reproduction of the Mithraic banquet scene featuring Mithras and the Sun god banqueting on the hide of the slaughtered bull, dating to 130 AD, Lobdengau-Museum, Ladenburg, Germany