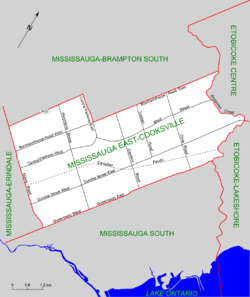 Mississauga East—Cooksville (French: Mississauga-Est—Cooksville) is a federal electoral district in Ontario, Canada, that has been represented in the House of Commons of Canada since 2004.

It consisted of the part of the City of Mississauga east of a line drawn from north to south along the Queensway, Mavis Road, Central Parkway East, HWY 403 and Eglington Avenue East. It includes the neighbourhood of Cooksville, from which the riding derives part of its name.

Riding associations are the local branches of political parties:

This riding has elected the following Member of Parliament: