Minute and second of arc

Advertisement - You can get this game from STEAM
Units for measuring angles
Not to be confused with Milliradian.
This article is about arcsec (unit of angle). For the function, see arcsec (trigonometric function).

A minute of arc, arcminute (arcmin), arc minute, or minute arc, denoted by the symbol

A second of arc, arcsecond (arcsec), or arc second, denoted by the symbol

These units originated in Babylonian astronomy as sexagesimal subdivisions of the degree; they are used in fields that involve very small angles, such as astronomy, optometry, ophthalmology, optics, navigation, land surveying, and marksmanship.

To express even smaller angles, standard SI prefixes can be employed; the milliarcsecond (mas) and microarcsecond (μas), for instance, are commonly used in astronomy.

The fact that the terms "minute" and "second" also denote units of time derives from Babylonian astronomy, where the corresponding time-related terms denoted the duration of the Sun's apparent motion of one minute or one second of arc, respectively, through the ecliptic. In present terms, the Babylonian degree of time was four minutes long, so the "minute" of time was four seconds long and the "second" 1/15 of a second.[4][5]

The prime symbol (′) (U+2032) designates the arcminute,[1][2] though a single quote (') (U+0027) is commonly used where only ASCII characters are permitted. One arcminute is thus written as 1′. It is also abbreviated as arcmin or amin or, less commonly, the prime with a circumflex over it (

Similarly, double prime (″) (U+2033) designates the arcsecond,[1][3] though a double quote (") (U+0022) is commonly used where only ASCII characters are permitted. One arcsecond is thus written as 1″. It is also abbreviated as arcsec or asec.

In celestial navigation, seconds of arc are rarely used in calculations, the preference usually being for degrees, minutes and decimals of a minute, for example, written as 42° 25.32′ or 42° 25.322′.[6][7] This notation has been carried over into marine GPS receivers, which normally display latitude and longitude in the latter format by default.[8]

An arcminute is approximately the resolution of the human eye.

A milliarcsecond is about the size of a dime atop the Eiffel Tower, as seen from New York City.

A microarcsecond is about the size of a period at the end of a sentence in the Apollo mission manuals left on the Moon as seen from Earth.

A nanoarcsecond is about the size of a penny on Neptune's moon Triton as observed from Earth.

Also notable examples of size in arcseconds are: 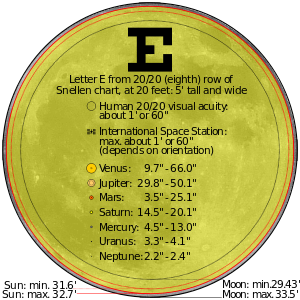 Comparison of angular diameter of the Sun, Moon, planets and the International Space Station. True representation of the sizes is achieved when the image is viewed at a distance of 103 times the width of the "Moon: max." circle. For example, if the "Moon: max." circle is 10 cm wide on a computer display, viewing it from 10.3 m (11.3 yards) away will show true representation of the sizes.

Since antiquity, the arcminute and arcsecond have been used in astronomy: in the ecliptic coordinate system as latitude (β) and longitude (λ); in the horizon system as altitude (Alt) and azimuth (Az); and in the equatorial coordinate system as declination (δ). All are measured in degrees, arcminutes and arcseconds. The principal exception is right ascension (RA) in equatorial coordinates, which is measured in time units of hours, minutes, and seconds.

The arcsecond is also often used to describe small astronomical angles such as the angular diameters of planets (e.g. the angular diameter of Venus which varies between 10″ and 60″), the proper motion of stars, the separation of components of binary star systems, and parallax, the small change of position of a star in the course of a year, or of a solar system body as the Earth rotates. These small angles may also be written in milliarcseconds (mas), or thousandths of an arcsecond. The unit of distance, the parsec, named from the parallax of one arc second, was developed for such parallax measurements. It is the distance at which the mean radius of the Earth's orbit (more precisely, one astronomical unit) would subtend an angle of one arcsecond.

Milky Way’s central region with an angular resolution of 0.2 arcseconds.[13]

Space telescopes are not affected by the Earth's atmosphere but are diffraction limited. For example, the Hubble Space Telescope can reach an angular size of stars down to about 0.1″. Techniques exist for improving seeing on the ground. Adaptive optics, for example, can produce images around 0.05 arcsecond on a 10 m class telescope.

Minutes (′) and seconds (″) of arc are also used in cartography and navigation. At sea level one minute of arc along the equator or a meridian (indeed, any great circle) equals exactly one geographical mile along the Earth's equator or approximately one nautical mile (1,852 metres; 1.151 miles).[15] A second of arc, one sixtieth of this amount, is roughly 30 metres (98 feet). The exact distance varies along meridian arcs because the figure of the Earth is slightly oblate (bulges a third of a percent at the equator).

Positions are traditionally given using degrees, minutes, and seconds of arcs for latitude, the arc north or south of the equator, and for longitude, the arc east or west of the Prime Meridian. Any position on or above the Earth's reference ellipsoid can be precisely given with this method. However, when it is inconvenient to use base-60 for minutes and seconds, positions are frequently expressed as decimal fractional degrees to an equal amount of precision. Degrees given to three decimal places (1/1000 of a degree) have about 1/4 the precision of degrees-minutes-seconds (1/3600 of a degree) and specify locations within about 120 metres (390 feet). For navigational purposes positions are given in degrees and decimal minutes, for instance The Needles lighthouse is at 50º 39.734’N 001º 35.500’W.[16] 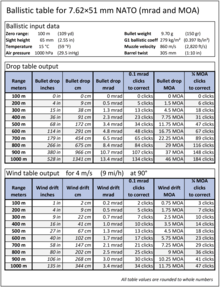 Example ballistic table for a given 7.62×51mm NATO load. Bullet drop and wind drift are shown both in mrad and minute of angle.

The arcminute is commonly found in the firearms industry and literature, particularly concerning the precision[disambiguation needed] of rifles, though the industry refers to it as minute of angle (MOA). It is especially popular as a unit of measurement with shooters familiar with the imperial measurement system because 1 MOA subtends a circle with a diameter of 1.047 inches (which is often rounded to just 1 inch) at 100 yards (2.908 cm at 100 m), a traditional distance on American target ranges. The subtension is linear with the distance, for example, at 500 yards, 1 MOA subtends 5.235 inches, and at 1000 yards 1 MOA subtends 10.47 inches. Since many modern telescopic sights are adjustable in half (1/2), quarter (1/4) or eighth (1/8) MOA increments, also known as clicks, zeroing and adjustments are made by counting 2, 4 and 8 clicks per MOA respectively.

For example, if the point of impact is 3 inches high and 1.5 inches left of the point of aim at 100 yards (which for instance could be measured by using a spotting scope with a calibrated reticle), the scope needs to be adjusted 3 MOA down, and 1.5 MOA right. Such adjustments are trivial when the scope's adjustment dials have a MOA scale printed on them, and even figuring the right number of clicks is relatively easy on scopes that click in fractions of MOA. This makes zeroing and adjustments much easier:

Another common system of measurement in firearm scopes is the milliradian (mrad). Zeroing an mrad based scope is easy for users familiar with base ten systems. The most common adjustment value in mrad based scopes is 1/10 mrad (which approximates ​1⁄3 MOA).

One thing to be aware of is that some MOA scopes, including some higher-end models,[citation needed] are calibrated such that an adjustment of 1 MOA on the scope knobs corresponds to exactly 1 inch of impact adjustment on a target at 100 yards, rather than the mathematically correct 1.047". This is commonly known as the Shooter's MOA (SMOA) or Inches Per Hundred Yards (IPHY). While the difference between one true MOA and one SMOA is less than half of an inch even at 1000 yards,[17] this error compounds significantly on longer range shots that may require adjustment upwards of 20–30 MOA to compensate for the bullet drop. If a shot requires an adjustment of 20 MOA or more, the difference between true MOA and SMOA will add up to 1 inch or more. In competitive target shooting, this might mean the difference between a hit and a miss.

Sometimes, a precision-oriented firearm's performance will be measured in MOA. This simply means that under ideal conditions (i.e. no wind, high-grade ammo, clean barrel, and a stable mounting platform such as a vise or a benchrest used to eliminate shooter error), the gun is capable of producing a group of shots whose center points (center-to-center) fit into a circle, the average diameter of circles in several groups can be subtended by that amount of arc. For example, a 1 MOA rifle should be capable, under ideal conditions, of repeatably shooting 1-inch groups at 100 yards. Most higher-end rifles are warrantied by their manufacturer to shoot under a given MOA threshold (typically 1 MOA or better) with specific ammunition and no error on the shooter's part. For example, Remington's M24 Sniper Weapon System is required to shoot 0.8 MOA or better, or be rejected from sale by quality control.

Rifle manufacturers and gun magazines often refer to this capability as sub-MOA, meaning a gun consistently shooting groups under 1 MOA. This means that a single group of 3 to 5 shots at 100 yards, or the average of several groups, will measure less than 1 MOA between the two furthest shots in the group, i.e. all shots fall within 1 MOA. If larger samples are taken (i.e., more shots per group) then group size typically increases, however this will ultimately average out. If a rifle was truly a 1 MOA rifle, it would be just as likely that two consecutive shots land exactly on top of each other as that they land 1 MOA apart. For 5-shot groups, based on 95% confidence, a rifle that normally shoots 1 MOA can be expected to shoot groups between 0.58 MOA and 1.47 MOA, although the majority of these groups will be under 1 MOA. What this means in practice is if a rifle that shoots 1-inch groups on average at 100 yards shoots a group measuring 0.7 inches followed by a group that is 1.3 inches, this is not statistically abnormal.[18][19]

The Metric System counterpart of the MOA is the milliradian or mrad, being equal to one 1000th of the target range, laid out on a circle that has the observer as centre and the target range as radius. The number of milliradians on a full such circle therefore always is equal to 2 × π × 1000, regardless the target range. Therefore, 1 MOA ≈ 0.2909 mrad. This means that an object which spans 1 mrad on the reticle is at a range that is in metres equal to the object's size in millimetres[dubious – discuss] (e.g. an object of 100 mm @ 1 mrad is 100 metres away). So there is no conversion factor required, contrary to the MOA system. A reticle with markings (hashes or dots) spaced with a one mrad apart (or a fraction of a mrad) are collectively called a mrad reticle. If the markings are round they are called mil-dots.

In the table below conversions from mrad to metric values are exact (e.g. 0.1 mrad equals exactly 10 mm at 100 metres), while conversions of minutes of arc to both metric and imperial values are approximate.

Comparison of milliradian (mrad) and minute of arc (MOA).

In humans, 20/20 vision is the ability to resolve a spatial pattern separated by a visual angle of one minute of arc. A 20/20 letter subtends 5 minutes of arc total.

The deviation from parallelism between two surfaces, for instance in optical engineering, is usually measured in arcminutes or arcseconds. In addition, arcseconds are sometimes used in rocking curve (ω-scan) x ray diffraction measurements of high-quality epitaxial thin films.

Some measurement devices make use of arcminutes and arcseconds to measure angles when the object being measured is too small for direct visual inspection. For instance, a toolmaker's optical comparator will often include an option to measure in "minutes and seconds".