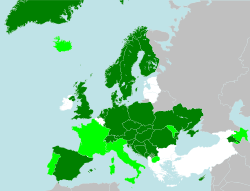 For the purposes of the European Charter for Regional or Minority Languages:

"regional or minority languages" means languages that are:

In most European countries, the minority languages are defined by legislation or constitutional documents and afforded some form of official support. In 1992, the Council of Europe adopted the European Charter for Regional or Minority Languages to protect and promote historical regional and minority languages in Europe.[3]

The signatories that have not yet ratified it as of 2012 are Azerbaijan, France, Iceland, Ireland, Italy, Macedonia, Malta, Moldova, and Russia.

In Canada the term "minority language" is used in the Constitution of Canada, in the heading above section 23 of the Canadian Charter of Rights and Freedoms, which guarantees educational rights to official language minority communities. In Canada, the term "minority language" is generally understood to mean whichever of the official languages is less spoken in a particular province or territory (i.e., English in Québec, French elsewhere).

Minority languages may be marginalised within nations for a number of reasons. These include having a relatively small number of speakers, a decline in the number of speakers, and popular belief that these speakers are uncultured, or primitive, or the minority language is a dialect of the dominant language. Support for minority languages is sometimes viewed as supporting separatism, for example, the ongoing revival of the Celtic languages in the British Isles (Irish, Welsh, Scottish Gaelic, Manx, Cornish and Breton). The dominant culture may consider use of immigrant minority languages to be a threat to unity, indicating that such communities are not integrating into the larger culture.[citation needed] Both of these perceived threats are based on the notion of the exclusion of the majority language speakers. Often this is added to by political systems by not providing support (such as education and policing) in these languages.

Views differ as to whether the protection of official languages by a state representing the majority speakers violates the human rights of minority speakers. In March 2013, Rita Izsák, UN Independent Expert on minority issues, said that "protection of linguistic minority rights is a human rights obligation and an essential component of good governance, efforts to prevent tensions and conflict, and the construction of equal and politically and socially stable societies".[5]

In Slovakia for example, the Hungarian community generally considers the 'language law' enacted in 1995 to be discriminatory and inconsistent with the European Charter for the Protection of Regional or Minority languages. The Majority Slovaks believed that minority speakers' rights are guaranteed, in accordance with the highest European standards, and are not discriminated against by the state language having preferential status. The language law declares that "the Slovak language enjoys a preferential status over other languages spoken on the territory of the Slovak Republic." As a result of a 2009 amendment, a fine of up to €5,000 may be imposed for a misdemeanor from the regulations protecting the preferential status of the state language, e.g. if the name of a shop or a business is indicated on a sign-board first in the minority language and only after it in Slovak, or if in a bilingual text, the minority language part is written with bigger fonts than its Slovak equivalent, or if the bilingual text on a monument is translated from the minority language to the dominant language and not vice versa, or if a civil servant or doctor communicates with a minority speaker citizen in a minority language in a local community where the proportion of the minority speakers is less than 20%.[citation needed]

Sign languages are often not recognized as true natural languages, although extensive research supports the case that they are independent languages.

Speakers of auxiliary languages have also struggled for their recognition. They are used primarily as second languages and have few native speakers.

Languages lacking recognition in some countries

These are languages that have the status of a national language and are spoken by the majority population in at least one country, but lack recognition in other countries, even where there is a significant minority linguistic community:

Significant languages having no majority of speakers in any country

Linguistic communities that form no majority of population in any country, but whose language has the status of an official language in at least one country:

Languages with no official status

A treasure language is one of the thousands of small languages still spoken in the world today. The term was proposed by the Rama people of Nicaragua as an alternative to heritage language, indigenous language, and "ethnic language", names that are considered pejorative in the local context.[8] The term is now also used in the context of public storytelling events.[9]

The term "treasure language" references the desire of speakers to sustain the use of their mother tongue into the future:

[The] notion of treasure fit the idea of something that had been buried and almost lost, but was being rediscovered and now shown and shared. And the word treasure also evoked the notion of something belonging exclusively to the Rama people, who now attributed it real value and had become eager and proud of being able to show it to others.[8]

Accordingly, the term is distinct from endangered language for which objective criteria are available, or heritage language which describes an end-state for a language where individuals are more fluent in a dominant language.[10]