Ministry of the Interior (Italy)

The Ministry of the Interior (Italian: Ministero dell'Interno) is a government agency of Italy, headquartered in Rome.[1] It is cabinet-level ministry of the Italian Republic. As of September 2019, Luciana Lamorgese, former Prefect of Milan and Member of the Council of State (Italy), is the minister.

The ministry is responsible for internal security and the protection of the constitutional order, for civil protection against disasters and terrorism, for displaced persons and administrative questions. It is host to the Standing Committee of Interior Ministers and also drafts all passport, identity card, firearms, and explosives legislation.

The Ministry of the Interior is political authority for the administration of internal affairs. It controls the State Police (Polizia di Stato) , the Fire Fighters Department (Vigili del Fuoco) and the Prefect The minister herefore sits on the High Council of Defence.

The main functions of the ministry are declared in the Executive Order No. 300, promulgated on the 30th of July 1999[2] and are as follows:

The following departments, directorates, special commissions, and other offices and secretariats of the Ministry of Interior are as follows:

Offices for the Direction of Collaboration

Palazzo delle Segreterie, in Turin; first seat of the Ministry of the Interior of the Italian State (until 1865) and now the headquarters of the Prefecture

Palazzo Medici Riccardi, in Florence, seat of the Ministry from 1865 to 1871; now seat of the provincial government

The Ministry was reorganised in 1870 by Minister Giovanni Lanza and again in 1874 and 1877, under the first government of the left-wing of the Liberal Party. During these years, the Ministry acquired control of the police (separate from the judicial police), prisons, and social policing (meaning offices of public health). Towards the end of the 19th century, Minister Francesco Crispi strengthened the ministry and the prefectures. Subsequently, Minister Antonio di Rudinì decentralised some functions, entrusting various roles to the prefectures which had previously been the responsibility of the Ministry itself.

Under Giovanni Giolitti, in the early twentieth century, the Ministry became the key means of state action. It exercised watchful and strict control over the comuni and provinces, especially in matters of public order. In the arena of public health, it enforced a rationalisation of health laws in 1913, with the so-called "Sanitary Codex". In the social sphere, the prefectures were called upon to mediate in labour conflicts and improve working conditions, in collaboration with the government labour office, and to "municipalise" essential services like tramlines, streetlighting, kindergartens, etc. In this area too, their powers and administrative role expanded.

Although the Ministry continued its ordinary role in maintaining security, order and health during the First World War, its overall structure was not significantly modified. With the rise of Italian Fascism, there was little change. An exception is Law no.1601 of 3 December 1922, which transferred the General Directorate of Prisons and Rehabilitation to the Ministry of Mercy, Justice, and Worship. In general, Benito Mussolini controlled the ministry personally, but it progressively lost its guiding role in the administration of the state. 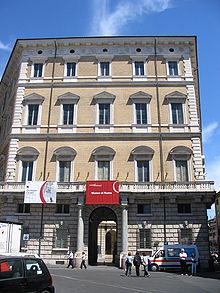 Palazzo Braschi in Rome, seat of the Ministry of the Interior from 1871 to 1925, now the site of a museum.

After the fall of Fascism, institutional changes resulted from the creation of the Republic of Italy. The main theme of these changes was the increased decentralisation of power to the Regions and the progressive transfer of competencies from the Ministry of the Interior to them over the course of the 1960s.

The main role of the Ministry also changed, or rather reverted to the role it had had under Giolitti decades earlier. Its role in social protection was reinforced and, along with the Ministry of Labour it played a key role in welfare politics, providing support to the socially disadvantaged and guaranteeing protection in the event of disaster.

There was also a reorganisation of the centralised structure of the Ministry and the number of General Directorates declined from even to five. Moreover, with Law no. 121/1981, the Polizia di Stato was reformed and transformed from the General Directorate of Public Security into a Department. This anticipated the future departmental structure of the ministry as a whole.

In the 1990s, the Bassanini Reforms [it] involved a complex process of reorganisation of the administrative structure of the Ministry. In particular, Decree Law no.300/1999 dealt with the creation of a departmental structure for the Ministry. Additionally, the prefecture system was overhauled and they were renamed "Government Territorial Prefecture Offices." Since the completion of these reforms, the Ministry has had authority over "general" administration, including relationships between centre and periphery, and particularly for the protection of fundamental functions and the security of citizens. 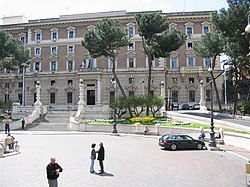 The Ministry of the Interior has been based in Rome at the Palazzo del Viminale since 1925. Before that, the Ministry, as well as the office of the Prime Minister, were based at the Palazzo Braschi. The Viminale was commissioned in 1911 by Giovanni Giolitti. The architect was Manfredo Manfredi, who was instructed to design a fitting structure for a government headquarters. The Viminale was officially inaugurated on 9 July 1925. The building has five stories and hundreds of rooms linked by a series of hallways. Notable aspects include the imposing triple arched entrance of the Palazzo della Presidenza, the staircase of honour of the Palazzo degli Uffici, the chamber of the Council of Ministers, and entrance to the stairway leading to the piano nobile, with wooden, marble, and stucco decoration.

In 1961, the headquarters of the Office of Prime Minister was separated from the Ministry of the Interior and transferred to Palazzo Chigi, where it remains today.