Milton is a federal electoral district in Ontario, Canada, that consists of the town of Milton and part of Burlington which has a population growing much faster than the Ontario average. It was created by the 2012 federal redistribution and previously part of Halton. Redistributed results showed that Conservative Lisa Raitt won the area easily in 2011, although her vote share dropped in the 2015 election and the Liberals took the riding in 2019. Since 2019 it has been represented by Liberal Adam van Koeverden. 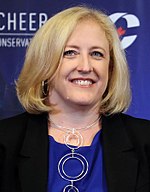 The district was first proposed as part of the 2012 redistribution. It was initially proposed to consist of Milton, the rural northern part of Burlington, and some small suburban areas of Burlington.[6] There was some concern that the growth of Milton would cause it to be seriously underrepresented by 2031.[7] Before the public meetings were scheduled to be held, the commission redrew the districts in the area and the district would now be split. Burlington North—Milton South would consist of southern Milton and a few more suburban neighbourhoods in Burlington. In the north, it would be combined with Halton Hills to form Halton Hills—Milton.[8]

In February 2013, the district was reverted back to the original proposal, but with the northern suburbs of Burlington excluded.[9] This proposal ended up being approved.[10] The area of this district was previously part of Halton and had a population of 88,065, 17% below the provincial average.[9][11][12]

In the 2011 election, Conservative MP Lisa Raitt won Halton by about 29% of the vote, and when redistributed, she won Milton by 31%.[13][14] In the 2015 election, her margin of victory over the Liberal candidate declined to 5%.[15] Shortly after the election, Raitt was appointed to the Shadow Cabinet as Finance critic.[16] After Raitt spent time outside of the shadow cabinet during her leadership bid, she was appointed Deputy Leader of the Conservative Party in 2017.[17][18]

In January 2019, the Liberals nominated former Olympian Adam van Koeverden to run in the riding.[19] A riding poll was released in the lead-up to the election showing a tight race, and it was expected that it would turn out that way on election night.[20] Despite this, van Koeverden won the riding's seat in Parliament against Raitt by 15% of the vote and won a majority of votes in the riding.[21]

This riding has elected the following Members of Parliament: