Military operations other than war 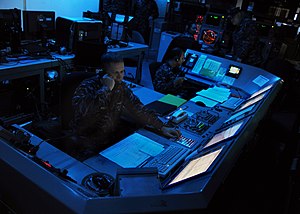 Military operations other than war (MOOTW) focus on deterring war, resolving conflict, promoting peace, and supporting civil authorities in response to domestic crises. The phrase and acronym were coined by the United States military during the 1990s, but it has since fallen out of use. The UK military has crafted an equivalent or alternate term, peace support operations (PSO). Both MOOTW and PSO encompass peacekeeping, peacemaking, peace enforcement and peace building.[1]

MOOTW not involving the use or threat of force include humanitarian assistance and disaster relief. Special agreements exist which facilitate fire support operations within NATO and the ABCA quadripartite working group, which includes American, British, Canadian and Australian military contingents. Cooperation is organized in advance with NATO standardisation agreements (STANAGs) and quadripartite standardisation agreements (QSTAGs). Many countries which need disaster support relief have no bilateral agreements already in place; and action may be required, based on the situation, to establish such agreements.[2]

Peacetime and conflict represent two states of the range of military operations.

Planners are challenged to find ways to resolve or work around unique arrays of inter-related constraints, e.g., issues related to budgeting, training and force structure. The uncertainties which are inherent or implied include the varying political aspects which are likely to affect unanticipated MOOTW.[4]

The Australian Defence Forces has turned attention to the study and understanding of a changing geo-strategic environment. MOOTW becomes more important where the options for traditional application of military instruments are growing more limited.[5]

The non-traditional missions of the Chinese armed forces have evolved as an increasingly used tool of statecraft.[9]

The military in Japan is affected by Japan's pacifist post-war constitution. This affects classification of the Hyūga class helicopter carriers, which are ships of the Japan Maritime Self-Defense Force (JMSDF). The missions of these ships are limited to "military operations other than war."[13]

The prescience of Sir Julian Corbett (1854–1922) and his strategic point of view are reflected in contemporary applications of MOOTW, which extend and reinvigorate Corbettian formulations.[15]

The evolution of British tactics in the Malayan Emergency (1948–1960) illustrates lessons learned the hard way. The British developed a strategy with elements similar to "military operations other than warfare." Lieutenant General Sir Harold Briggs proposed "two key goals to accomplish in order to end the insurgency--first, to protect the population, and second to isolate them from the guerrillas."[16]

British peacekeeping troops in Bosnia in the late 1990s attended to similar objectives in a process of re-establishing "normalcy."[17]

Main article: Military operations other than war (US)

In United States military doctrine, military operations other than war include the use of military capabilities across a range of operations that fall short of war. Because of political considerations, MOOTW operations normally have more restrictive rules of engagement (ROE) than in war.

Although the MOOTW acronym is new,[when?] the concepts are not. The RAND database identifies 846 military operations other than war between 1916 and 1996 in which the US Air Force or its predecessors played a noteworthy role.[18]

The Singapore Armed Forces (SAF) anticipates a continuing need for conventional military competence into the foreseeable future, but missions in which the use of minimal[clarification needed] force is the rule rather than the exception are expected to grow in importance. Proficiency in MOOTW requires a much greater and somewhat different set of skill sets than traditional war-fighting. In this context, the SAF is developing new training programmes for small unit leaders. The process of educating and preparing a professional SAF capable of handling a wide spectrum of operations anticipates an increase in MOOTW. [20] These men will need to ready to become "peacekeepers, goodwill ambassadors and winners of hearts and minds."[21]

In 1999, the Singapore contingent of UN peacekeepers in East Timor was the most extensive MOOTW mission attempted by the SAF. The commitment included three landing ship tanks (LSTs), medical teams, C-130s, military observers and logistics support.[22]

The Indian army is tasked with many operations other than war such as Operation Sadbhavana (Goodwill) in Jammu and Kashmir and Operation Samaritan in north-east India. Operation Sadbhavana aims to limit the alienation faced by the population and infrastructure destruction in Jammu and Kashmir in areas where the government administration has not been successful due to insurgency. Welfare initiatives include Army Goodwill Schools, educational and motivational tours, health camps, women and youth empowerment and infrastructure development.[23][24]