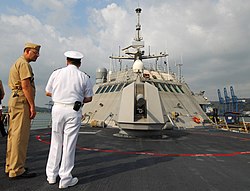 The Chilean defense attaché in Panama, at left, receiving a briefing on the armament of the USS Freedom from the ship's executive officer in 2010

A military attaché is a military expert who is attached to a diplomatic mission, often an embassy. This post is normally filled by a high-ranking military officer who retains his commission while serving in an embassy. Opportunities sometimes arise for service in the field with military forces of another sovereign state.

An early example was General Edward Stopford Claremont, the first British military attaché (at first described as "military commissioner"), who served in Paris for 25 years from 1856 to 1881. Though based in the embassy, he was attached to the French army command during the Crimean War and later campaigns.

The functions of a military attaché are illustrated by the American military attachés in Japan around the time of the Russo-Japanese war of 1904–1905. A series of military officers had been assigned to the American diplomatic mission in Tokyo since 1901, when the U.S. and Japan were co-operating closely in response to the Boxer Rebellion in China. The military attaché advised the United States Ambassador to Japan on military matters, acted as a liaison between United States Army and the Imperial General Headquarters, and gathered and disseminated intelligence. The military attaché's office in Tokyo usually had two assistants and a number of "language officers" who were assigned specifically to learn Japanese while attached to Imperial Japanese Army regiments as observers. These "language officers" translated training and technical manuals and reported on conditions in Japanese military units.[1]

During the Russo-Japanese War (1904–1905), military attachés from many Western military organizations served as observers with the land and naval forces of Russia and of Japan. The United States Army detailed eight officers to serve as military attachés with opposing forces in the field; and all served from the start of hostilities in 1904 through the signing of the peace protocols in September 1905.[2] After the war, the reports of British officers attached to the Japanese forces in the field were combined and published in four volumes.[3] During this conflict, some attachés served primarily in Manchuria, and others served primarily in Tokyo. Some, like Italian naval officer Ernesto Burzagli, saw service both at sea and in Tokyo.

The agreed conditions that allow military attachés to gather information can be misunderstood with fatal results. United States military attaché Maj. Arthur D. Nicholson was killed March 24, 1985, while photographing a military installation in East Germany 160 kilometres (100 mi) northwest of Berlin. He was reportedly observing from a point not marked off-limits,[citation needed] though near a place that was. According to Sgt. Jessie Schatz, Nicholson's driver, there were no warning shots and the Soviets refused to give Nicholson medical attention for nearly an hour. This activity had been agreed to by the United States and the Soviet Union. Such agreements stemmed from negotiations between United States and Soviet commanders in Germany back in 1947. Soviet liaison teams were conducting similar missions in West Germany. These tours had evolved into a legalized form of intelligence-gathering, usually accepted by both sides. The killing became a diplomatic incident. In retaliation, the United States expelled Soviet military attaché Stanislav Gromov. Mr. Gromov was apparently selected[by whom?] for his effectiveness in collecting intelligence on the United States for the Soviet Union from his post in Washington.[4][5]