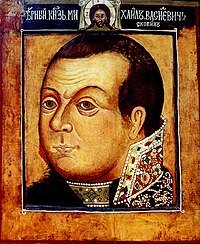 Prince Mikhail Vasiliyevich Skopin-Shuisky (Russian: Михаил Васильевич Скопин-Шуйский) (8 November OS (18 November NS) 1586 – 23 April OS (3 May NS) 1610) was a Russian statesman and military figure during the Time of Troubles. He was the last representative of a cadet branch of the Shuysky family.

Having lost his father, Vasili Feodorovich Skopin-Shuisky, at an early age, Mikhail Skopin-Shuisky was educated by his mother. During the reign (1598-1605) of Boris Godunov, he was appointed stolnik (tsar's assistant). False Dmitriy I made Mikhail his mechnik (sword carrier), and asked him personally to bring Marfa Ivanovna - mother of the future Tsar Mikhail I - to Moscow from exile. During the reign (1606-1610) of Tsar Vasili IV, Skopin-Shuisky became a close associate of his cousin, the Tsar.[citation needed]

He began his military career in 1606 with the appearance of Ivan Bolotnikov, whom he would defeat twice, first near the Pakhra River with a small unit at his disposal (after Bolotnikov had crushed the Muscovite army led by Mstislavsky and other boyars) and then at Kotly. After the second defeat, Bolotnikov and his men fled to Tula. Skopin-Shuisky took an active part in a successful siege of Tula alongside the Muscovite army.[citation needed]

When False Dmitriy II appeared on the political horizon, Vasili IV decided to seek help from the Swedes and sent Skopin-Shuisky to Novgorod to negotiate with them. Despite some obstacles, Skopin-Shuisky managed to persuade the Swedes to help the Russian tsar.[citation needed]

On 14 April 1609, Skopin-Shuisky left Novgorod with 12,000 Swedish soldiers under the command of Jacob De la Gardie to save the Russian throne. Skopin-Shuisky captured Oreshek, Tver and Torzhok and cleared the north of the country from the enemies. He defeated Hetman Jan Piotrus Sapieha at Kalyazin and made him abandon the Siege of the Troitse-Sergiyeva Lavra.[citation needed]

Mikhail's actions were often impeded by lack of funding for the Swedish mercenaries and necessity to train his own army. Nevertheless, many supporters of False Dmitriy II chose to flee at the sight of Mikhail's army and this gained him a reputation of the saviour of the fatherland. At one point, Prokopy Lyapunov's companions came to Mikhail Skopin-Shuisky and offered him the Russian throne, but he declined the offer.[citation needed]

All of this made his cousin Dmitry Ivanovich Shuisky, who previously had to surrender his post of the commander of the Muscovite army in favour of Mikhail, envious. It appears that the tsar decided to get rid of his 23-year-old rival. During a celebration, Dmitriy Shuisky's wife poisoned her husband's food. He died on 23 April 1610 two weeks later. Vasili IV ordered to bury him in the Cathedral of the Archangel Michael, but away from other royal crypts.[citation needed]