The French Congo (French: Congo français) or Middle Congo (French: Moyen-Congo) was a French colony which at one time comprised the present-day area of the Republic of the Congo and parts of Gabon, and the Central African Republic. In 1910, it was made part of the larger French Equatorial Africa.

Modern Republic of Congo is considered French Congo's successor state, having virtually identical borders, and having inherited rights to sovereignty and independence from France through the dissolution of French Equatorial Africa in the late 1950s.

The French Congo began at Brazzaville on 10 September 1880 as a protectorate over the Bateke people along the north bank of the Congo River,[1] was formally established as the French Congo on 30 November 1882,[1] and was confirmed at the Berlin Conference of 1884–85. Its borders with Cabinda, Cameroons, and the Congo Free State were established by treaties over the next decade. The plan to develop the colony was to grant massive concessions to some thirty French companies. These were granted huge swaths of land on the promise they would be developed. This development was limited and amounted mostly to the extraction of ivory, rubber, and timber. These operations often involved great brutality and the near enslavement of the locals.

Even with these measures most of the companies lost money. Only about ten earned profits. Many of the companies' vast holdings existed only on paper with virtually no presence on the ground in Africa.

The French Congo was sometimes known as Gabon-Congo.[2] It formally added Gabon on in 1891,[1] was officially renamed Middle Congo (French: Moyen-Congo) in 1903, was temporarily divorced from Gabon in 1906, and was then reunited as French Equatorial Africa in 1910 in an attempt to emulate the relative success of French West Africa.

A 1906 study L'Expansion coloniale au Congo français, 'The colonial expansion of French Congo', was published in conjunction with the French Colonial Exposition in Marseille.[3] In 1925 African-American historian, sociologist, and Pan-Africanist W. E. B. Du Bois wrote "'Batouala' voices it. In the depths of the French Congo one finds the same exploitation of black folk as in the Belgian Congo or British West Africa."[4][5] 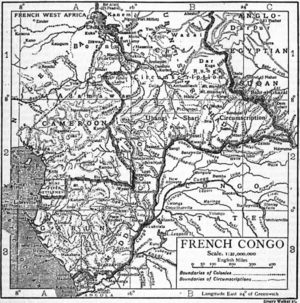 The colony was administered under four commissioners-general (commissionaires généraux) prior to its reorganization into Middle Congo.[1]