Michael Holcombe Wilson PC CC (November 4, 1937 – February 10, 2019) was a Canadian businessman, politician and diplomat. He was the Chairman of Barclays Capital Canada Inc. from May 2010 until his death in February of 2019.[1] He was a Bay Street investment executive when he was elected to the House of Commons of Canada as a Progressive Conservative Member of Parliament in the 1979 general election. He served in various portfolios in the governments of Joe Clark and Brian Mulroney between 1979 and 1993. He was the Canadian Ambassador to the United States from 2006 until 2009, when he was succeeded by Gary Doer.

Born in Toronto, Ontario, Wilson was the son of Constance L. (Davies) and Harry Holcombe Wilson.[2] Wilson attended Upper Canada College and then Trinity College at the University of Toronto, where he joined the Kappa Alpha Society.

Wilson was a candidate at the 1983 Progressive Conservative leadership convention. He tried to woo young delegates by having the rock group Spoons perform on his behalf. He dropped off after the first ballot and urged his supporters to vote for Brian Mulroney, the eventual winner. Mulroney appointed Wilson as Minister of Finance when the party formed a government after the 1984 election.

Wilson reformed the tax system to broaden the tax base and lower tax rates, removing many special tax provisions, and helped negotiate the Canada–United States Free Trade Agreement. He also announced the Goods and Services Tax in his 1989 budget, a tax introduced in 1990 which is still in place today and is considered a necessary source of federal income, despite being unpopular with consumers.[3]

In 1991, after seven years as Minister of Finance, Wilson became Minister of Industry, Science and Technology and Minister of International Trade. In that role, he participated in negotiating the North American Free Trade Agreement.

Wilson was not a candidate in the 1993 election, and he returned to Bay Street to head his own consulting and financial services firm. He later rejoined Royal Bank of Canada, and he was Chairman and CEO of RT Capital when that business was sold to UBS AG. Wilson served as Chairman of UBS Canada from 2001 to 2006.

In recent years, he was a spokesman for a lobby group promoting public–private partnerships, and he was the Chairman of the Canadian Coalition for Good Governance. From 2003 to 2007, Wilson served as the Chancellor of Trinity College. In July 2012, he became the Chancellor of the University of Toronto, and he was re-elected to an additional three-year term in 2015.[4]

Wilson was a mental health advocate, having lost a son to depression and suicide.[5] Wilson established the Cameron Parker Holcombe Wilson Chair in Depression Studies at the University of Toronto. He also sat on the board of directors for the Mental Health Commission of Canada.

On 9 April 2015, it was announced that Wilson was appointed as the new board chair of the Mental Health Commission of Canada.[7] He was also a member of the Trilateral Commission.[8]

Ambassador to the United States 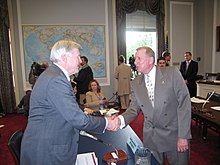 In March 2008, it was alleged that Wilson told the Canadian media that U.S. presidential candidate Barack Obama was not serious about his promise to opt out of the North American Free Trade Agreement (NAFTA). Liberal MP Navdeep Bains called on Wilson to step down as Canada's ambassador to Washington while the alleged leaks were investigated. Wilson publicly acknowledged that he spoke to then-CTV reporter Tom Clark, who first reported the leaks, before the story aired, but he refused to discuss what was said.[9][10]

Wilson was married to Margie Wilson and was predeceased by son Cameron, who suffered from depression and died by suicide in 1995.[11] Following his son's death, Wilson devoted considerable time to advocate for mental health. The couple had two other children: son Geoff Wilson and daughter Lara O'Brien, both of whom married and have children.[12] Wilson died from cancer on February 10, 2019.[13]

There is a Michael Wilson fonds at Library and Archives Canada[14].