Michael David Chong PC MP (born November 22, 1971) is a Canadian politician. He has represented the riding of Wellington—Halton Hills in the House of Commons of Canada since 2004. He served in the cabinet of Prime Minister Stephen Harper as Minister of Intergovernmental Affairs and Minister of Sport, as well as the President of the Queen's Privy Council for Canada from February 6, 2006, to November 27, 2006. Chong is a member of the Conservative Party of Canada, and was a candidate for its leadership election in 2017.[2]

Michael Chong was born on November 22, 1971, in Windsor, Ontario, and grew up in Fergus, a small town in rural Southern Ontario. He is the oldest son of Paul Chong and Cornelia de Haan. His father was born in Hong Kong and immigrated to Canada in 1952 and became a doctor. His mother arrived in Canada in 1960 from the Netherlands and worked as a nurse. Chong has three siblings; Peter, Andrew and Joanna.[3] He was raised near Fergus in Wellington County, and attended Centre Wellington District High School.[4] In 1978, when Chong was six years old his mother was killed in a car accident at an intersection near Fergus. Two years after her death his father married Adriana, who raised him and his three siblings as if they were her own. In 1999, Chong's father was also killed in a car accident at the same intersection where his mother had been killed 21 years earlier.[5]

Chong attended Trinity College at the University of Toronto where he studied philosophy, history and politics.[3] In his final year at university he landed a job with Canadian Tire as an assistant to a senior executive.[5] He has worked in information technology for Barclays Bank and Research Capital Corporation. Chong worked as a senior technology consultant to the Greater Toronto Airports Authority for the redevelopment of Pearson International Airport and prior to entering politics he worked for the National Hockey League Players’ Association.[3]

Chong is married to Carrie Davidson, whom he met while at university. She has roots in both Quebec and Newfoundland and Labrador. Her great-great grandfather was William Whiteway, a pro-Confederation politician and three-time premier of the colony of Newfoundland in the late 19th century. Another great-great grandfather, Charles Peers Davidson, was chief justice of the Superior Court of Quebec in the early 1910s. The couple live on a 100-acre farm in Fergus, located on the Grand River about 85 kilometres from Toronto, and have three sons; William, Alistair, and Cameron.[3]

In early 2004, the Progressive Conservatives merged with the Canadian Alliance to create the Conservative Party of Canada. Chong joined the new party, and in March 2004 defeated Marty Burke to win its nomination for Wellington—Halton Hills.[10] He was elected in the 2004 federal election, defeating Liberal Bruce Hood by over 2,000 votes.

Chong is primarily known as a fiscal conservative and is considered a moderate in his party. He declared his personal support for the Kyoto Protocol during the 2004 federal election, despite his party's opposition to the measure.[11] He supported Elizabeth Witmer's bid to lead the Progressive Conservative Party of Ontario in 2001–02, and supported John Tory for the same position in 2004.[12]

Chong wrote an opinion editorial for The Globe and Mail newspaper in late 2004 entitled "Canadians without hyphens", criticizing John Barber's suggestion that there were not enough Chinese-Canadian MPs representing areas with large Chinese populations. Chong noted he was elected in a riding with a 97% caucasian population, while John McCallum was elected in Markham—Unionville, which is more than 60% Asian. Chong argued that these results reflected his idea of Canada, adding that he favoured the creation of a "common Canadian identity that will allow for greater understanding among ethnic groups".[13]

Like most Conservative MPs, Chong voted against the legal recognition of same-sex marriage in Canada in 2005. A majority of MPs from other parties supported the measure, however, and same-sex marriages were granted legal recognition. In December 2006, Chong reversed his previous position and became one of thirteen Conservative MPs to vote against re-opening the marriage debate.[14]

Chong has opposed using the Great Lakes as a water source for inland communities. He has expressed concern about depopulation in rural Ontario, and supports continued door-to-door rural mail service programs.[15]

Minister of Intergovernmental Affairs and Sport

Chong was re-elected in the 2006 federal election. In February 2006, he was appointed to the cabinet in Stephen Harper's government as Minister of Intergovernmental Affairs, President of the Queen's Privy Council for Canada, and Minister of Sport. He was the second Chinese-Canadian cabinet minister in Canadian history, after Raymond Chan.

In the buildup to the 2006 federal budget, Chong met with various provincial representatives to discuss ways of approaching Canada's equalization formula between the federal government and the provinces. Prior to the budget's release, he described the existing system as "a mess".[16] Some politicians in Ontario expressed concern that the deal would be unduly favourable to Quebec and unfavourable to their province.[17] Later in the year, Harper government indicated that it would automatically transfer future surpluses to the provinces.[18]

In September 2006, the Canadian media reported that the Harper government was considering a plan to transfer $3 billion to the provinces each year. Every province except Newfoundland and Labrador would gain revenue, with Quebec gaining the most at $1.1 billion.[19]

In early 2006, Chong said that his government would fulfill an election pledge to devote 1% of federal health spending (about $350 million) to health promotion and amateur sports.[20] He represented the Harper government as a representative at the 2006 Commonwealth Games in Melbourne, Australia.[21] This funding did not appear in the 2006 budget, although the Harper government introduced an annual sports tax credit of $80 per child.[22]

In June 2006, Chong indicated that the federal government would not provide federal funding to the "Out Games", a gay-and-lesbian themed athletic competition held in Montreal, Quebec.[23] The following month, Chong provided $395,000 to Canada's Sports Hall of Fame, to make its collection accessible online.[24] He has also discussed the possibility of restarting Canada's ParticipACTION program, which encourages ordinary citizens to become more involved in sports and athletic events.[25] The program was restarted in February 2007, after Chong resigned from cabinet.[26]

Chong pledged $3.5 million to the 2008 North American Indigenous Games in early November 2006.[27] Later in the same month, he announced the creation of Podium Canada to consolidate Canada's medal strategies for the Summer and Winter Olympics.[28]

Chong unexpectedly resigned from cabinet on November 27, 2006, to express his opposition to a motion before the House of Commons, put forward by Prime Minister Harper, which recognized "the Québécois as a nation within a united Canada". Chong said that the motion was akin to ethnic nationalism, which he opposes. During the press conference he held to announce his decision, he said "I believe in one nation, undivided, called Canada".[29]

As a backbench MP, Chong proposed the Reform Act (An Act to amend the Canada Elections Act and the Parliament of Canada Act (candidacy and caucus reforms)) in order to increase the power of party caucuses. The Act ultimately passed the House of Commons and Senate, with amendments, and was given royal assent in 2015. Under the act, each caucus votes at the beginning of each parliament on whether or not it will adopt the Act's procedures giving the caucus the power to review and, if it wishes, remove the party leader, for the election and review of the caucus chair, the expulsion and re-admission of caucus members, and the election of the interim leader.[30] 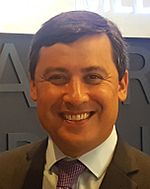 The Conservative Party was defeated in the 2015 federal election, and Harper immediately resigned as party leader. Despite not having served in Harper's cabinet for nine years, Chong's name was among those mentioned in the media as a potential candidate for party leader. When asked about a leadership bid in November 2015, Chong responded "let's wait and see."[31] In early 2016, the Conservative Party announced that the leadership election would be held on May 27, 2017. On May 16, 2016, Chong launched his campaign at the National Press Theatre in Ottawa, becoming the third candidate to enter the race.[2]

Chong is in favour of implementing what he describes as a revenue-neutral carbon tax.[34]

Chong stated publicly that he supports Motion 103, which calls on the government to condemn Islamophobia in Canada and all other forms of religious and racial discrimination.[35] Chong was one of two Conservative MPs, the other being Simcoe North MP Bruce Stanton, and the only leadership candidate to vote for the motion.[36]

All electoral information is taken from Elections Canada. Italicized expenditures refer to submitted totals, and are presented when the final reviewed totals are not available.