The phonemic inventory of Miꞌkmaq is shown below.

The consonants of Miꞌkmaq can be divided into two groups: the obstruents /p, t, k, kʷ, t͡ʃ, s, x, xʷ/, and the sonorants /m, n, w, l, j/. The vowels of Miꞌkmaq are also counted as sonorants.

Miꞌkmaq orthography occasionally begins words with consonant clusters, such as gtaꞌn ("ocean") or mgumi ("ice"). However, such clusters are pronounced over separate syllables, with a schwa preceding the cluster; for instance, gtaꞌn is pronounced /ək.taːn/ while mgumi is pronounced /əm.ku.mi/. On the other hand, word-final clusters, such as in asigetg ("instigate") are pronounced over a single syllable: compare the pronunciation of asigetg, /a.si.ketk/, with mestꞌg ("taste"), /mes.tək/.

Miꞌkmaq uses free word order, based on emphasis rather than a traditionally fixed order of subjects, objects and verbs.[clarification needed] For instance, the sentence "I saw a moose standing right there on the hill" could be stated "sapmiꞌk ala nemaqtꞌk na tett tiꞌam kaqamit" (I saw him/there/on the hill/right-there/a moose/he was standing) or "sapmiꞌk ala tiꞌam nemaqtꞌk na tett kaqamit" (I saw him/there/a moose/on the hill/right-there/he was standing); the latter sentence puts emphasis on the moose by placing tiꞌam (moose) earlier in the utterance. Miꞌkmaq, as a polysynthetic language, has verbs which usually contain the sentence's subject and object: for instance, the aforementioned sapmiꞌk translates to "I saw him".

While it is thus difficult to classify Miꞌkmaq under traditional word-order categories such as SVO or SOV, a more fixed aspect in the language comes in the morphology of its verbs. Certain areas of internal morphology of verbs in Miꞌkmaq have regular placement: for instance, when the aspect of a verb is included, it appears as the first prefix, while the negative marker always appears directly after the verb root. An example for both of these instances can be seen in the Miꞌkmaq verb kisipawnatqaꞌtiꞌw (kisi-paw-natq-aꞌti-w), translated as "they cannot get out": the prefix kisi marks the verb as being in the completive aspect, whereas the negative marker, w, appears directly after the verb root aꞌti ("the two move"). However, these solidly placed elements of verbs are paired with markers that can appear throughout the word, depending again on emphasis; animacy in particular can appear fluidly throughout verbs. In short, while a few specific aspects of Miꞌkmaq can be predicted, its syntax in general is largely free and dependent on context. 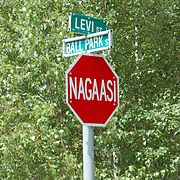 Miꞌkmaq is written using a number of Latin alphabets based on ones devised by missionaries in the 19th century. Previously, the language was written in Miꞌkmaq hieroglyphic writing, a script of partially native origin. The Francis-Smith orthography used here was developed in 1974 and was adopted as the official orthography of the Míkmaq Nation in 1980. It is the most widely used orthography and is that used by Nova Scotian Mikmaq and by the Míkmaq Grand Council. It is quite similar to the "Lexicon" orthography, differing from it only in its use of the straight apostrophe ⟨ꞌ⟩ or acute accent ⟨´⟩ instead of the colon ⟨:⟩ to mark vowel length.

When the Francis-Smith orthography was first developed, the straight apostrophe (often called a "tick") was the designated symbol for vowel length, but since to software applications incorrectly autocorrected the tick to a curly apostrophe, a secondary means of indicating vowel length was formally accepted, the acute accent. The barred-i ⟨ɨ⟩ for schwa is sometimes replaced by the more common circumflex-i ⟨î⟩. In Miꞌkmaq orthography, an apostrophe marks long vowels as well as schwa, and the letter ⟨g⟩ is used instead of the letter ⟨k⟩.

The 19th-century Pacifique orthography omits ⟨w⟩ and ⟨y⟩, using ⟨o⟩ and ⟨i⟩ for these. It also ignores vowel length. The 19th-century orthography of Silas Tertius Rand, using characters from Isaac Pitman's Phonotypic Alphabet, is also given in the table below; this orthography is more complex than the table suggests, particularly as far as vowel quantity and quality is concerned, employing various letters such as ⟨a⟩, ⟨à⟩, ⟨ɛ⟩, ⟨ɛ́⟩, ⟨ɯ⟩, ⟨ɯ́⟩, ⟨ɹ̇⟩, ⟨ɹ́⟩, ⟨ơ⟩, ⟨u⟩, etc.

Miꞌkmaq uses a decimal numeral system. Every multiple-digit number is formed by using one of the first nine numerals as a prefix or a preceding word, as seen in the number for ten, neꞌwtisgaq, a combination of the prefix neꞌwt - (derived from newt) and the root isgaꞌq meaning ten (the pattern can be seen in tapuisgaꞌq for 20, nesisgaꞌq for 30, etc.) While 10, 20, 30, 40 and 50 all use a single word containing a prefix, the tens between 60 and 90 use the numeral as a preceding word to a separate word meaning ten, teꞌsisgaꞌq: for instance, 60 is written as asꞌgom teꞌsisgaꞌq.

Numbers between the tens are stated by multiple-word phrases, beginning with the ten-based root number, such as neꞌwtisgaq, followed by jel (meaning "and" or "also") and ending with one of the nine numerals: for instance, the number 28 is constructed as tapuisgaꞌq jel ugumuljin, or literally "twenty and eight".

On top of the basic structure, numbers in Miꞌkmaq must agree with the animacy of whatever they are counting: for instance, when speaking of two people, taꞌpusijik is used, as opposed to the number used for two days, taꞌpugnaꞌq. The suffix -ijik to denote the counting of animate subjects and the suffix -gnaꞌq to denote the counting of inanimate subjects are common, but animacy-marking suffixes are somewhat fluid and vary by number and dialect.[citation needed]

Cape Breton University's Unamaꞌki College specializes "in Miꞌkmaq history, culture and education." As of 2013, "it has some 250 aboriginal students."[10]

"Parents come to me and say they hear their children in the backseat of the car speaking Miꞌkmaq and they're excited," said the Miꞌkmaq language instructor at Lnu Siꞌpuk Kinaꞌmuokuom Miꞌkmaq school in Indian Brook. Miꞌkmaq language courses are mandatory from grades Primary to 12 at the school, which only opened six years ago." Evening classes are starting as of Oct. 2013.[10]

Bible translations into the Miꞌkmaq language

Miꞌkmaq is one of the Algic languages, a family that once spanned from a small portion of California across Central Canada, the Midwestern United States, and the northeastern coast of North America. Within this family, Miꞌkmaq is part of the Eastern Algonquian subgroup spoken largely along the Atlantic coast. It is closely related to several extant languages, such as Malecite-Passamaquoddy, Massachusett and Munsee as well as extinct languages like Abenaki and Unami. Beyond having a similar language background and sharing close geographic proximity, the Miꞌkmaq notably held an alliance with four other tribes within the Eastern Algonquian language group known as the Wabanaki Confederacy: in short, a history of long-term language contact has existed between Miꞌkmaq and its close linguistic relatives.

Miꞌkmaq has many similarities with its fellow Eastern Algonquian languages, including multiple word cognates: for instance, compare the Miꞌkmaq word for "woman", eꞌpit, to the Maliseet ehpit [æpit], or the varying related words for the color "white": wapeꞌt in Miꞌkmaq, wapi [wapi] in Maliseet, waapii [wapi] in Munsee, wôbi [wɔ̃bɪ] in Abenaki and wòpe [wɔpe] in Unami. Even outside of the Eastern Algonquian subgroup, there exist similar cognates within the larger Algic family, such as the Cree wāpiskāw [wɔ:bɪska:w] and the Miami-Illinois waapi [wa:pi].[12]

Like many Native American languages, Miꞌkmaq uses a classifying system of animate versus inanimate words. The animacy system in general is common, but the specifics of Miꞌkmaq's system differ even from closely related Algic languages. For instance, in Wampanoag, the word for "sun", cone, is inanimate, but the word for "earth", ahkee, is animate, a fact used by some scholars to claim that the Wampanoag people were aware of the earth's rotation around an unmoving sun;[13] however, in Miꞌkmaq, both the word for "sun", naꞌguꞌset, and the word for "earth", ugsꞌtqamu, are animate, and parallel cultural knowledge regarding astronomy cannot be gleaned through the language. Much like grammatical gender, the core concept of animacy is shared across similar languages while the exact connotations animacy has within Miꞌkmaq are unique.

Many of Acadian French words are rooted from the Miꞌkmaq Language, due to the Acadians and Miꞌkmaq living together prior to the Expulsion of the Acadians and the British colonization of Acadia, in French-speaking areas, traces of Miꞌkmaq can also be found largely in geographical names within regions historically that were occupied by the Miꞌkmaq people, including Quebec[14] and several towns in Nova Scotia such as Antigonish and Shubenacadie. Moreover, several Miꞌkmaq words have made their way into colonizing languages: the English words "caribou"[15] and "toboggan"[16] are borrowings from Miꞌkmaq. The name caribou was probably derived from the Miꞌkmaq word xalibu or Qalipu meaning "the one who paws".[17] Marc Lescarbot in his publication in French 1610 used the term "caribou." Silas Tertius Rand translated the Miꞌkmaq word Kaleboo as caribou in his Miꞌkmaq-English dictionary (Rand 1888:98).

The aforementioned use of hieroglyphic writing in pre-colonial Miꞌkmaq society shows that Miꞌkmaq was one of the few Native American languages to have a writing system before European contact.

Linguist Peter Bakker identified two Basque loanwords in Miꞌkmaq, presumably because of extensive trade contact between Basque sailors and Native Americans in the 16th century.[18] The overall friendly exchanges starting in mid-16th century between the Miꞌkmaqs and the Basque whalers provided the basis for the development of an Algonquian–Basque pidgin with a strong Miꞌkmaq imprint, which was recorded to be still in use in the early 18th century.

A 2012 book, by the Miꞌkmaq linguist Bernie Francis and anthropologist Trudy Sable, The Language of this Land, Miꞌkmaꞌki, "examines the relationship between Miꞌkmaq language and landscape."[25]