Supreme Court of Justice of the Nation

The Supreme Court of Justice of the Nation (Spanish: Suprema Corte de Justicia de la Nación (SCJN) is the Mexican institution serving as the country's federal high court and the spearhead organisation for the judiciary of the Mexican Federal Government. It consists of eleven magistrates, known as ministers of the court, one of whom is designated the court's president.

Judges of the SCJN are appointed for 15 years.[1] They are ratified through affirmation by the Senate from a list proposed by the President of the Republic. The ministers chosen will select from among themselves who shall be the President of the Court to serve a four-year period; any given minister may serve out more than one term as president, but may not do so consecutively.

The Constitution requires that the appointment of ministers of the court should fall to those persons who have served ably, effectively and honorably in the administration of justice, or to those who have distinguished themselves by their honor, competence and professional background in the exercise of their duties.

Ministers may take leave of their posts for three reasons: 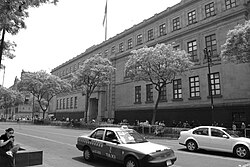 Building of the Supreme Court of Justice of Mexico.

The court itself is located just off the main plaza of Mexico City on the corners of Pino Suarez and Carranza Streets. It was built between 1935 and 1941 by Antonio Muñoz Garcia. Prior to the Conquest, this site was reserved for the ritual known as "Dance of the Flyers" which is still practiced today in Papantla. Hernán Cortés claimed the property after the Conquest and its ownership was in dispute during much of the colonial period with Cortes' heirs, the city government, and the Royal and Pontifical University all claiming rights. It was also the site of a very large market known as El Volador.[2]

Within the building, there are four flanks painted in 1941 by José Clemente Orozco, two of which are named The Social Labor Movement and Commonwealth. There is also a mural done by American artist George Biddle entitled "War and Peace" at the entrance to the law library.[2] The building also contains a mural by Rafael Cauduro, which "graphically illustrates the Gran Guignol of Mexican torture",[3] and includes a depiction of the 1968 Tlatelolco massacre as well as "a cut-away of a prison, perhaps the infamous Lecumberri Black Palace where student leaders who escaped death were jailed."[3]

While this building is still the chief seat for the Supreme Court, an alternative site at Avenida Revolución was opened in 2002.[4]

Current make-up of the Supreme Court 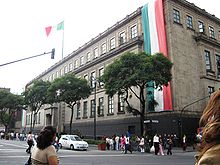 One of the chambers of the Mexican Supreme Court

Entrance to the court

Meeting of the president Enrique Peña Nieto with the eleven Ministers of the Supreme Court of Justice of the Nation.

The following persons were once Presidents of the Supreme Court under the 1917 Constitution: