Senate of the Republic (Mexico)

Bicameral legislature, including the Senate, was established on 4 October 1824. The Senate was abolished on 7 September 1857 and re-established on 13 November 1874.[1]

In a senatorial race, each party nominates two candidates who run and are elected together by direct vote. The party of the two candidates that won the second highest vote within the state or Mexico City then assigns a senator to occupy the third seat (first minority seat), according to the list of candidates that the party registered with the Federal Electoral Institute (IFE).

Senators serve six-year terms, running concurrently with the President of Mexico's Sexenio. Special elections are rare, as substitutes are chosen at every election. Until 2018, the Senate was completely renewed every six years since senators were barred from immediate reelection, but Senators can now serve a second term.

In Spanish, it is conventional to refer to each Legislature of the Senate by the Roman numeral of its term. The current session (whose term lasts from 2018 to 2021) is known as the LXIV Legislatura (64th Legislature).

A senator holds office for a period of six years. for which he was elected (from September 1 of the year of its election to the 31 August six years later), divided into two legislatures of three years each. 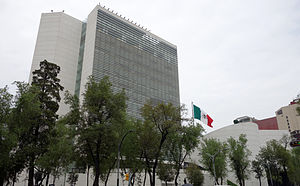 Senate of the Republic building

According to the Constitution, senators are the representatives of the nation. To be a senator, for any of the two principles of choice, you must meet the following requirements:[3]

Senators are elected for a period of six years, corresponding to two legislatures and can be reelected ojos one time for the immediate period.

They are elected by direct popular suffrage and secret ballot in every state of the republic. Each political party registers a list with two formulas of candidates, consisting of two owners and their alternates: the number 1 of the formula First Formula is denominated to him, and 2, Second Formula. The formula of candidates obtaining the highest number of votes is elected complete, becoming the first two senators of the entity; the third Senate seat is awarded to the candidate of First Formula of the political party that won second place of votes or first minority.

For their internal government has two main instances, namely:

For the office of legislative affairs, senators integrate into Commissions that are dedicated to a particular issue. The most important committees are those of Interior, Constitutional Issues, Defense, Finance, Justice, among others. Each senator belongs to at least three different commissions, and each committee shall elect a Chairman and two Secretaries 5 (according to the Commission) to coordinate their work.

The two chambers of the General Congress divided its exercise into two ordinary sessions, the first from September 1 to December 15 and the second from February 1 to April 30, it should be required may convene special sessions to dispatch urgent or pertinent matters.

The time between the regular sessions known as Recesses. There are two recesses that run from December 16 to January 31 and May 1 to August 31. During breaks, the Permanent Commission of the Congress is installed and serves as the depository of the legislature; It is composed of 37 members, of which 19 deputies and 18 senators are appointed by their respective chambers the day before the closing of the regular sessions.

The sessions of the Standing Committee are held in the Senate during the first recess and the House of Representatives in the second recess.

Among the most important functions of the Senate it is to ratify or reject the president's proposals regarding:[5]