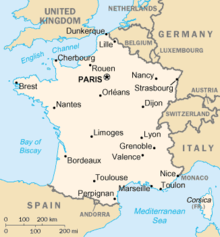 Metropolitan France (French: France métropolitaine or la Métropole), also known as European France, is the area of the French Republic which is geographically in Europe. It comprises mainland France and Corsica, as well as other islands in the Atlantic Ocean, the English Channel (French: la Manche) and the Mediterranean Sea.

The five overseas regions (departments) — French Guiana, Guadeloupe, Martinique, Mayotte and Réunion — have the same political status as metropolitan France's regions. Metropolitan France and these five overseas regions together are sometimes called la France entière ("the whole of France") by the French administration. But this France entière does not include the French overseas collectivities and territories that have more autonomy than do the overseas departments. In Overseas France, a person from metropolitan France is often called a métro, short for métropolitain.

Today, some people[who?] in Overseas France object to the use of the term la France métropolitaine due to its colonial history. They prefer to call it "the European territory of France" (le territoire européen de la France), as the Treaties of the European Union do. Likewise, they oppose treating overseas France and metropolitan France as separate entities. For example, INSEE used to calculate its statistics (demography, economy, etc.) for metropolitan France only, and to analyze separate statistics for the overseas departments and territories. People in the overseas departments have opposed this separate treatment, arguing that the then four overseas departments were fully part of France.

Note that since INSEE now calculates statistics for la France entière, this practice has spread to international institutions. For instance, the French GDP published by the World Bank includes metropolitan France and the five overseas departments. The World Bank refers to this total as "France"; it does not use the phrase "the whole of France", as INSEE does. 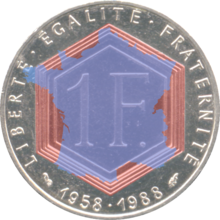 l'Hexagone illustrated by overlaying the outline of mainland France with the hexagon on the 1988 Charles de Gaulle commemorative 1 franc coin. The sides of the hexagon are: 1. the Channel coast, 2. the Atlantic coast, 3. the Pyrenees (border with Spain), 4. the Mediterranean coast, 5. the eastern border (Alps, Jura and Upper Rhine; Monaco to Karlsruhe), and 6. the northeastern border (German Rhineland and Belgium; Karlsruhe to Dunkirk).

Mainland France (French: la France continentale), or just "the mainland" (French: le continent), does not include the French islands in the Atlantic Ocean, English Channel or Mediterranean Sea, the largest of which is Corsica.

In Corsica, people from the mainland part of metropolitan France are referred to as les continentaux.

A casual synonym for the mainland part of metropolitan France is l'Hexagone ("the Hexagon"), for its approximate shape, and the adjective hexagonal may be a casual synonym of French (usually understood as metropolitan only, except in topics related to the foreign affairs and national politics of France as a whole).