Advertisement - You can get this game from STEAM
Not to be confused with Milan metropolitan area.
Metropolitan City in Lombardy, Italy

The new Metro municipalities, giving large urban areas the administrative powers of a province, are conceived for improving the performance of local administrations and to slash local spending by better coordinating the municipalities in providing basic services (including transport, school and social programs) and environment protection.[2] In this policy framework, the Mayor of Milan is designated to exercise the functions of Metropolitan mayor, presiding over a Metropolitan Council formed by 24 mayors of municipalities within the Metro municipality.

The ten most-populous municipalities within the Metropolitan City are: 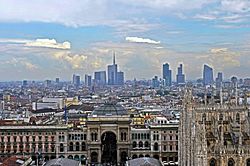 Milan metropolitan area is one of southern Europe's key transport nodes and one of Italy's most important railway hubs. Its five major railway stations, among which the Milan Central station, are among Italy's busiest.[3][4]

Milan Metro is the rapid transit system serving the city, with 4 lines and a total length of more than 90 km (56 mi). The recently opened M5 line is undergoing further expansion and the construction of the M4 line has been approved. The Milan suburban railway service comprises 10 lines and connects the metropolitan area with the city centre through the Milan Passerby underground railway. Commonly referred to as "Il Passante", it has a train running every 6 minutes (and in the city functions as a subway line with full transferability to the Milan Metro).

The city tram network consists of approximately 160 kilometres (99 mi) of track and 17 lines.[6] Bus lines cover over 1,070 km (665 mi). Milan has also taxi services operated by private companies and licensed by the City council of Milan. The city is also a key node for the national road network, being served by all the major highways of Northern Italy.

Milan metropolitan area is served by 3 international airports. Malpensa International Airport, the second busiest in Italy (about 19 million passengers in 2010), is 45 km (28 mi) from central Milan and connected to the city by the "Malpensa Express" railway service. Linate Airport, which lies within the city limits and served over 9 million passengers in 2010.[7] and Orio al Serio Airport (60 km or 37 mi from central Milan), that are mainly used for domestic and short-haul international flights.