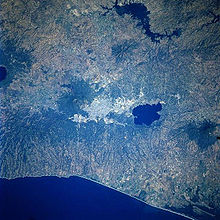 Currently, the AMSS constitutes the directional center of the country in political, financial, economic and cultural life. The most recently published official population projections for El Salvador forecasted the combined population of the fourteen municipalities at 1,767,102 in 2015, which would constitute 27.4% of the country's projected 6,460,271 inhabitants.[2]