They work in government agencies, private consulting and research services, industrial enterprises, utilities, radio and television stations, and in education. Not to be confused with weather presenters who are most often journalists presenting the weather forecast in the media, having just minimal training in meteorology.

Meteorologists study the Earth's atmosphere and its interactions with the Earth's surface, the oceans and the biosphere. Their knowledge of applied mathematics and physics allows them to understand the full range of atmospheric phenomena, from snowflake formation to the Earth's general climate.[3] 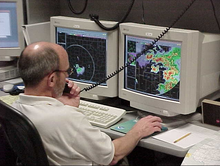 Operational meteorologist at the US Storm Prediction Center, 2006.

Meteorologists can also be consultants for private firms in studies for projets involving weather phenomena such as windfarms, tornado protection, etc... They finally can be weather presenters in the medias (radio, TV, internet). 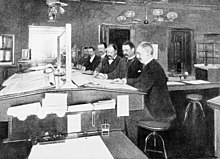 In 1894, a group of US Weather Bureau forecasters at work.

To become a meteorologist, a person must take at least one undergraduate university degree in meteorology.[3] For researchers, this training continues with higher education, while for forecasters, each country has its own way of training.[3] For example, the Meteorological Service of Canada and UK Met Office have their own training course after the university, while Météo-France takes charge of all the training once the person has passed the entrance examination at the National School of Meteorology after High School.[5] In United States, forecasters are hired by the National Weather Service or private firms after university, and receive on-the-job training, while researchers are hired according to their expertise.[6]

In some countries there is a third way for weather presenters, such as in United States, where graduate in meteorology and communication at the college or university level can be hired by medias.