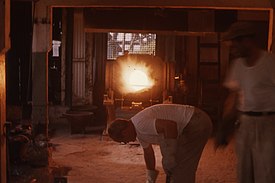 Smelting, a basic step in obtaining usable quantities of most metals. 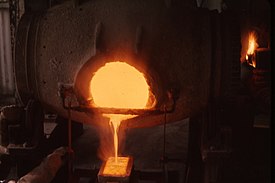 Casting; pouring molten gold into an ingot.
Gold was processed in La Luz Gold Mine (pictured) near Siuna, Nicaragua, until 1968.

Metallurgy is a domain of materials science and engineering that studies the physical and chemical behavior of metallic elements, their inter-metallic compounds, and their mixtures, which are called alloys. Metallurgy encompasses both the science and the technology of metals. That is, the way in which science is applied to the production of metals, and the engineering of metal components used in products for both consumers and manufacturers. Metallurgy is distinct from the craft of metalworking. Metalworking relies on metallurgy in a similar manner to how medicine relies on medical science for technical advancement. A specialist practitioner of metallurgy is known as a Metallurgist.

Modern metallurgists work in both emerging and traditional areas as part of an interdisciplinary team alongside material scientists, and other engineers. Some traditional areas include mineral processing, metal production, heat treatment, failure analysis, and the joining of metals (including welding, brazing, and soldering). Emerging areas for metallurgists include nanotechnology, superconductors, composites, biomedical materials, electronic materials (semiconductors), and surface engineering.

The word was originally an alchemist's term for the extraction of metals from minerals, the ending -urgy signifying a process, especially manufacturing: it was discussed in this sense in the 1797 Encyclopædia Britannica.[4] In the late 19th century it was extended to the more general scientific study of metals, alloys, and related processes.

Gold ore from Boundary Red Mountain Mine, Washington, US

The earliest recorded metal employed by humans appears to be gold, which can be found free or "native". Small amounts of natural gold have been found in Spanish caves dating to the late Paleolithic period, c. 40,000 BC.[5] Silver, copper, tin and meteoric iron can also be found in native form, allowing a limited amount of metalworking in early cultures.[6] Egyptian weapons made from meteoric iron in about 3000 BC were highly prized as "daggers from heaven".[7]

Certain metals, notably tin, lead, and at a higher temperature, copper, can be recovered from their ores by simply heating the rocks in a fire or blast furnace, a process known as smelting. The first evidence of this extractive metallurgy, dating from the 5th and 6th millennia BC,[8] has been found at archaeological sites in Majdanpek, Jarmovac near Priboj and Pločnik, in present-day Serbia. To date, the earliest evidence of copper smelting is found at the Belovode site near Plocnik.[9] This site produced a copper axe from 5500 BC, belonging to the Vinča culture.[10]

The earliest use of lead is documented from the late neolithic settlement of Yarim Tepe in Iraq,

"The earliest lead (Pb) finds in the ancient Near East are a 6th millennium BC bangle from Yarim Tepe in northern Iraq and a slightly later conical lead piece from Halaf period Arpachiyah, near Mosul.[11] As native lead is extremely rare, such artifacts raise the possibility that lead smelting may have begun even before copper smelting."[12][13]

The Balkans were the site of major Neolithic cultures, including Butmir, Vinča, Varna, Karanovo, and Hamangia. 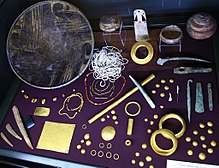 Artefacts from the Varna necropolis, Bulgaria 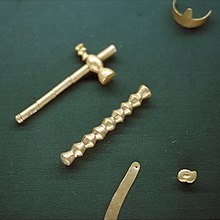 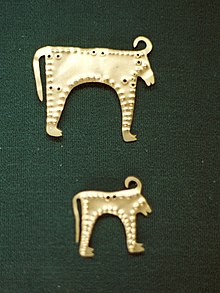 The Varna Necropolis, Bulgaria, is a burial site in the western industrial zone of Varna (approximately 4 km from the city centre), internationally considered one of the key archaeological sites in world prehistory. The oldest gold treasure in the world, dating from 4,600 BC to 4,200 BC, was discovered at the site.[14] The gold piece dating from 4,500 BC, recently founded in Durankulak, near Varna is another important example.[15][16]

Other signs of early metals are found from the third millennium BC in places like Palmela (Portugal), Los Millares (Spain), and Stonehenge (United Kingdom). However, the ultimate beginnings cannot be clearly ascertained and new discoveries are both continuous and ongoing.

Mining areas of the ancient Middle East. Boxes colors: arsenic is in brown, copper in red, tin in grey, iron in reddish brown, gold in yellow, silver in white and lead in black. Yellow area stands for arsenic bronze, while grey area stands for tin bronze.

In the Near East, about 3500 BC, it was discovered that by combining copper and tin, a superior metal could be made, an alloy called bronze. This represented a major technological shift known as the Bronze Age.

The extraction of iron from its ore into a workable metal is much more difficult than for copper or tin. The process appears to have been invented by the Hittites in about 1200 BC, beginning the Iron Age. The secret of extracting and working iron was a key factor in the success of the Philistines.[7][17]

A 16th century book by Georg Agricola called De re metallica describes the highly developed and complex processes of mining metal ores, metal extraction and metallurgy of the time. Agricola has been described as the "father of metallurgy".[20] 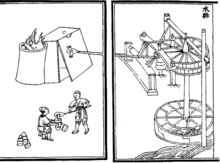 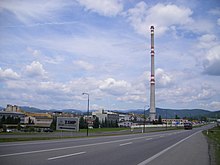 Extractive metallurgy is the practice of removing valuable metals from an ore and refining the extracted raw metals into a purer form. In order to convert a metal oxide or sulphide to a purer metal, the ore must be reduced physically, chemically, or electrolytically.

Extractive metallurgists are interested in three primary streams: feed, concentrate (valuable metal oxide/sulphide) and tailings(waste). After mining, large pieces of the ore feed are broken through crushing or grinding in order to obtain particles small enough where each particle is either mostly valuable or mostly waste. Concentrating the particles of value in a form supporting separation enables the desired metal to be removed from waste products.

Mining may not be necessary, if the ore body and physical environment are conducive to leaching. Leaching dissolves minerals in an ore body and results in an enriched solution. The solution is collected and processed to extract valuable metals.

Common engineering metals include aluminium, chromium, copper, iron, magnesium, nickel, titanium, zinc, and silicon. These metals are most often used as alloys with the noted exception of silicon. Much effort has been placed on understanding the iron-carbon alloy system, which includes steels and cast irons. Plain carbon steels (those that contain essentially only carbon as an alloying element) are used in low-cost, high-strength applications where neither weight nor corrosion are a major concern. Cast irons, including ductile iron, are also part of the iron-carbon system.

Stainless steel, particularly Austenitic stainless steels, galvanized steel, nickel alloys, titanium alloys, or occasionally copper alloys are used where resistance to corrosion is important. Aluminium alloys and magnesium alloys are commonly used when a lightweight strong part is required such as in automotive and aerospace applications.

In production engineering, metallurgy is concerned with the production of metallic components for use in consumer or engineering products. This involves the production of alloys, the shaping, the heat treatment and the surface treatment of the product. Determining the hardness of the metal using the Rockwell, Vickers, and Brinell hardness scales is a commonly used practice that helps better understand the metal's elasticity and plasticity for different applications and production processes.[21] The task of the metallurgist is to achieve balance between material properties such as cost, weight, strength, toughness, hardness, corrosion, fatigue resistance, and performance in temperature extremes. To achieve this goal, the operating environment must be carefully considered. In a saltwater environment, most ferrous metals and some non-ferrous alloys corrode quickly. Metals exposed to cold or cryogenic conditions may undergo a ductile to brittle transition and lose their toughness, becoming more brittle and prone to cracking. Metals under continual cyclic loading can suffer from metal fatigue. Metals under constant stress at elevated temperatures can creep.

Metals are shaped by processes such as:

Cold-working processes, in which the product's shape is altered by rolling, fabrication or other processes while the product is cold, can increase the strength of the product by a process called work hardening. Work hardening creates microscopic defects in the metal, which resist further changes of shape.

Various forms of casting exist in industry and academia. These include sand casting, investment casting (also called the lost wax process), die casting, and continuous castings. Each of these forms has advantages for certain metals and applications considering factors like magnetism and corrosion.[22]

Metals can be heat-treated to alter the properties of strength, ductility, toughness, hardness and resistance to corrosion. Common heat treatment processes include annealing, precipitation strengthening, quenching, and tempering.[23] The annealing process softens the metal by heating it and then allowing it to cool very slowly, which gets rid of stresses in the metal and makes the grain structure large and soft-edged so that when the metal is hit or stressed it dents or perhaps bends, rather than breaking; it is also easier to sand, grind, or cut annealed metal. Quenching is the process of cooling a high-carbon steel very quickly after heating, thus "freezing" the steel's molecules in the very hard martensite form, which makes the metal harder. There is a balance between hardness and toughness in any steel; the harder the steel, the less tough or impact-resistant it is, and the more impact-resistant it is, the less hard it is. Tempering relieves stresses in the metal that were caused by the hardening process; tempering makes the metal less hard while making it better able to sustain impacts without breaking.

Often, mechanical and thermal treatments are combined in what are known as thermo-mechanical treatments for better properties and more efficient processing of materials. These processes are common to high-alloy special steels, superalloys and titanium alloys.

Shot peening is a cold working process used to finish metal parts. In the process of shot peening, small round shot is blasted against the surface of the part to be finished. This process is used to prolong the product life of the part, prevent stress corrosion failures, and also prevent fatigue. The shot leaves small dimples on the surface like a peen hammer does, which cause compression stress under the dimple. As the shot media strikes the material over and over, it forms many overlapping dimples throughout the piece being treated. The compression stress in the surface of the material strengthens the part and makes it more resistant to fatigue failure, stress failures, corrosion failure, and cracking.[25]

Thermal spraying techniques are another popular finishing option, and often have better high temperature properties than electroplated coatings.Thermal spraying, also known as a spray welding process,[26] is an industrial coating process that consists of a heat source (flame or other) and a coating material that can be in a powder or wire form which is melted then sprayed on the surface of the material being treated at a high velocity. The spray treating process is known by many different names such as HVOF (High Velocity Oxygen Fuel), plasma spray, flame spray, arc spray, and metalizing. 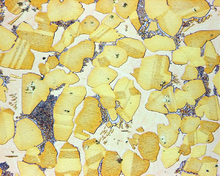 Metallography allows the metallurgist to study the microstructure of metals.

Metallurgists study the microscopic and macroscopic structure of metals using metallography, a technique invented by Henry Clifton Sorby. In metallography, an alloy of interest is ground flat and polished to a mirror finish. The sample can then be etched to reveal the microstructure and macrostructure of the metal. The sample is then examined in an optical or electron microscope, and the image contrast provides details on the composition, mechanical properties, and processing history.

Crystallography, often using diffraction of x-rays or electrons, is another valuable tool available to the modern metallurgist. Crystallography allows identification of unknown materials and reveals the crystal structure of the sample. Quantitative crystallography can be used to calculate the amount of phases present as well as the degree of strain to which a sample has been subjected.