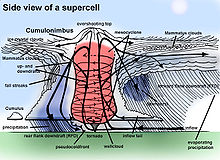 Supercell diagram with the mesocyclone rotation in red.

A mesocyclone is storm-scale region of rotation (vortex), typically around 2 to 6 mi (3.2 to 9.7 km) in diameter, within a thunderstorm. In the northern hemisphere it is particularly found in the right rear flank of a supercell or often on the eastern, or front, flank of an HP storm. The circulation of a mesocyclone covers an area much larger than the tornado that may develop within it.[1]

Mesocyclones are detectable on Doppler weather radar as a rotation signature which meets specific criteria for magnitude, vertical depth, and duration. On US NEXRAD radars displays, they will be highlighted by a yellow solid circle on the Doppler velocity products but other countries may have other conventions. Therefore, a mesocyclone should not be considered a visually-observable phenomenon; although visual evidence of rotation, such as curved inflow bands, may imply the presence of a mesocyclone.

Mesocyclones form when strong changes of wind speed and/or direction with height ("wind shear") sets parts of the lower part of the atmosphere spinning in invisible tube-like rolls. The convective updraft of a thunderstorm then draw up this spinning air, tilting the rolls' orientation upward (from parallel to the ground to perpendicular) and causing the entire updraft to rotate as a vertical column.[2]

As the updraft rotates and ingests cooler moister air from the forward flank downdraft (FFD), it may form a wall cloud, a spinning layer of clouds lowered from ambient storm cloud base under the mid-level mesocyclone. The wall cloud tends to form closer to the center of the mesocyclone. As it descends, a funnel cloud may form near its center. This is the first visible stage of tornadogenesis.

The gallery below shows the 3 stages of development of a mesocyclone and a view of the storm relative motion on radar of a mesocyclone-producing tornado over Greensburg, Kansas on May 4, 2007. The storm was producing an EF5 tornado at the time of the image.

The best way to detect and verify the presence of a mesocyclone is by Doppler weather radar. Nearby high values of opposite sign within velocity data are how they are detected.[3] Mesocyclones are most often identified in the right-rear flank of supercell thunderstorms and squall lines, and may be distinguished by a hook echo rotation signature on a weather radar map. Visual cues such as a rotating wall cloud or tornado may also hint at the presence of a mesocyclone. This is why the term has entered into wider usage in connection with rotating features in severe storms.

Tornado formation is not completely understood, but often occurs in one of two ways.[4][5]

In the first method, two conditions must be satisfied.[6] One, a horizontal spinning effect must form on the Earth's surface. This usually originates in sudden changes in wind direction or speed, known as wind shear. Two, a thundercloud, or occasionally a cumulus cloud, must be present. During a thunderstorm, updrafts are occasionally powerful enough to lift the horizontal spinning row of air upwards, turning it into a vertical air column. This vertical air column then becomes the basic structure for the tornado. Tornadoes that form in this way are often weak and generally last less than 10 minutes.[6]

The second method occurs during a supercell thunderstorm, in updrafts within the storm. When winds intensify, the force released can cause the updrafts to rotate. This rotating updraft is known as a mesocyclone.[7] For a tornado to form in this manner, a rear-flank downdraft enters the center of the mesocyclone from the back. Cold air, being denser than warm air, is able to penetrate the updraft. The combination of the updraft and downdraft completes the development of a tornado. Tornadoes that form in this method are often violent and can last over an hour.[6]

A mesoscale convective vortex (MCV), also known as a mesoscale vorticity center or Neddy eddy,[8] is a mesocyclone within a mesoscale convective system (MCS) that pulls winds into a circling pattern, or vortex, at the mid levels of the troposphere and is normally associated with anticyclonic outflow aloft. With a core only 30 to 60 miles (48 to 97 km) wide and 1 to 3 miles (1.6 to 4.8 km) deep, an MCV is often overlooked in standard weather maps. MCVs can persist for up to two days after its parent mesoscale convective system has dissipated.[8] The orphaned MCV can become the seed of the next thunderstorm outbreak. An MCV that moves into tropical waters, such as the Gulf of Mexico, can serve as the nucleus for a tropical storm or hurricane. MCVs can produce very large wind storms; sometimes winds can reach over 100 miles per hour (160 km/h). The May 2009 Southern Midwest Derecho was an extreme progressive derecho and mesoscale convective vortex event that struck southeastern Kansas, southern Missouri, and southwestern Illinois on May 8, 2009.