Mercier–Hochelaga-Maisonneuve is a borough of Montreal, Quebec, Canada.

Sanctuaire Marie-Reine-des-Coeurs, located on Sherbrooke East street, is in the borough. 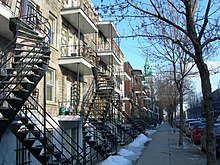 In 1860, Hochelaga developed as a village counting a little more than 1000 inhabitants. In 1874, Hudon — a cotton factory- moved in. Two years later, the North railway was extended through Hochelaga (the railway was renamed the Canadian Pacific in 1881) further catalyzing its industrial development and encouraging urbanization. In December 1883, Hochelaga was annexed to the city of Montreal against the demands of proprietors in Hochelaga. In response, they founded the village Maisonneuve and in only 15 years Maisonneuve became the 5th industrial slum of Canada.[citation needed] However, the area flourished. By 1918, however, the area was saddled with debt and aging factories and infrastructure. It was annexed to Montreal the same year.

Two years later, in 1920, many factories closed and moved east to Mercier. Mercier was an agglomeration of old villages: Beau-Rivage, Longue-Pointe and Tétreaultville. It was annexed to Montreal in 1910, before Maisonneuve. In 1960, the construction of the Autoroute 25 saw the demolition of many residential buildings in Mercier and divided it into two districts: Mercier-Ouest and Mercier-Est. Factories would continue to shut down well into the 1980s, leaving the borough ridden with poverty and a high concentration of welfare, especially in Hochelaga-Maisonneuve.[4] This has led to a population exodus, high crime rates and a general negative portrait of the area. It is, still today, often seen as the French ghetto of Montreal.

The 2010s have been marked by increased gentrification, leading to cases of vandalism of new commerces.[5]

The three regions of the borough.

Located in the east end of the Island of Montreal, it was part of the City of Montreal prior to the 2002 municipal mergers. It is composed of the Hochelaga-Maisonneuve, Mercier-Ouest and Mercier-Est areas. Each area has roughly the same population, but they differ in their commercial and social characteristics. The western region of the borough is composed of older districts while the Northern and Eastern regions have gone through a more recent urbanization. The borough is mainly composed of working class Québécois with a notable presence of Vietnamese immigrants in western regions and Italians as well as French immigrants to the North and East.

The largely oblong borough is bounded on the northwest by the borough of Rosemont—La Petite-Patrie, on the north by Saint Leonard, on the northeast by Anjou, and on the east by Montréal-Est. To the south is the Saint Lawrence River.

It has an area of 24,60 km² and the evolution of industry and transportation has profoundly transformed the borough, The presence of large industrial zones (especially in Mercier-Ouest), Montreal's port and the area's importance as a transportation axis has determined the organization of the territory's area and its urban character.

The urbanization of the three sectors differ, namely because of the varying population densities. Hochelaga-Maisonneuve has a density of 8 274 inhabitants per square kilometre. Mercier-Est has a lower density at 5 734 inhabitants per square kilometre. This density drops off quickly in Mercier-Ouest with 3 476 inhabitants mainly due to space being primarily industrial as opposed to huge residential zones in Hochelaga-Maisonneuve and Mercier-Est.

92.9% of the population speaks French at home, the highest percentage of any Montreal borough, followed by English at 2.4% and Italian at 0.8%. The immigrant population represents 12.1% of the population, significantly under the Montreal average (27.6%). Most of the immigrants are concentrated in Mercier-Ouest (17%) while there are significantly lower levels of immigrants living in Hochelaga-Maisonneuve (9%) or Mercier-Est (10%). Many Italians are concentrated in the Louis-Riel district in the north end of Mercier-Ouest which is a natural extension of St. Leonard. However, Italians have also formed communal ghettos in Mercier-Est nestled around Sherbrooke street, especially near the San Domenico Savio Church. Between 1996 and 2001 there's been an increase in immigration to the area. There are currently 15 135 landed immigrants in the borough, mainly from Italy, Vietnam, Algeria and France.

The sectors also differ when it comes to age demographics. Hochelaga-Maisonneuve has the youngest age demographics, with a higher percentage of people aged 20 – 39 years. But the age distinction between districts is really noticeable with young adults aged 20–29 years. In recent years, there has been an arrival of young adults to the district, searching for cheap rent close to downtown. This has brought up disputes over the negative and positive effects of gentrification. However, for now, there is evidence that the new population is simply in co-habitation with previous tenants of the Hochelaga-Maisonneuve district, taking up residents in renewed abandoned infrastructure. Condo projects, however, may lead to intense gentrification in the coming decade, although some claim these projects would have less impact than it did in the Plateau-Mont-Royal and Little Burgundy areas. Gentrification is less observed in Mercier-Ouest or Mercier-Est whose populations tend to be aging. The oldest population in the borough is located north of Sherbrooke in the Mercier-Ouest sector.

The borough is often cast in a negative light, mainly due to its economic planning and high poverty rate. However, it is often neglected to mention that the borough, despite a descriptive accent on its poverty, has large industrial zones and is commercially dynamic. It is often considered 'up and coming' with new revitalization plans for its residential zones.

According to 'Recensement des établissements et de l'emploi à Montréal (REEM 2000)' there's been an increase of 95% in professional and technical jobs in the borough. However, this can be attributed to gentrification in the area, specifically in the Hochelaga district.

The borough is bisected by Autoroute 25 and contains the Montreal entrance to the Louis Hippolyte Lafontaine Tunnel. It is served by the eastern end of the green line of the Montreal metro; the Honoré-Beaugrand and Radisson stations are connected to important bus termini.

Attractions in the area include the Olympic Stadium, Saputo Stadium and Montreal Biodome, the Montreal Botanical Garden, the Château Dufresne, Collège de Maisonneuve, the Marché Maisonneuve, the Théâtre Denise-Pelletier, the Hôpital Louis-H.-La Fontaine, and the Place Versailles shopping centre.

The borough is home to the Church of Nativité-de-la-Sainte-Vierge-d'Hochelaga.