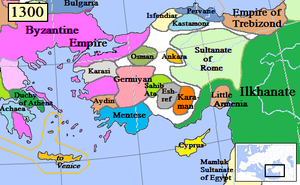 Menteshe (Turkish: Menteşe) was one of the Anatolian beyliks, the frontier principalities established by the Oghuz Turks after the decline of the Seljuk Sultanate of Rum. Founded in 1260/1290, it was named for its founder, Mentesh Bey ("bey" is a title that indicates a tribal chieftain). Its capital city was Milas (Mylasa) in southwestern Anatolia.[1]

The heartland of the beylik corresponded roughly to ancient Caria or to the early modern Muğla Province in Turkey, including the province's three protruding peninsulas. Among the important centers within the beylik were the cities of Beçin, Milas, Balat, Elmali, Finike, Kaş, Mağrı (modern Fethiye), Muğla, Çameli, Acıpayam, Tavas, Bozdoğan, and Çine. The city of Aydın (formerly Tralles) was controlled by this beylik for a time, during which it was called "Güzelhisar"; it later was transferred to the Aydinids in the north, who renamed the city for the founder of their dynasty.

The beys of Menteshe were serious regional naval powers in their time.[2] They also left important works of architecture, such as the Firuz Bey Mosque in Milas and İlyas Bey Mosque in Balat.

Menteş first submitted to Ottoman rule in 1390, during the reign of Bayezid I, "the Thunderbolt".[3] After 1402, Tamerlane restored the beylik to Menteşoğlu İlyas Bey, who recognized Ottoman overlordship in 1414. A dozen years later, in 1426, Menteshe was definitively incorporated into the Ottoman realm.[4]

The present-day Muğla Province of Turkey was named the sub-province (sanjak) of Menteshe until the early years of the Republic of Turkey, although the provincial seat had been moved from Milas to Muğla with the establishment of Ottoman rule in the 15th century.