Advertisement - You can get this game from STEAM
This article is about selective barrier membranes. For other uses, see Membrane (disambiguation). 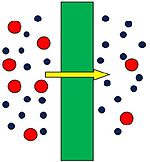 Schematic of size based membrane exclusion

A membrane is a selective barrier; it allows some things to pass through but stops others. Such things may be molecules, ions, or other small particles. Biological membranes include cell membranes (outer coverings of cells or organelles that allow passage of certain constituents);[1] nuclear membranes, which cover a cell nucleus; and tissue membranes, such as mucosae and serosae. Synthetic membranes are made by humans for use in laboratories and industry (such as chemical plants).

This concept of a membrane has been known since the eighteenth century but was used little outside of the laboratory until the end of World War II. Drinking water supplies in Europe had been compromised by the war and membrane filters were used to test for water safety. However, due to the lack of reliability, slow operation, reduced selectivity and elevated costs, membranes were not widely exploited. The first use of membranes on a large scale was with micro-filtration and ultra-filtration technologies. Since the 1980s, these separation processes, along with electrodialysis, are employed in large plants and, today, several experienced companies serve the market.[2]

The degree of selectivity of a membrane depends on the membrane pore size. Depending on the pore size, they can be classified as microfiltration (MF), ultrafiltration (UF), nanofiltration (NF) and reverse osmosis (RO) membranes. Membranes can also be of various thickness, with homogeneous or heterogeneous structure. Membranes can be neutral or charged, and particle transport can be active or passive. The latter can be facilitated by pressure, concentration, chemical or electrical gradients of the membrane process. Membranes can be generally classified into synthetic membranes and biological membranes.[3]

Microfiltration removes particles higher than 0.08-2 µm and operates within a range of 7-100 kPa.[4] Microfiltration is used to remove residual suspended solids (SS), to remove bacteria in order to condition the water for effective disinfection and as a pre-treatment step for reverse osmosis.

Relatively recent developments are membrane bioreactors (MBR) which combine microfiltration and a bioreactor for biological treatment.

Ultrafiltration removes particles higher than 0.005-2 µm and operates within a range of 70-700kPa.[4] Ultrafiltration is used for many of the same applications as microfiltration. Some ultrafiltration membranes have also been used to remove dissolved compounds with high molecular weight, such as proteins and carbohydrates. Also, they can remove viruses and some endotoxins.

The wall of an ultrafiltration hollow fiber membrane, with characteristic outer (top) and inner (bottom) layers of pores.

Nanofiltration is also known as “loose” RO and can reject particles smaller than 0,002 µm. Nanofiltration is used for the removal of selected dissolved constituents from wastewater. NF is primarily developed as a membrane softening process which offers an alternative to chemical softening.

Likewise, nanofiltration can be used as a pre-treatment before directed reverse osmosis. The main objectives of NF pre-treatment are:[5] (1). minimize particulate and microbial fouling of the RO membranes by removal of turbidity and bacteria, (2) prevent scaling by removal of the hardness ions, (3) lower the operating pressure of the RO process by reducing the feed-water total dissolved solids (TDS) concentration.

Reverse osmosis is commonly used for desalination. As well, RO is commonly used for the removal of dissolved constituents from wastewater remaining after advanced treatment with microfiltration. RO excludes ions but requires high pressures to produce deionized water (850-7000 kPa).

An emerging class of membranes rely on nanostructure channels to separate materials at the molecular scale. These include carbon nanotube membranes, graphene membranes, membranes made from polymers of intrinsic microporosity (PIMS), and membranes incorporating metal-organic-frameworks (MOFs). These membranes can be used for size selective separations such as nanofiltration and reverse osmosis, but also adsorption selective separations such as olefins from paraffins and alcohols from water that traditionally have required expensive and energy intensive distillation.

The key elements of any membrane process relate to the influence of the following parameters on the overall permeate flux are:

The total permeate flow from a membrane system is given by following equation:

The permeability (k) [m·s−2·bar−1] of a membrane is given by the next equation:

The transmembrane pressure (TMP) is given by the following expression:

The rejection (r) could be defined as the number of particles that have been removed from the feedwater.

The corresponding mass balance equations are:

To control the operation of a membrane process, two modes, concerning the flux and to the TMP (Trans Membrane Pressure), can be used. These modes are (1) constant TMP and (2) constant flux.

The operation modes will be affected when the rejected materials and particles in the retentate tend to accumulate in the membrane. At a given TMP, the flux of water through the membrane will decrease and at a given flux, the TMP will increase, reducing the permeability (k). This phenomenon is known as fouling, and it is the main limitation to membrane process operation.

Two operation modes for membranes can be used. These modes are:

Filtration leads to an increase in the resistance against the flow. In the case of the dead-end filtration process, the resistance increases according to the thickness of the cake formed on the membrane. As a consequence, the permeability (k) and the flux rapidly decrease, proportionally to the solids concentration [1] and, thus, requiring periodic cleaning.

For cross-flow processes, the deposition of material will continue until the forces of the binding cake to the membrane will be balanced by the forces of the fluid. At this point, cross-flow filtration will reach a steady-state condition [2], and thus, the flux will remain constant with time. Therefore, this configuration will demand less periodic cleaning.

Fouling can be defined as the potential deposition and accumulation of constituents in the feed stream on the membrane.

Fouling can take place through several physicochemical and biological mechanisms which are related to the increased deposition of solid material onto the membrane surface. The main mechanisms by which fouling can occur, are:

Pore narrowing, which consists of solid material that it has been attached to the interior surface of the pores.
Pore blocking occurs when the particles of the feed-water become stuck in the pores of the membrane.
Gel/cake layer formation takes places when the solid matter in the feed is larger than the pore sizes of the membrane.

Since fouling is an important consideration in the design and operation of membrane systems, as it affects pre-treatment needs, cleaning requirements, operating conditions, cost and performance, it should prevent, and if necessary, removed. Optimizing the operation conditions is important to prevent fouling. However, if fouling has already taken place, it should be removed by using physical or chemical cleaning.

Recent studies have assessed to combine relaxation and backwashing for optimum results,.[9][10]

Chemical cleaning. Relaxation and backwashing effectiveness will decrease with operation time as more irreversible fouling accumulates on the membrane surface. Therefore, besides the physical cleaning, chemical cleaning may also be recommended. They include:

Optimizing the operation condition. Several mechanisms can be carried out to optimize the operating conditions of the membrane to prevent fouling, for instance:

Distinct features of membranes are responsible for the interest in using them as additional unit operation for separation processes in fluid processes. Some advantages noted include:[2]

However, their overwhelming success in biological systems is not matched by their application.[14] The main reasons for this are named