Each Commissioner is first nominated by their member state in consultation with the Commission President. The President's team is then subject to hearings at the European Parliament, which questions them and then votes on their suitability as a whole. If members of the team are found to be inappropriate, the President must then reshuffle the team or request a new candidate from the member state or risk the whole Commission being voted down.[citation needed] As Parliament cannot vote against individual Commissioners there is usually a compromise whereby the worst candidates are removed but minor objections are put aside, or dealt with by adjusting portfolios, so the Commission can take office. Once the team is approved by the Parliament, it is formally put into office by the European Council (TEU Article 17:7).[citation needed]

Although members of the Commission are allocated between member states, they do not represent their states; instead they are supposed to act in European interests. Normally a member state will nominate someone of the same political party as that which forms the government of the day. There are exceptions such as Member of the Commission Burke (of Fine Gael) was nominated by Taoiseach Haughey (of Fianna Fáil); in the past, when the larger states had two seats, they often went to the two major parties, such as in the United Kingdom.

Partly due to the member-state selection procedure, only 9 of the current 27 Members are women and no ethnic minorities have ever served on a Commission to date. Peter Mandelson (2004 to October 2008)[1] was the first openly gay Commissioner. The first female Commissioners were Christiane Scrivener and Vasso Papandreou in the 1989 Delors Commission.

European Parliament President Jerzy Buzek proposed in 2010 that Commissioners be directly elected, by member states placing their candidate at the top of their voting lists in European elections. That would give them individually, and the body as a whole, a democratic mandate.[2]

Having been appointed as a Member of the European Commission by the European Council, following the vote of consent by the European Parliament I solemnly undertake: to respect the Treaties and the Charter of Fundamental Rights of the European Union in the fulfilment of all my duties; to be completely independent in carrying out my responsibilities, in the general interest of the Union; in the performance of my tasks, neither to seek nor to take instructions from any Government or from any other institution, body, office or entity; to refrain from any action incompatible with my duties or the performance of my tasks. I formally note the undertaking of each Member State to respect this principle and not to seek to influence Members of the Commission in the performance of their tasks. I further undertake to respect, both during and after my term of office, the obligation arising therefrom, and in particular the duty to behave with integrity and discretion as regards the acceptance, after I have ceased to hold office, of certain appointments or benefits.

Until 2004, the larger member states (Spain upwards) received two Commissioners and the smaller states received one. As the size of the body was increasing with enlargement, the larger states lost their second commissioner after the 2004 enlargement with the new Barroso Commission being appointed under the Treaty of Nice.

The failed European Constitution first mandated that the number of Commissioners should equal two-thirds of the member states. This could be changed by a vote in the European Council, in case the number was still too high in the future. The Constitution failed ratification but this change was brought in with the Treaty of Lisbon. However, as Lisbon was being ratified the Irish electorate voted against it with one reason being the fear of losing a Commissioner. The Irish then voted again, in favour for the treaty on a number of conditions; one being that they kept their commissioner.

In 2009, in what was known as the 26+1 formula, it was proposed that (in order to comply with the Nice Treaty provision that there should be fewer commissioners than members) instead of a commissioner one member state should fill the post of High Representative.[6] An idea floated in 2007 was the creation of junior members for smaller states.[7] In 2004, there was a proposal to create a "super-commissioner" who would be vice president of the Commission and would "be able to intervene in all decisions concerning EU projects that have an impact" on the economic performance of the EU.[8]

In addition to its role in approving a new Commission, the European Parliament has the power at any time to force the entire Commission to resign through a vote of no confidence. This requires a vote that makes up at least two-thirds of those voting and a majority of the total membership of the Parliament. While it has never used this power, it threatened to use it against the Commission headed by Jacques Santer in 1999 over allegations of corruption. In response, the Santer Commission resigned en masse of its own accord, the only time a Commission has done so.

The make up and distribution of portfolios are determined by the Commission President and do not always correspond with the Commission's departments (Directorates-General). While some have been fairly consistent in make up between each Commission, some have only just been created or are paired with others. With a record number of Members in 2007, the portfolios have become very thin even though the responsibilities of the commission have increased.[13] This Commission left office on 1 December 2019.

A Commissioner can come under a great deal of influence from the staff under their control. The European Civil Service is permanent whereas a Commissioner is in office usually for just five years. Hence it is the service which know the workings of the Commission and have longer term interests. Strong leadership from a Commissioner, who knows the workings of their portfolio, can overcome the power of the service. An example would be Pascal Lamy; however, the best people are usually kept by their national governments, leading to less solid candidates getting the job.[14] 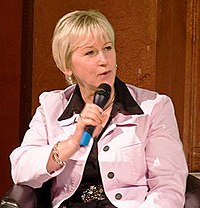 Margot Wallström has said that the EU has to get more political and controversial.

Commissioners are required to remain above national politics while exercising their duties in the Commission , but are normally involved in their European-level political party. However the requirement to keep out of national politics has slowly been eroded.[citation needed] During the Prodi Commission, Anna Diamantopoulou (Employment and Social Affairs) took leave from the Commission to participate in the 2004 Greek elections and resigned when she won a seat despite her party losing. Romano Prodi campaigned in the 2001 Italian elections while still president.[15]

Louis Michel (Development & Humanitarian Aid) announced that he would go on unpaid leave to take part in the 2007 Belgian elections.[16] Although he positioned himself so as not to be elected, the European Parliament's development committee asked the Parliament's legal service to assess if his participation violated the treaties.[17] Michel claimed that politicisation of this manner is part of reconnecting the Union with its citizens. The Commission revised its code of conduct for Commissioners allowing them to "be active members of political parties or trade unions". To participate in an election campaign they are required to "withdraw from the work of the Commission for the duration of the campaign".

This does throw their independence in doubt, where a politician leaves their national scene for one or two terms and returns to it for a new job.[18] Most in essence owe their positions to nomination and support from national party leaders and parties they have been aligned to; usually seeking to return to the party-political fray.[19]

Politicisation has even gone so far as commissioners backing national candidates, with Neelie Kroes (Competition) backing Angela Merkel in the 2005 German elections and Margot Wallström (Institutional Relations & Communication Strategy) backing Ségolène Royal in the 2007 French elections.[15] Wallström defended this claiming that the EU has to get more political and controversial as being a vital role in communicating the Commission.[20] Wallström has been notable for engaging in debate and politics, she was the first commissioner to start her own blog.

Appointment to the Commission has the effect of removing a political figure from a country for a period of years, and this has been compared to the ancient Athenian practice of ostracism.[24]