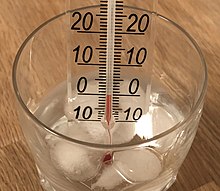 Ice cubes put in water will reach the 0 °C melting point of ice when they start to melt.

When considered as the temperature of the reverse change from liquid to solid, it is referred to as the freezing point or crystallization point. Because of the ability of some substances to supercool, the freezing point is not considered as a characteristic property of a substance. When the "characteristic freezing point" of a substance is determined, in fact the actual methodology is almost always "the principle of observing the disappearance rather than the formation of ice, that is, the melting point.[1] 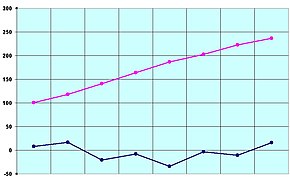 For most substances, melting and freezing points are approximately equal. For example, the melting point and freezing point of mercury is 234.32 Kelvin (−38.83 °C or −37.89 °F).[2] However, certain substances possess differing solid-liquid transition temperatures. For example, agar melts at 85 °C (185 °F) and solidifies from 31 °C (88 °F; 304 K); such direction dependence is known as hysteresis. The melting point of ice at 1 atmosphere of pressure is very close [3] to 0 °C (32 °F; 273 K); this is also known as the ice point. In the presence of nucleating substances, the freezing point of water is not always the same as the melting point. In the absence of nucleators water can exist as a supercooled liquid down to −48.3 °C (−55 °F, 224.8 K) before freezing.

Kofler bench with samples for calibration

Many laboratory techniques exist for the determination of melting points. A Kofler bench is a metal strip with a temperature gradient (range from room temperature to 300 °C). Any substance can be placed on a section of the strip, revealing its thermal behaviour at the temperature at that point. Differential scanning calorimetry gives information on melting point together with its enthalpy of fusion. 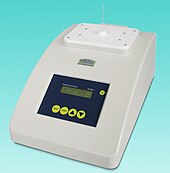 A basic melting point apparatus for the analysis of crystalline solids consists of an oil bath with a transparent window (most basic design: a Thiele tube) and a simple magnifier. Several grains of a solid are placed in a thin glass tube and partially immersed in the oil bath. The oil bath is heated (and stirred) and with the aid of the magnifier (and external light source) melting of the individual crystals at a certain temperature can be observed. A metal block might be used instead of an oil bath. Some modern instruments have automatic optical detection.

The measurement can also be made continuously with an operating process. For instance, oil refineries measure the freeze point of diesel fuel "online", meaning that the sample is taken from the process and measured automatically. This allows for more frequent measurements as the sample does not have to be manually collected and taken to a remote laboratory.

For refractory materials (e.g. platinum, tungsten, tantalum, some carbides and nitrides, etc.) the extremely high melting point (typically considered to be above, say, 1800 °C) may be determined by heating the material in a black body furnace and measuring the black-body temperature with an optical pyrometer. For the highest melting materials, this may require extrapolation by several hundred degrees. The spectral radiance from an incandescent body is known to be a function of its temperature. An optical pyrometer matches the radiance of a body under study to the radiance of a source that has been previously calibrated as a function of temperature. In this way, the measurement of the absolute magnitude of the intensity of radiation is unnecessary. However, known temperatures must be used to determine the calibration of the pyrometer. For temperatures above the calibration range of the source, an extrapolation technique must be employed. This extrapolation is accomplished by using Planck's law of radiation. The constants in this equation are not known with sufficient accuracy, causing errors in the extrapolation to become larger at higher temperatures. However, standard techniques have been developed to perform this extrapolation.

In determining melting points of a refractory substance by this method, it is necessary to either have black body conditions or to know the emissivity of the material being measured. The containment of the high melting material in the liquid state may introduce experimental difficulties. Melting temperatures of some refractory metals have thus been measured by observing the radiation from a black body cavity in solid metal specimens that were much longer than they were wide. To form such a cavity, a hole is drilled perpendicular to the long axis at the center of a rod of the material. These rods are then heated by passing a very large current through them, and the radiation emitted from the hole is observed with an optical pyrometer. The point of melting is indicated by the darkening of the hole when the liquid phase appears, destroying the black body conditions. Today, containerless laser heating techniques, combined with fast pyrometers and spectro-pyrometers, are employed to allow for precise control of the time for which the sample is kept at extreme temperatures. Such experiments of sub-second duration address several of the challenges associated with more traditional melting point measurements made at very high temperatures, such as sample vaporization and reaction with the container. 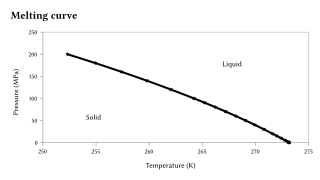 For a solid to melt, heat is required to raise its temperature to the melting point. However, further heat needs to be supplied for the melting to take place: this is called the heat of fusion, and is an example of latent heat.

From a thermodynamics point of view, at the melting point the change in Gibbs free energy (ΔG) of the material is zero, but the enthalpy (H) and the entropy (S) of the material are increasing (ΔH, ΔS > 0). Melting phenomenon happens when the Gibbs free energy of the liquid becomes lower than the solid for that material. At various pressures this happens at a specific temperature. It can also be shown that:

The melting point is sensitive to extremely large changes in pressure, but generally this sensitivity is orders of magnitude less than that for the boiling point, because the solid-liquid transition represents only a small change in volume.[10][11] If, as observed in most cases, a substance is more dense in the solid than in the liquid state, the melting point will increase with increases in pressure. Otherwise the reverse behavior occurs. Notably, this is the case of water, as illustrated graphically to the right, but also of Si, Ge, Ga, Bi. With extremely large changes in pressure, substantial changes to the melting point are observed. For example, the melting point of silicon at ambient pressure (0.1 MPa) is 1415 °C, but at pressures in excess of 10 GPa it decreases to 1000 °C.[12]

Melting points are often used to characterize organic and inorganic compounds and to ascertain their purity. The melting point of a pure substance is always higher and has a smaller range than the melting point of an impure substance or, more generally, of mixtures. The higher the quantity of other components, the lower the melting point and the broader will be the melting point range, often referred to as the "pasty range". The temperature at which melting begins for a mixture is known as the "solidus" while the temperature where melting is complete is called the "liquidus". Eutectics are special types of mixtures that behave like single phases. They melt sharply at a constant temperature to form a liquid of the same composition. Alternatively, on cooling a liquid with the eutectic composition will solidify as uniformly dispersed, small (fine-grained) mixed crystals with the same composition.

In contrast to crystalline solids, glasses do not possess a melting point; on heating they undergo a smooth glass transition into a viscous liquid. Upon further heating, they gradually soften, which can be characterized by certain softening points.

The freezing point of a solvent is depressed when another compound is added, meaning that a solution has a lower freezing point than a pure solvent. This phenomenon is used in technical applications to avoid freezing, for instance by adding salt or ethylene glycol to water.

A high melting point results from a high heat of fusion, a low entropy of fusion, or a combination of both. In highly symmetrical molecules the crystal phase is densely packed with many efficient intermolecular interactions resulting in a higher enthalpy change on melting.

Like many high symmetry compounds, tetrakis(trimethylsilyl)silane has a very high melting point (m.p.) of 319-321 °C. It tends to sublime, so the m.p. determination requires that the sample be sealed in a tube.[15]

An attempt to predict the bulk melting point of crystalline materials was first made in 1910 by Frederick Lindemann.[16] The idea behind the theory was the observation that the average amplitude of thermal vibrations increases with increasing temperature. Melting initiates when the amplitude of vibration becomes large enough for adjacent atoms to partly occupy the same space. The Lindemann criterion states that melting is expected when the vibration root mean square amplitude exceeds a threshold value.

Assuming that all atoms in a crystal vibrate with the same frequency ν, the average thermal energy can be estimated using the equipartition theorem as[17]

where m is the atomic mass, ν is the frequency, u is the average vibration amplitude, kB is the Boltzmann constant, and T is the absolute temperature. If the threshold value of u2 is c2a2 where c is the Lindemann constant and a is the atomic spacing, then the melting point is estimated as

Several other expressions for the estimated melting temperature can be obtained depending on the estimate of the average thermal energy. Another commonly used expression for the Lindemann criterion is[18]

From the expression for the Debye frequency for ν, we have

where θD is the Debye temperature and h is the Planck constant. Values of c range from 0.15–0.3 for most materials.[19]

In February 2011, Alfa Aesar released over 10,000 melting points of compounds from their catalog as open data. This dataset has been used to create a random forest model for melting point prediction which is now freely available.[20] Open melting point data are also available from Nature Precedings.[21] High quality data mined from patents and also models[22] developed with these data were published by Tetko et al.[23]