Advertisement - You can get this game from STEAM
Ancient archaeological site in Balochistan, Pakistan

Mehrgarh (Balochi: Mehrgaŕh; Urdu: مہرگڑھ‎) is a Neolithic site (dated c. 7000 BCE to c. 2500/2000 BCE), which lies on the Kacchi Plain of Balochistan, Pakistan.[1] Mehrgarh is located near the Bolan Pass, to the west of the Indus River valley and between the present-day Pakistani cities of Quetta, Kalat and Sibi. The site was discovered in 1974 by an archaeological team directed by French archaeologists Jean-François Jarrige and Catherine Jarrige, and was excavated continuously between 1974 and 1986, and again from 1997 to 2000. Archaeological material has been found in six mounds, and about 32,000 artifacts have been collected. The earliest settlement at Mehrgarh—in the northeast corner of the 495-acre (2.00 km2) site—was a small farming village dated between 7000 BCE and 5500 BCE.

Mehrgarh is one of the earliest sites with evidence of farming and herding in South Asia.[2][3][note 1] Mehrgarh was influenced by the Near Eastern Neolithic,[13] with similarities between "domesticated wheat varieties, early phases of farming, pottery, other archaeological artefacts, some domesticated plants and herd animals."[14][note 2] According to Parpola, the culture migrated into the Indus Valley and became the Indus Valley Civilisation.[15]

Jean-Francois Jarrige argues for an independent origin of Mehrgarh. Jarrige notes "the assumption that farming economy was introduced full-fledged from Near-East to South Asia,"[16][note 2] and the similarities between Neolithic sites from eastern Mesopotamia and the western Indus valley, which are evidence of a "cultural continuum" between those sites. But given the originality of Mehrgarh, Jarrige concludes that Mehrgarh has an earlier local background," and is not a "'backwater' of the Neolithic culture of the Near East."[16]

Gallego Romero et al. (2011) state that their research on lactose tolerance in India suggests that "the west Eurasian genetic contribution identified by Reich et al. (2009) principally reflects gene flow from Iran and the Middle East."[35] Gallego Romero notes that Indians who are lactose-tolerant show a genetic pattern regarding this tolerance which is "characteristic of the common European mutation."[36] According to Romero, this suggests that "the most common lactose tolerance mutation made a two-way migration out of the Middle East less than 10,000 years ago. While the mutation spread across Europe, another explorer must have brought the mutation eastward to India – likely traveling along the coast of the Persian Gulf where other pockets of the same mutation have been found."[36] They further note that "[t]he earliest evidence of cattle herding in south Asia comes from the Indus River Valley site of Mehrgarh and is dated to 7,000 YBP."[35][note 4]

Archaeologists divide the occupation at the site into eight periods.

The Mehrgarh Period I (pre-7000 BCE-5500 BCE)[note 5] was Neolithic and aceramic, without the use of pottery. The earliest farming in the area was developed by semi-nomadic people using plants such as wheat and barley and animals such as sheep, goats and cattle. The settlement was established with unbaked mud-brick buildings and most of them had four internal subdivisions. Numerous burials have been found, many with elaborate goods such as baskets, stone and bone tools, beads, bangles, pendants and occasionally animal sacrifices, with more goods left with burials of males. Ornaments of sea shell, limestone, turquoise, lapis lazuli and sandstone have been found, along with simple figurines of women and animals. Sea shells from far sea shore and lapis lazuli found as far away as present-day Badakshan, Afghanistan shows good contact with those areas. A single ground stone axe was discovered in a burial, and several more were obtained from the surface. These ground stone axes are the earliest to come from a stratified context in South Asia.

Periods I, II and III are considered contemporaneous with another site called Kili Gul Mohammad. The aceramic Neolithic phase in the region is now called 'Kili Gul Muhammad phase', and it is dated 7000-5000 BC. Yet the Kili Gul Muhammad site, itself, may have started c. 5500 BC.[39]

In 2001, archaeologists studying the remains of nine men from Mehrgarh made the discovery that the people of this civilization had knowledge of proto-dentistry. In April 2006, it was announced in the scientific journal Nature that the oldest (and first early Neolithic) evidence for the drilling of human teeth in vivo (i.e. in a living person) was found in Mehrgarh. According to the authors, their discoveries point to a tradition of proto-dentistry in the early farming cultures of that region. "Here we describe eleven drilled molar crowns from nine adults discovered in a Neolithic graveyard in Pakistan that dates from 7,500 to 9,000 years ago. These findings provide evidence for a long tradition of a type of proto-dentistry in an early farming culture."[40]

The Mehrgarh Period II (5500 BCE–4800 BCE) and Merhgarh Period III (4800 BCE–3500 BCE) were ceramic Neolithic, using pottery, and later chalcolithic. Period II is at site MR4 and Period III is at MR2.[41] Much evidence of manufacturing activity has been found and more advanced techniques were used. Glazed faience beads were produced and terracotta figurines became more detailed. Figurines of females were decorated with paint and had diverse hairstyles and ornaments. Two flexed burials were found in Period II with a red ochre cover on the body. The amount of burial goods decreased over time, becoming limited to ornaments and with more goods left with burials of females. The first button seals were produced from terracotta and bone and had geometric designs. Technologies included stone and copper drills, updraft kilns, large pit kilns and copper melting crucibles. There is further evidence of long-distance trade in Period II: important as an indication of this is the discovery of several beads of lapis lazuli, once again from Badakshan. Mehrgarh Periods II and III are also contemporaneous with an expansion of the settled populations of the borderlands at the western edge of South Asia, including the establishment of settlements like Rana Ghundai, Sheri Khan Tarakai, Sarai Kala, Jalilpur and Ghaligai.[41] 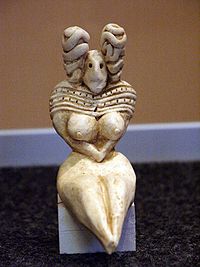 Female figure from Mehrgarh; c.3000 BCE;[42] terracotta; height: 9.5 cm (3​3⁄4 in). Part of the Neolithic ‘Venus figurines’ tradition, this figure's abundant breasts and hips suggest links to fertility and procreation. Her hair was probably painted black; brown ochre would have covered the body, and her necklace was probably yellow. Her seated posture, with arms crossed under the breasts, is common throughout the region, as is her extravagant hairstyle

Somewhere between 2600 BCE and 2000 BCE, the city seems to have been largely abandoned in favor of the larger and fortified town Nausharo five miles away when the Indus Valley Civilization was in its middle stages of development. Historian Michael Wood suggests this took place around 2500 BCE.[44]

The last period is found at the Sibri cemetery, about 8 kilometers from Mehrgarh.[41]

The oldest known example of the lost-wax technique comes from a 6,000-year-old wheel-shaped copper amulet found at Mehrgarh. The amulet was made from unalloyed copper, an unusual innovation that was later abandoned.[47] 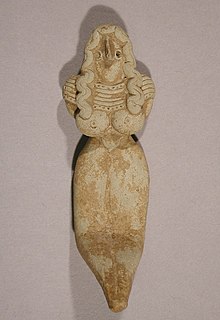 The oldest ceramic figurines in South Asia were found at Mehrgarh. They occur in all phases of the settlement and were prevalent even before pottery appears. The earliest figurines are quite simple and do not show intricate features. However, they grow in sophistication with time and by 4000 BC begin to show their characteristic hairstyles and typical prominent breasts. All the figurines up to this period were female. Male figurines appear only from period VII and gradually become more numerous. Many of the female figurines are holding babies, and were interpreted as depictions of the "mother goddess". However, due to some difficulties in conclusively identifying these figurines with the "mother goddess", some scholars prefer using the term "female figurines with likely cultic significance".[49][50][51]

Evidence of pottery begins from Period II. In period III, the finds become much more abundant as the potter's wheel is introduced, and they show more intricate designs and also animal motifs.[41] The characteristic female figurines appear beginning in Period IV and the finds show more intricate designs and sophistication. Pipal leaf designs are used in decoration from Period VI.[53] Some sophisticated firing techniques were used from Period VI and VII and an area reserved for the pottery industry has been found at mound MR1. However, by Period VIII, the quality and intricacy of designs seem to have suffered due to mass production, and due to a growing interest in bronze and copper vessels.[43]

There are two types of burials in the Mehrgarh site. There were individual burials where a single individual was enclosed in narrow mud walls and collective burials with thin mud brick walls within which skeletons of six different individuals were discovered. The bodies in the collective burials were kept in a flexed position and were laid east to west. Child bones were found in large jars or urn burials (4000~3300 BCE).[54]

Metal finds have dated as early as Period IIB, with a few copper items.[41][53]