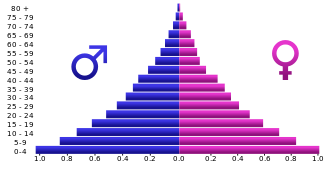 Population distribution by age and gender for Angola in 2005.

A population pyramid, also called an "age-gender-pyramid", is a graphical illustration that shows the distribution of various age groups in a population (typically that of a country or region of the world), which forms the shape of a pyramid when the population is growing.[1] Males are conventionally shown on the left and females on the right, and they may be measured by raw number or as a percentage of the total population. This tool can be used to visualize the age of a particular population.[2] It is also used in ecology to determine the overall age distribution of a population; an indication of the reproductive capabilities and likelihood of the continuation of a species.

The measures of central tendency, mean, median, and mode, should be considered when assessing a population pyramid. since the data is not completely accurate. For example, the average age could be used to determine the type of population in a particular region. A population with an average age of 15 would have a young population compared to a population that has an average age of 55, which would be considered an older population. It is also important to consider these measures because the collected data is not completely accurate. The mid-year population is often used in calculations to account for the number of births and deaths that occur.

A population pyramid gives a clear picture of how a country transitions from high fertility to low fertility rate. The broad base of the pyramid means a relative majority of the population lies between ages 0–14, which tells us that the fertility rate of the country is high and above population sub-replacement fertility level. The older population is declining over time due to a shorter life expectancy of sixty years.[5] However, there are still more females than males in these ranges since women have a longer life expectancy. As reported by the Proceedings of the National Academy of Sciences, women tend to live longer than men because women do not partake in risky behaviors. Also, Weeks' Population: an Introduction to Concepts and Issues, considered that the sex ratio gap for the older ages will shrink due to women's health declining due to the effects of smoking, as suggested by the United Nations and U.S. Census Bureau. Moreover, it can also reveal the age-dependency ratio of a population. Populations with a big base, young population, or a big top, an older population, shows that there is a higher dependency ratio. The dependency ratio refers to how many people are dependent on the working class (ages 15–64). According to Weeks' Population: an Introduction to Concepts and Issues, population pyramids can be used to predict the future, known as a population forecast. Population momentum, when a population's birth rates continue to increase even after replacement level has been reached, can even be predicted if a population has a low mortality rate since the population will continue to grow. This then brings up the term doubling time, which is used to predict when the population will double in size. Lastly, a population pyramid can even give insight on the economic status of a country from the age stratification since the distribution of supplies are not evenly distributed through a population.

In the demographic transition model, the size and shape of population pyramids vary. In stage one of the demographic transition model, the pyramids have the most defined shape. They have the ideal big base and skinny top. In stage two, the pyramid looks similar, but starts to widen in the middle age groups. In stage three, the pyramids start to round out and look similar in shape to a tombstone. In stage four, there is a decrease in the younger age groups. This causes the base of the widened pyramid to narrow. Lastly, in stage five, the pyramid starts to take on the shape of a kite as the base continues to decrease. The shape of the population is dependent upon what the economy is like in the country. More developed countries can be found in stages three four and five while the least developed countries have a population represented by the pyramids in stages one and two.

Each country will have different or unique population pyramids. However, population pyramids will be defined as the following: stationary, expansive, or constrictive. These types have been identified by the fertility and mortality rates of a country.[6]

"Stationary" pyramid
A pyramid can be described as stationary if the percentages of population (age and sex) remains constant over time.[7] Stationary population is when a population contains equal birth rates and death rates.[7]

"Expansive" pyramid
A population pyramid that is very wide at the younger ages, characteristic of countries with high birth rate and low life expectancy.[6] The population is said to be fast-growing, and the size of each birth cohort gets larger than the size of the previous year.[8]

"Constrictive" pyramid
A population pyramid that is narrowed at the bottom. The population is generally older on average, as the country has long life expectancy, a low death rate, but also a low birth rate.[6] However, the percentage of younger population are extremely low, this can cause issues with dependency ratio of the population.[8] This pyramid is more common when immigrants are factored out. This is a typical pattern for a very developed country, a high level of education, easy access to and incentive to use birth control, good health care, and few negative environmental factors.[9] 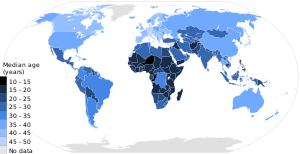 Median age by country. A youth bulge is evident for Africa, and to a lesser extent for West Asia, South Asia, Southeast Asia and Central America. 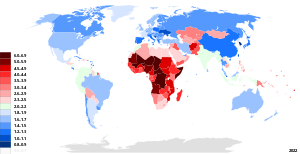 Map of countries by fertility rate (2020), according to the Population Reference Bureau

Gary Fuller (1995) described Youth bulge as a type of expansive pyramid. Gunnar Heinsohn (2003) argues that an excess in especially young adult male population predictably leads to social unrest, war and terrorism, as the "third and fourth sons" that find no prestigious positions in their existing societies rationalize their impetus to compete by religion or political ideology.

Heinsohn claims that most historical periods of social unrest lacking external triggers (such as rapid climatic changes or other catastrophic changes of the environment) and most genocides can be readily explained as a result of a built-up youth bulge.[10] This factor has been also used to account for the Arab Spring events.[11] Economic recessions, such as the Great Depression of the 1930s and the late 2000s recession, are also claimed to be explained in part due to a large youth population who cannot find jobs.[11] Youth bulge can be seen as one factor among many in explaining social unrest and uprisings in society.[12] A 2016 study finds that youth bulges increases the chances of non-ethnic civil wars, but not ethnic civil wars.[13]

A large population of adolescents entering the labor force and electorate strains at the seams of the economy and polity, which were designed for smaller populations. This creates unemployment and alienation unless new opportunities are created quickly enough – in which case a 'demographic dividend' accrues because productive workers outweigh young and elderly dependents. Yet the 16–29 age range is associated with risk-taking, especially among males. In general, youth bulges in developing countries are associated with higher unemployment and, as a result, a heightened risk of violence and political instability.[14][15] For Cincotta and Doces (2011), the transition to more mature age structures is almost a sine qua non for democratization.[16]

To reverse the effects of youth bulges, specific policies such as creating more jobs, improving family planning programs, and reducing over all infant mortality rates should be a priority.[17]

The Middle East and North Africa are currently experiencing a prominent youth bulge. "Across the Middle East, countries have experienced a pronounced increase in the size of their youth populations over recent decades, both in total numbers and as a percentage of the total population. Today, the nearly 111 million individuals aging between 15 to 29 living across the region make up nearly 27 percent of the region’s population." [18] Structural changes in service provision, especially health care, beginning in the 1960s created the conditions for a demographic explosion, which has resulted in a population consisting primarily of younger people. It is estimated that around 65% of the regional population is under the age of 25.[19]

The Middle East has invested more in education, including religious education, than most other regions such that education is available to most children.[20] However, that education has not led to higher levels of employment, and youth unemployment is currently at 25%, the highest of any single region.[21] Of this 25%, over half are first time entrants into the job market.[20]

The youth bulge in the Middle East and North Africa has been favorably compared to that of East Asia, which harnessed this human capital and saw huge economic growth in recent decades.[22] The youth bulge has been referred to by the Middle East Youth Initiative as a demographic gift, which, if engaged, could fuel regional economic growth and development.[23] "While the growth of the youth population imposes supply pressures on education systems and labor markets, it also means that a growing share of the overall population is made up of those considered to be of working age; and thus not dependent on the economic activity of others. In turn, this declining dependency ratio can have a positive impact on overall economic growth, creating a demographic dividend. The ability of a particular economy to harness this dividend, however, is dependent on its ability to ensure the deployment of this growing working-age population towards productive economic activity, and to create the jobs necessary for the growing labor force."[18]