The term mecha (Japanese: メカ, Hepburn: meka) may refer to both scientific ideas and science fiction genres that center on giant robots or machines (mechs) controlled by people. Mechas are typically depicted as humanoid mobile robots. The term was first used in Japanese (meka) after shortening the English loanword mekanikaru ('mechanical'), but the meaning in Japanese is more inclusive, and "robot" (robotto) or "giant robot" is the narrower term.

These machines vary greatly in size and shape, but are distinguished from vehicles by their humanoid or biomorphic appearance and size—bigger than a human. Different subgenres exist, with varying connotations of realism. The concept of Super Robot and Real Robot are two such examples found in Japanese anime and manga. The term may also refer to real world piloted humanoid or non-humanoid robotic platforms, either currently in existence or still on the drawing board (i.e. at the planning or design stage). Alternatively, in the original Japanese context of the word, "mecha" may refer to mobile machinery/vehicles (including aircraft) in general, manned or otherwise.

The word "mecha" (メカ, meka) is an abbreviation, first used in Japanese, of the word "mechanical". In Japanese, mecha encompasses all mechanical objects, including cars, guns, computers, and other devices, and the term "robot" (ロボット, robotto) or "giant robot" is used to distinguish limbed vehicles from other mechanical devices.[citation needed] Outside of this usage, it has become associated with large humanoid machines with limbs or other biological characteristics. Mechas differ from robots in that they are piloted from a cockpit, typically located in the chest or head of the mech.[1]

While the distinction is often hazy, mecha typically does not refer to form-fitting powered armor such as Iron Man's suit. They are usually much larger than the wearer, like Iron Man's enemy the Iron Monger, or the mobile suits depicted in the Gundam series.

In most cases, mecha are depicted as fighting machines, whose appeal comes from the combination of potent weaponry with a more stylish combat technique than a mere vehicle. Often, they are the primary means of combat, with conflicts sometimes being decided through gladiatorial matches. Other works represent mecha as one component of an integrated military force, supported by and fighting alongside tanks, fighter aircraft, and infantry, functioning as a mechanical cavalry. The applications often highlight the theoretical usefulness of such a device, combining a tank's resilience and firepower with infantry's ability to cross unstable terrain and a high degree of customization. In some continuities, special scenarios are constructed to make mecha more viable than current-day status. For example, in Gundam the fictional Minovsky particle inhibits the use of radar, making long-range ballistic strikes impractical, thus favouring relatively close range warfare of Mobile Suits.[citation needed]

However, some stories, such as the manga/anime series Patlabor and the American wargame BattleTech universe, also encompass mecha used for civilian purposes such as heavy construction work, police functions or firefighting. Mecha also see roles as transporters, recreation, advanced hazmat suits and other R and D applications.

Mecha have been used in fantasy settings, for example in the anime series Aura Battler Dunbine, The Vision of Escaflowne, Panzer World Galient and Maze. In those cases, the mecha designs are usually based on some alternative or "lost" science-fiction technology from ancient times. In case of anime series Zoids, the machines resemble dinosaurs and animals, and have been shown to evolve from native metallic organisms.[citation needed]

A chicken walker is a fictional type of bipedal robot or mecha, distinguished by its rear-facing knee joint. This type of articulation resembles a bird's legs, hence the name.[2] However, birds actually have forward-facing knees; they are digitigrade, and what most call the "knee" is actually the ankle.[3]

The 1868 Edward S. Ellis novel The Steam Man of the Prairies featured a steam-powered, back piloted, mechanical man. The 1880 Jules Verne novel La Maison à vapeur (The Steam House) featured a steam-powered, piloted, mechanical elephant. One of the first appearances of such machines in modern literature was the tripod or fighting machine of H. G. Wells' famous The War of the Worlds (1897). The novel does not contain a fully detailed description of the tripods' (or "fighting-machine", as they are known in the novel) mode of locomotion, however it is hinted at: "Can you imagine a milking stool tilted and bowled violently along the ground? That was the impression those instant flashes gave. But instead of a milking stool imagine it a great body of machinery on a tripod stand."

Ōgon Bat, a kamishibai that debuted in 1931 (later adapted into an anime in 1967), featured the first piloted humanoid giant robot, Dai Ningen Tanku (大人間タンク),[4] but as an enemy rather than a protagonist. The first humanoid giant robot piloted by the protagonist appeared in the manga Atomic Power Android (原子力人造人間, Genshiryoku Jinzō Ningen) in 1948.[5] The manga and anime Tetsujin 28-Go, introduced in 1956, featured a robot, Tetsujin, that was controlled externally by an operator via remote control. The manga and anime Astro Boy, introduced in 1952, with its humanoid robot protagonist, was a key influence on the development of the giant robot genre in Japan. The first anime featuring a giant mecha being piloted by the protagonist from within a cockpit was the Super Robot show Mazinger Z, written by Go Nagai and introduced in 1972.[6] Mazinger Z introduced the notion of mecha as pilotable war machines, rather than remote-controlled robots. Nagai later introduced the concept of gattai ("combination"), where several modules slot together to form a super robot, with Getter Robot (1974 debut).[7]

An early use of mech-like machines outside Japan is found in "The Invisible Empire", a "Federal Men" comic by Jerry Siegel and Joe Shuster (serialized 1936 in New Comics #8-10). Other examples include the Brazilian comic "Audaz, the demolisher", by Álvaro "Aruom" Moura and Manoel Messias (1939), Kimball Kinnison's battle suit in E. E. "Doc" Smith's Lensman novel Galactic Patrol (1950), the French animated film The King and the Mockingbird (first released 1952), and Robert Heinlein's waldo in his 1942 short story, "Waldo" and the Mobile Infantry battle suits in Robert Heinlein's Starship Troopers (1958).[citation needed]

RX-78-2 Gundam, introduced in Mobile Suit Gundam (1979), the first Gundam anime. It was the first real robot, in contrast to the super robots in earlier anime.

In Japan, "robot anime" (known as "mecha anime" outside Japan) is one of the oldest genres in anime.[10] Robot anime is often tied in with toy manufacturers. Large franchises such as Gundam, Macross, Transformers and Zoids have hundreds of different model kits.

The size of mecha can vary according to the story and concepts involved. Some of them may not be considerably taller than a tank (Armored Trooper Votoms, Megazone 23, Code Geass), some may be a few stories tall (Gundam, Escaflowne, Bismark, Gurren Lagann), others can be as tall as a skyscraper (Space Runaway Ideon, Genesis of Aquarion, Neon Genesis Evangelion), some are big enough to contain an entire city (Macross), some the size of a planet (Diebuster), galaxies (Getter Robo, Tengen Toppa Gurren Lagann), or even as large as universes (Tengen Toppa Gurren Lagann: Lagann-hen, Demonbane).

The first giant robots seen were in the 1948 manga Atomic Power Android (原子力人造人間, Genshiryoku Jinzō Ningen)[5] and Mitsuteru Yokoyama's 1956 manga Tetsujin 28-go. However, it wasn't until the advent of Go Nagai's Mazinger Z that the genre was established. Mazinger Z innovated by adding the inclusion of futuristic weapons, and the concept of being able to pilot from a cockpit[6] (rather than via remote control, in the case of Tetsujin). According to Go Nagai:

I wanted to create something different, and I thought it would be interesting to have a robot that you could drive, like a car.[6]

Mazinger Z featured giant robots which were "piloted by means of a small flying car and command center that docked inside the head."[6] It was also a pioneer in die-cast metal toys such as the Chogokin series in Japan and the Shogun Warriors in the U.S., that were (and still are) very popular with children and collectors.

Robot/mecha anime and manga differ vastly in storytelling and animation quality from title to title, and content ranges all the way from children's shows to ones intended for an older teen or adult audience.

Some of the first mecha featured in manga and anime were super robots. The super robot genre features superhero-like giant robots that are often one-of-a-kind and the product of an ancient civilization, aliens or a mad genius. These robots are usually piloted by Japanese teenagers via voice command or neural uplink, and are often powered by mystical or exotic energy sources.[11]

The later real robot genre features robots that do not have mythical superpowers, but rather use largely conventional, albeit futuristic weapons and power sources, and are often mass-produced on a large scale for use in wars.[11] The real robot genre also tends to feature more complex characters with moral conflicts and personal problems.[12] The genre is therefore aimed primarily at young adults instead of children.[13] Mobile Suit Gundam (1979) is largely considered the first series to introduce the real robot concept and, along with The Super Dimension Fortress Macross (1982), would form the basis of what people would later call real robot anime.[14]

Some robot mecha are capable of transformation (Macross and Zeta Gundam) or combining to form even bigger ones (Beast King GoLion and Tengen Toppa Gurren Lagann), the latter called gattai. Go Nagai is often credited with inventing this in 1974 with the television series Getter Robo.

Not all mecha need to be completely mechanical. Some have biological components with which to interface with their pilots, and some are partially biological themselves, such as in Neon Genesis Evangelion, Eureka Seven, and Zoids.

Mecha based on anime have seen extreme cultural reception across the world. The personification of this popularity can be seen as 1:1 size Mazinger Z, Tetsujin, and Gundam statues built across the world.

Imperial AT-AT walkers during the Battle of Hoth in The Empire Strikes Back, the second film of the original Star Wars trilogy. 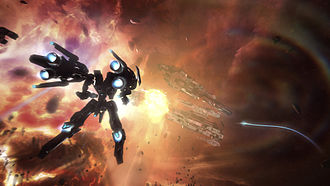 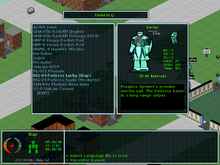 Mecha are often featured in computer and console video games. Because of their size and fictional power, mecha are quite popular subjects for games, both tabletop and electronic. They have been featured in video games since the 1980s, particularly in vehicular combat and shooter games, including Sesame Japan's side-scrolling shooter game Vastar in 1983,[15] various Gundam games such as Mobile Suit Gundam: Last Shooting in 1984 and Z-Gundam: Hot Scramble in 1986,[16] the run and gun shooters Hover Attack in 1984 and Thexder in 1985, and Arsys Software's 3D role-playing shooters WiBArm in 1986 and Star Cruiser in 1988. Historically mecha-based games have been more popular in Japan than in other countries.[17]

Mecha are part of the World of 1920+ as created by Jakub Różalski.

There are a few real prototypes of mecha-like vehicles. Currently almost all of these are highly specialized or just for concept purpose, and as such may not see mass production.

In the Western world, there are few examples of mecha, however, several machines have been constructed by both companies and private figures. Timberjack, a subsidiary of John Deere, built a practical hexapod walking harvester.[28]