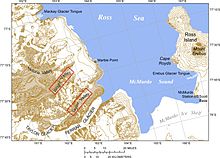 Map of the McMurdo Sound and the Dry Valleys

Location of valleys (indicated by red dot) within the Ross Dependency

The McMurdo Dry Valleys are a row of largely snow-free valleys in Antarctica, located within Victoria Land west of McMurdo Sound.[1] The Dry Valleys experience extremely low humidity and surrounding mountains prevent the flow of ice from nearby glaciers. The rocks here are granites and gneisses, and glacial tills dot this bedrock landscape, with loose gravel covering the ground.

The region is one of the world's most extreme deserts, and includes many features including Lake Vida, a saline lake, and the Onyx River, a meltwater stream and Antarctica's longest river. Although no living organisms have been found in the permafrost here, endolithic photosynthetic bacteria have been found living in the relatively moist interior of rocks and anaerobic bacteria, with a metabolism based on iron and sulfur, live under the Taylor Glacier.

The Dry Valleys are so named because of their extremely low humidity and lack of snow or ice cover. They are also dry because, in this location, the mountains are sufficiently high that they block seaward-flowing ice from the East Antarctic Ice Sheet from reaching the Ross Sea. At 4,800 square kilometres (1,900 sq mi), the valleys constitute around 0.03% of the continent and form the largest ice-free region in Antarctica. The valley floors are covered with loose gravel, in which ice wedge polygonal patterned ground may be observed.[2]

Precipitation averages around 100 millimetres (3.9 in) per year over a century of records, all in the form of snow.[3] The dry wind rapidly evaporates the snow and little melts into the soil. During the summer, this process can take only hours.

The unique conditions in the Dry Valleys are caused, in part, by katabatic winds; these occur when cold, dense air is pulled downhill by the force of gravity. The winds can reach speeds of 320 kilometres per hour (200 mph), heating as they descend and evaporating all water, ice and snow.[4] 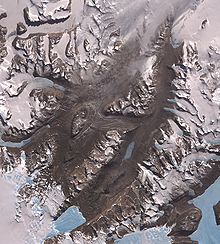 ASTER image of the Dry Valleys.

The McMurdo Oasis constitutes approximately 4,000 square kilometres (1,500 sq mi) of "deglaciated mountainous desert", according to McKelvey, bounded by the coastline of south Victoria Land and the Polar Plateau. The Taylor and Wright Valleys are major ice-free valleys within the Transantarctic Mountains. These "dry valleys" include hummocky moraines, with frozen lakes, saline ponds, sand dunes, and meltwater streams. Basement rocks include the Late Precambrian or Early Palaeozoic Skelton Group metamorphic rocks, primarily the Asgard Formation, which is a medium-high-grade marble and calc schist. The Palaeozoic Granite Harbour intrusives include granitoid plutons and dykes, which intruded into the metasedimentary Skelton Group in the Late Cambrian-Early Ordovician during the Ross orogeny. The basement complex is overlain by the Jurassic Beacon Supergroup, which is itself intruded by Ferrar Dolerite sheets and sills. The McMurdo Volcanic Group intrudes, or is interbedded with, the Taylor and Wright Valleys' moraines as basaltic cinder cones and lava flows. These basalts have ages between 2.1 and 4.4 Ma. The Dry Valley Drilling Project (1971–75) determined the Pleistocene layer within the Taylor Valley was between 137 and 275 m thick, and composed of interbedded sandstones, pebble conglomerates, and laminated silty mudstones. This Pleistocene layer disconformably overlies Pliocene and Miocene diamictites.[5][6] 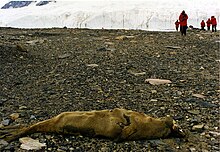 Endolithic bacteria have been found living in the Dry Valleys, sheltered from the dry air in the relatively moist interior of rocks. Summer meltwater from the glaciers provides the primary source of soil nutrients.[7] Scientists consider the Dry Valleys perhaps the closest of any terrestrial environment to the planet Mars, and thus an important source of insights into possible extraterrestrial life.

Anaerobic bacteria whose metabolism is based on iron and sulfur live in sub-freezing temperatures under the Taylor Glacier. It was previously thought that the algae was staining red the ice emerging at Blood Falls but it is now known that the staining is caused by high levels of iron oxide.[8][9]

Canadian and American researchers conducted a field expedition in 2013 to University Valley in order to examine the microbial population and to test a drill designed for sampling on Mars in the permafrost of the driest parts of the valleys, the areas most analogous to the Martian surface. They found no living organisms in the permafrost, the first location on the planet visited by humans with no active microbial life.[10]

Part of the Valleys was designated an environmentally protected area in 2004.

Field camp of scientists during the Antarctic summer, c. 1965

From north to south, the three main valleys are

West of Victoria Valley are, from north to south,

Stretching south from Balham Valley are, from west to east:

West of Taylor Valley is

Further south, between Royal Society Range in the west and the west coast of McMurdo Sound at the lobe of Koettlitz Glacier are, from north to south:

Some of the lakes of the Dry Valleys rank among the world's most saline lakes, with a higher salinity than Lake Assal (Djibouti) or the Dead Sea. The most saline of all is small Don Juan Pond.