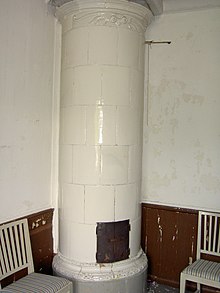 A classic Scandinavian style round ceramic stove which fits in the corner of a room.

A masonry heater (also called a masonry stove) is a device for warming an interior space through radiant heating, by capturing the heat from periodic burning of fuel (usually wood), and then radiating the heat at a fairly constant temperature for a long period. Masonry heaters covered in tile are called cocklestoves (also tile stoves or ceramic stoves). The technology has existed in different forms, from back into the Neoglacial and Neolithic periods. Archaeological digs have revealed excavations of ancient inhabitants utilizing hot smoke from fires in their subterranean dwellings, to radiate into the living spaces. These early forms have evolved into modern systems.

Evidence found from 5,000 B.C. of massive blocks of masonry used to retain heat foreshadowed early forms of fire hearths that were used as multifunctional heating sources. Later evolutions came in the Roman hypocaust and Austro-German cocklestove (Kachelofen, literally "tile stove", or Steinofen, "stone stove"), using the smoke and exhaust of a single fire. In Eastern and Northern Europe and North Asia, these cocklestoves evolved in many different forms and names: for example the Russian stove (Russian: Русская печь), the Finnish stove (in Finnish: pystyuuni or kaakeliuuni, "tile oven") and the Swedish stove (in Swedish: kakelugn, "tile stove" or "contra-flow stove") associated with Carl Johan Cronstedt. The Chinese developed the same principle into their Kang bed-stove. The masonry heater has gained renewed domestic popularity recently because of its heating efficiency.

A masonry heater is defined by ASTM International as "a vented heating system of predominantly masonry construction having a mass of at least 800 kg (1760 lbs), excluding the chimney and masonry heater base. In particular, a masonry heater is designed specifically to capture and store a substantial portion of the heat energy from a solid fuel fire in the mass of the masonry heater through internal heat exchange flue channels, enable a charge of solid fuel mixed with an adequate amount of air to burn rapidly and more completely at high temperatures in order to reduce emission of unburned hydrocarbons, and be constructed of sufficient mass and surface area such that under normal operating conditions, the external surface temperature of the masonry heater (except in the region immediately surrounding the fuel loading door(s)), does not exceed 110°C (230°F)."[1]

A cocklestove used for central heating, built around 1959.

The stove is made of masonry such as brick (firebrick), soapstone, tile, stone, stucco, or a combination of materials, rather than steel or cast iron. It usually requires special support to bear its weight. It consists of a firebox and heat-exchange channels or partitions that provide additional surface area. These absorb heat from the hot exhaust gases before the gases exit into the chimney. The fire in a masonry heater burns much hotter than in a metal stove. Very hot fires reduce emissions significantly. When not being fired, the connection from the masonry heater to the chimney sometimes has a damper to prevent heat from escaping up the chimney; the heat is then radiated from the masonry.

Masonry takes longer to heat than metal; but once warm, the heater will radiate this heat over a much longer period of time and at a much lower temperature than a metal stove would use (the metal is hot only when there is a fire burning inside the stove and for a short time thereafter). A masonry heater is warmed by fires that burn for a short time; it is mostly the heat stored by the heater's mass that heats the living space. Both in Europe and in America seating and even beds are occasionally built adjoining the masonry stove; this is possible because the heater's exterior surfaces are cool enough to touch safely. This cycle of short firings and long periods of heat-release makes a masonry heater a much more convenient option for actually heating a house with wood, than a metal wood stove. Masonry stoves can release heat from anywhere up to 36 hours after the fire has gone out (the larger the thermal mass the more heat the appliance can retain). This means that a householder might typically light a fire in the evening on returning home. In a more modern masonry heater with a glass door, this means that they can enjoy the fire during the evening. But overnight and throughout the next day when the fire is no longer alight the heater will still be warming the house, ready for the cycle to start again next evening. Compare this to a metal stove which is often either too hot or too cold (unlit) and the requirement for the owner to be present to load with logs at regular intervals and the benefits should be clear.

Heat stress is a major concern during the construction of masonry heaters. Differences in temperature inside the masonry core of the heater can result in differential expansion. A skilled heater mason knows how to provide for this stress when designing and constructing the heater, thereby preventing uneven expansion from causing cracking in the exterior. There are two general ways this concern is addressed. One is to incorporate a gap between the inner core of the heater and its outer "skin." The other is to build a more monolithic design with post-tension aspects to mechanically compensate for expansion and contraction. Both methods are used with success.[2]

The speed with which a masonry heater achieves the right temperature is determined by the specific thickness and characteristics of the materials used in its construction. Very responsive heaters warm up faster and are good for quicker adjustments to indoor temperature. Less responsive heaters take longer to warm, but they are well-suited for long periods of cold weather because they store heat so well and provide dependable, even heat all day and night.[3] Because the radiant heat is given off at a low level a masonry heater is not likely to overheat a home the way a metal stove might in warmer parts of the year like fall or spring. 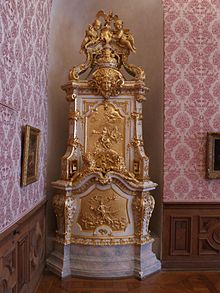 The tilestove (German: Kachelofen, "tile stove") design, a relatively large home heater surrounded with ceramic tile, has existed for at least five centuries. During the Renaissance period, the builders of cocklestoves were part of a distinct trade and were called hafnermeister. A cocklestove uses a maze-like passage created out of firebrick to release gases and smoke from the wood fire slowly, allowing the firebrick to retain as much heat as possible from the gases and smoke. The ceramic tile surrounding the cocklestove also acts as insulation to retain heat. Cocklestoves were carefully designed so that the minimum amount of heat would escape, only as much as needed to warm the flue to maintain a proper air draught. The firebrick used in cocklestove construction holds 80% more heat than ferrous metals such as cast iron, while its heat conductivity is 1/45 that of iron or steel.[4] A cocklestove is efficient enough to warm a house for up to 6 to 12 hours after the fire has stopped burning.[5]

Russian stove, another typical masonry heater, evolved in Russia in 15th century, after the brick flue was added to the traditional black-fired fireplace, which lacked the smokestack and vented directly into the room. The addition of the flue allowed for the better heat utilisation by passing the smoke and gases through the brick labyrinth called kolenya (коленья. "knees" or "bends") before allowing it into the smokestack. The large thermal mass of these bends captured the heat, slowly releasing it afterwards. The typical Russian stove is a large, generally cuboid mass of masonry, usually weighing around 1-2 tons, built in the center of a traditional izba log hut, covered in stucco and carefully whitewashed.[citation needed]

Most Russian stoves consist of a massive firebrick hearth, often large enough for a grown man to fit into, with a flue continuing into a maze-like heat exchanger built of a normal brick, usually with a built-in stove for cooking, which sometimes used a secondary fireplace to quickly cook foods without heating the whole affair; all covered with an outer brick shell, normally with a pedestal for a kitchen work and beds built into it. The stove was usually constructed by one of the house's walls, or, in the larger, multi-room houses, into one of the walls, in which case the room without the fireplace, and thus the smoke, but heated by the brick side of the stove, was called svetlitsa ("light one") and used as a living room, while the other was used as a kitchen. The small spaces left behind the stove and under its log foundation were called zapechye ("behind the stove") and podpechye ("under the stove"), and used as dry, warm storage. 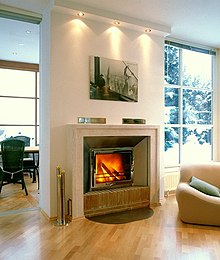 These heaters are primarily fired by wood, and those fires are meant to burn hot and quickly (never damped down, as is often the case with standard wood stoves). They are not burned continuously. This method of heating may have been response to the dwindling resource of wood before the advent of coal and other mineral energy sources. Open hearth fireplaces were an important source of light, as well as heat, and with an "unlimited" supply of wood to fire them, there is no incentive to increase the efficiency of their heat output, which is rather poor. However, once firewood became a scarcer resource, fireplace builders began to enclose the firebox to capture as much heat as possible.

Since masonry heaters burn hot and fast, they can accept any dry, split (usually three to five inches in diameter) wood. In some areas of central and eastern Europe, these heaters are sometimes effectively fired using grass, straw, and hay. It is also common in eastern Europe to modify these efficient heaters so that they are connected to the gas network and are fueled with gas. Some modern models incorporate electric heating elements connected to timers. These are used only as a backup heat source during periods when the structure will be left unattended for long duration in winter (and therefore with no one to build a new fire in the heater each day or as needed) to prevent the structure from freezing.

Some contemporary masonry heaters don't have a ceramic-tile exterior. Instead, the refractory bricks are covered by a heat-resistant kind of plaster. A glass door allows the burning fire to be seen. As in the past, once the firewood has burned, the warmed mass of the stove continues to radiate heat, but the sizes of the flue passages of modern masonry heaters are more exactly calculated to provide increased efficiency and output and use less wood.

Some modern masonry heaters are made out of soapstone, which has particularly high heat retention.