Mascara (Arabic: معسكر‎) is the capital city of Mascara Province, Algeria, in northwestern Algeria. It has 150,000 inhabitants (2008 estimate). It was founded in the 10th century by the Banu Ifran, a Berber tribe and was the capital city of Emir Abd al-Qadir, a leader of the Algerian resistance to early French colonial rule.

Mascara is an administrative, commercial and a market centre. Its trade is mostly centered on leather goods, grains, and olive oil, but it is especially famous for its good wine. It has good road and rail connections with other urban centres of Algeria. Relizane is 65 kilometres (40 miles) northeast, Sidi Bel Abbes 90 km (56 mi) southwest, Oran 105 kkm northwest and Saïda 80 km (50 mi) south.

Mascara has two parts, a newer French area, and an older Muslim one. Large parts of the town lie inside the ruins of its ancient ramparts. The city is home of Lakhdar Belloumi, the former Algerian football (soccer) star.

The word mascara is the francisation of the Arabic word معسكر‎ (mouaskar), meaning 'camp'. Due to French colonization at that time, the city's name has adopted the French version as an official name. The cosmetic mascara is unrelated etymologically, being derived from Italian: maschera, masked. 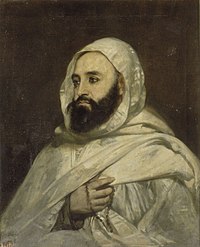 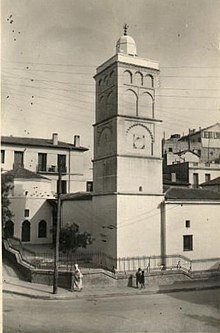 Mascara is twinned with: