Marriott International, Inc. is an American multinational diversified hospitality company that manages and franchises a broad portfolio of hotels and related lodging facilities. Founded by J. Willard Marriott, the company is now led by his son, executive chairman Bill Marriott, and president and chief executive officer Arne Sorenson. Marriott International is the largest hotel chain in the world by number of available rooms.[1] It has 30 brands with 7,484 properties in 131 countries and territories around the world,[1][2][3] over 1,400,693 rooms (as of June 30, 2020),[1] including 2,104 that are managed with 573,043 rooms, 5,314 that are franchised or licensed with 812,006 rooms, and 66 that are owned or leased with 15,644 rooms,[1] plus an additional 510,000 rooms in the development pipeline, including 230,000 that were under construction, and an additional 28,000 rooms approved for development but not yet under signed contracts.[1][4][5][6]

It is headquartered in Bethesda, Maryland, in the Washington, D.C. metropolitan area.[7]

The Key Bridge Marriott is the company's longest operating hotel.

Marriott was founded by John Willard Marriott in 1927 when he and his wife, Alice Sheets Marriott, opened a root beer stand in Washington, D.C.[8] As a Latter-day Saint missionary in the humid summers in Washington, D.C., Marriott was convinced that what residents of the city needed was a place to get a cool drink.[9] The Marriotts later expanded their enterprise into a chain of Hot Shoppes restaurants[10] and the company went public in 1953 as Hot Shoppes, Inc.[11]

The company opened its first hotel, the Twin Bridges Marriott Motor Hotel, in Arlington, Virginia, in 1957. Their second hotel, the Key Bridge Marriott in the Rosslyn neighborhood of the same city, is Marriott International's longest continuously operating hotel and celebrated its 50th anniversary in 2009.[12] Their son, J. W. (Bill) Marriott, Jr., led the company to spectacular worldwide growth during his more than 50-year career. In March 2012, at age 80, he turned the CEO responsibilities over to Arne Sorenson, while he assumed the title of executive chairman.

Hot Shoppes, Inc. was renamed the Marriott Corporation in 1967.[13]

The Ritz-Carlton began expansion into the lucrative timeshare market and undertook other new initiatives made financially possible by the deep pockets of Marriott, which also lent its own in-house expertise in certain areas. There were other benefits for Ritz-Carlton flowing from its relationship with Marriott, such as being able to take advantage of the parent company's reservation system and buying power. The partnership was solidified in 1998 when Marriott acquired majority ownership of The Ritz-Carlton. Today, there are 91 Ritz-Carlton properties around the world.[16]

The Marriott World Trade Center was destroyed during the September 11, 2001, attacks.

In 2002 Marriott International began a major restructuring by spinning off many Senior Living Services Communities (which is now part of Sunrise Senior Living) and Marriott Distribution Services, so that it could focus on hotel ownership and management. The changes were completed in 2003.[20]

In 2005, Marriott International and Marriott Vacation Club International comprised two of the 53 entities that contributed the maximum of $250,000 to the second inauguration of President George W. Bush.[21][22][23]

On July 19, 2006, Marriott announced that all lodging buildings it operated in the United States and Canada would become non-smoking beginning in September 2006. "The new policy includes all guest rooms, restaurants, lounges, meeting rooms, public space and employee work areas."[24] 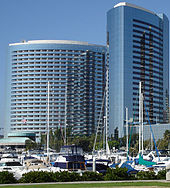 San Diego Marriott Marquis & Marina, one of the highest revenue-generating Marriotts in the United States

On November 11, 2010, Marriott announced plans to add over 600 hotel properties by 2015. The bulk of the additions would be in emerging markets: India, where it planned to have 100 hotel properties, China, and Southeast Asia.[25]

On January 21, 2011, Marriott said that pornography would not be included in the entertainment offered at new hotels, which would use an Internet-based video on demand system.[26]

On December 13, 2011, J.W. Marriott, Jr. announced he would be stepping down as CEO of the company while assuming the role of executive chairman. It was announced that Arne Sorenson would be taking over as CEO as of March 2012.[27]

U.S. Republican presidential candidate Mitt Romney released his 2011 federal income taxes on September 21, 2012, showing that he declared $260,390 in director's fees from Marriott International,[28] despite the fact that news was released on January 13, 2011, that he had already stepped down from the Marriott International board to run for president.[29] His released 2010 tax returns showed earnings in 2010 of $113,881 in director's fees from Marriott.[30] In February 2012, Bloomberg reported on Romney's years overseeing tax matters for Marriott, which had included several "scams" (quoting Sen. John McCain) and legal actions brought against Marriott, which Marriott lost in court, over its manipulations of the U.S. Tax Code.[31][32] 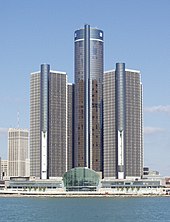 The Detroit Marriott at the Renaissance Center is one of the tallest hotels in the Western Hemisphere.[34]

On October 3, 2014, the US Federal Communications Commission (FCC) fined Marriott $600,000 for unlawful use of a "containment" feature of a Wi-Fi monitoring system to deliberately interfere with client-owned networks in the convention space of its Gaylord Opryland Resort & Convention Center in Nashville. The scheme disrupted operation of clients' mobile telephone hotspots by sending fraudulent Wi-fi de-authentication packets.[35] Marriott International, Inc., the American Hotel and Lodging Association and Ryman Hospitality Properties responded by unsuccessfully petitioning the FCC to change the rules to allow them to continue the willful jamming of client-owned networks,[36] a position which they were forced to abandon in early 2015 in response to backlash from clients, mainstream media, major technology companies, and national mobile carriers.[37]

The incident drew unfavorable publicity to Marriott's practice of charging transient lodgers $13–15/day for wi-fi connections, routinely included in the base price at most discount chains,[38] and to exorbitant wi-fi fees (typically $250–1000 per device[37]) charged to convention-goers at a time when the $2.25 billion "incidental fees" annually charged by US-based hotels to their lodgers was already drawing criticism and negative media coverage.[39]

On January 27, 2015, Marriott acquired Canadian hotel chain Delta Hotels.[40] Delta operated 38 hotels in Canada at the time of acquisition; it has since expanded to the United States, Europe, and Asia.

On November 16, 2015, Marriott announced the acquisition of Starwood Hotels and Resorts Worldwide for $13 billion.[41] A competing offer for Starwood at $14 billion from a consortium led by China's Anbang Insurance Group was announced March 3, 2016, moving Starwood to cease the deal with Marriott and pursue the offer from Anbang Insurance Group.[42][43] After Marriott raised its bid to $13.6 billion on March 21, Starwood terminated the Anbang agreement and proceeded again with the merger with Marriott.[44] Following all necessary regulatory approvals in the United States and around the world over the course of 2016, Marriott closed the merger with Starwood on September 23, 2016, creating the world's largest hotel company with over 5700 properties, 1.1 million rooms, and a new portfolio of 30 brands.[45]

The Starwood acquisition gave Marriott a larger non-US presence; approximately 75% of Starwood's revenues were from non-US markets. The acquisition was the largest of its sort since 2007, when Blackstone acquired Hilton for $26 billion. Executives noted that total transaction and integration expenditures may exceed $100 million.[46][47]

On November 30, 2018, Marriott disclosed that its Starwood Hotel brand had been subject to a security breach. After the disclosure, New York Attorney General Barbara Underwood announced an investigation into the data breach.[48]

The 2018 cyberattack on the Marriott hotel chain[49][50] that collected personal details of roughly 500 million guests is now known to be a part of a Chinese intelligence-gathering effort that also hacked health insurers and the security clearance files of millions more Americans. The hackers are suspected of working on behalf of the Ministry of State Security, the country's Communist-controlled civilian spy agency.[51][52][53] Initially, Marriott admitted that 500 million customer's personal information had been exposed.[54] It later amended their admission to "less than 383 million" customers, and claimed many of the customer's payment cards had expired.[citation needed]

Marriott is the first hotel chain to serve food that is completely free of trans fats at all of its North American properties.[55][56]

The hotel is noted for providing copies of the Book of Mormon in addition to the Bible in its rooms.[57]

The spread of the COVID-19 pandemic had a negative effect on business travel and hotel conferences. In Q2 of 2020, Marriott International reported a revenue loss of $234 million (72 cent per share). As a comparison, the company reported a profit of $232 million for the same period, the previous year.[60][61] 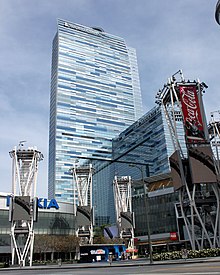 J.W. Marriott and the Ritz-Carlton at LA Live, Los Angeles 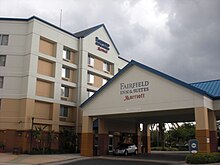 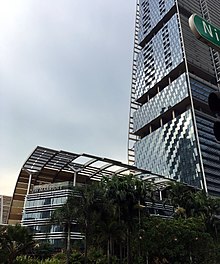 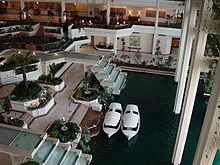 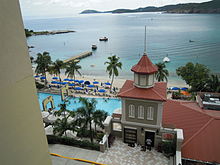 Marriott developed three theme parks, of which two theme parks were opened. They operated as Marriott's Great America from 1976 until 1984. The parks were located in Gurnee, Illinois; Santa Clara, California; and a proposed but never-built location in the Washington, D.C., area, and were themed celebrating American history. The American-themed areas under Marriott's tenure of ownership included "Carousel Plaza" (the first section beyond the main gates); small-town-themed "Hometown Square"; "The Great Midwest Livestock Exposition At County Fair" with a Turn of the Century rural-fair theme; "Yankee Harbor", inspired by a 19th-century New England port; "Yukon Territory," resembling a Canadian/Alaskan logging camp; and the French Quarter-modeled "Orleans Place". At the opening, the parks had nearly identical layouts.

In 1984, Marriott disposed of its theme park division; both parks were sold and today are associated with national theme park chains. The Gurnee location was sold to Six Flags Theme Parks where it operates today as Six Flags Great America. The Santa Clara location was sold to the City of Santa Clara, who retained the underlying property and sold the park to Kings Entertainment Company, renamed Paramount Parks in 1993. From 1993 to 2006, the Santa Clara location was known as Paramount's Great America. In 2006, Paramount Parks was acquired by Cedar Fair Entertainment Company; the Santa Clara park operates today as California's Great America. In the years after their sale, the layouts of both of the parks have diverged substantially.

Marriott Bonvoy is the loyalty program used by Marriott and was formed in the 2019 merger of its three former rewards programs: Marriott Rewards, Ritz-Carlton Rewards, and Starwood Preferred Guest.