Marriage à la façon du pays ([a la fa.sɔ̃ dy pɛ.i]; "according to the custom of the country") was to the practice of common-law marriage between European fur traders and aboriginal or Métis women in the North American fur trade.[1]:4 Canadian historian Sylvia Van Kirk calls them "the basis for a fur trade society".[2] It persisted from the early seventeenth century until it fell out of fashion in the late nineteenth century due to increasing pressures of Catholic ideology, growing European populations, and a new generation of more desirable “mixed-breed” daughters who eventually replaced their Native mothers as fur trade wives.[3] Rituals surrounding them were based on a mix of European and Indigenous customs, though predominantly the latter.

The presence of women in the "factories" (i.e. trading posts) of what is now Canada had been banned by the Hudson's Bay Company as early as 1683. Intermarriage was common from the start of the fur trade, and by 1739 the Company overturned its ban. The practice was both a social and a political institution, securing trade relations between Europeans and aboriginals, just as intermarriage between tribes was a political instrument of the aboriginals themselves.[4]

These marriages came with the expectation that trade between the woman's relations and the trader would be secured, and that mutual aid would be provided in times of need. It was also the hope of the woman's family that the trader's generosity would increase after the marriage took place. The marriages between these two groups led to the creation of the Métis people, who are considered the offspring of the fur trade.[5]:73

The North American fur trade began in the seventeenth century when European and Aboriginal people began meeting at the Saint Lawrence River to trade goods.[6]:24 The Europeans were mainly interested in buying furs for the luxury fur and felt market in Europe. Beaver pelts for use in millinery were particularly sought after. Aboriginal people knew the best places and methods for trapping, and therefore became valuable procurers for the Europeans. Because European traders had no knowledge of the Canadian landscape and climate, they also needed Aboriginal assistance in surviving. In contrast, Aboriginal people were interested in European goods that they previously had no access to, such as metal pots and utensils.[6]:46 As trade continued, the Ojibwa people would act as middlemen for the traders, bringing goods into the western interior to trade with the Cree and Assiniboine, and bringing furs back to the Europeans.[6]:24 As the trade progressed into the eighteenth century, the Cree and Assiniboine people would start becoming middlemen themselves, increasing their participation in the trade.[6]:25 As more Aboriginal people became involved in the trade it became apparent that personal relationships were becoming important aspects of the trade. Fostering relationships was a valuable way to secure trade access and loyalty between particular native groups and European traders. Some historians even believe that this is what caused the great success of the fur trade. For example, Brenda Macdougall writes that Aboriginal people refused to trade only for economic reasons, illuminating how personal relationships were pivotal for the success of the fur trade.[7]:10 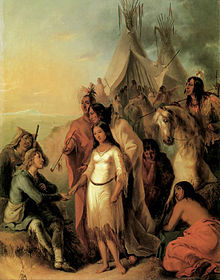 Aboriginal women in the fur trade

Aboriginal women were also starting to foster important bonds with the traders during the same time that the men were. Women's labour produced a variety of different goods that would become very important for the traders. These goods included wild rice, maple sugar, and woven mats.[8]:119 The women's production of food would become increasingly important to the traders when trade locations shifted to native villages. For instance, traders would have to depend on the food supply obtained from Aboriginal women for survival.[8]:120 For example, traders living in Ojibwa villages would consume a large amount of rice during their stays.[8]:125 Additionally, women were able to take part in the trade of goods that aboriginal men and women made together. Ojibwa women contributed by making canoes that were used to take part in the trades.[8]:125 The trade of canoes allowed the aboriginal women to obtain a wide range of goods for themselves.[8]:125 Since many aboriginal women were also in charge of processing the furs that the men brought back this gave the women a great deal of authority in the trading of the final product.[8] Because of this division of labour, the fur trade consisted of multiple interwoven relationships between Aboriginal men, Aboriginal women, and male European traders. Moreover, these relationships illuminate that from the beginning of the fur trade aboriginal women had some forms of agency and control.

The different relationships between the Aboriginal people and the traders highlight how the trade became interdependent. Both Europeans and Aboriginal people would become reliant on each other in order to sustain the fur trade and their way of life.[6]:30 Many scholars have contemplated whether or not these relationships of interdependency were a positive for everyone involved. For example, Mary C. Wright believes that while Aboriginal women were an important contributor to the success of the fur trade, their informal relationships with European men ultimately remained unrecognized and therefore left them with no more power than they had before the trade had begun.[9]:526 In contrast, Sylvia Van Kirk believes that even though the benefits that Aboriginal women gained were questionable, they were ultimately able to secure certain advantages for themselves through marriage.[10]:43 Despite historians questioning their power relationships within the fur trade, it is ultimately apparent that Aboriginal women were active participants in fur trade society.

The purpose of a marriage à la façon du pays was, from the European perspective, to provide the European husband with an advantage over his competitor in the fur trade business. While the native women fulfilled traditional marital roles as sexual partners and possessed valuable skills such as cooking, sewing, and moccasin and snowshoe making, their most attractive feature was the promise of economic prosperity. This was achieved when a native wife acted as a cultural intermediary between her people and the European fur traders. These marriages were not used to assimilate indigenous women into European culture, but instead worked to create a cultural middle ground where the exchange of goods could take place peacefully.[11] Aboriginal women often acted as interpreters for traders and trappers, as well as negotiating deals. Through this inclusion in his wife's native community, the European husband was guaranteed steady, easy access to furs.

The marriages were conducted using the traditions of the group that the woman came from. Marriages were much less formal than those in Europe, and were often consecrated by the bride's family based on the exchange of a bride-price.[12] Unlike European marriages performed by clergy members, these unions were not seen as permanent. It was understood that both parties could leave the marriage if they were dissatisfied or no longer interested in the union. Some of the men involved had wives in their home country, and would later leave their North American wives. In native communities, the exchange of women was a common practice among allies, and native leaders expected that their offers of native women would be reciprocated by the European traders in the form of access to trading posts and provisions.[10]:32 Bruce M. White has also identified the importance that native people placed on the giving of gifts and respect, and the reciprocation of said gifts and respect, in order to keep the fur trade running smoothly.[8]:111

For a native woman, engaging in a marriage à la façon du pays could be just as beneficial to her as it was to her husband. According to Susan Sleeper-Smith, the establishment of these relationships was a process of cultural and economic adaptation bred out of necessity. Furthermore, Sleeper-Smith makes the claim that being married to a European fur trader increased the authority of his Indigenous wife, as well as the importance of the entire community. Native women were able to build networks through kinship and religion (specifically Catholicism), making trade easier and "allowing these women to negotiate for themselves positions of prominence and power".[11]:423–424 In fact, some women gained enough power that they faced opposition from other traders, who objected to their control over trading practices. Some, such as Magdalaine Marcot la Framboise and her sister Thérèse Marcot Lasalier Schindler, became so powerful that they were able to set themselves up as independent fur traders.[11]:426

Marriages between fur traders and Indigenous women declined after the turn of the nineteenth century, when intermarriage became less politically and economically advantageous on both sides. Marriage-based alliances became less important to trade relations as trading became more established. An influx of European and Métis women in Canada and the West gave European traders more options for marriage and companionship. Both Métis and European wives were seen as more appropriate partners, due to growing anti-aboriginal prejudice and other social and cultural reasons. Bringing more native women into the forts and factories was also putting greater financial burden on the trading companies.[8]:133 The increase in European traders and settlers in the West also made marriage customs more closely resemble those from Europe.[1]:11 Growing missionary presence condemned marriage by "Indian rules".

Prolonged exposure to European men and settlers in general brewed animosity amongst Indigenous women and their communities, which discouraged women from forming partnerships. Van Kirk has argued as well that over time, conditions for native women living with European men deteriorated.[10]:37 The women were often more exposed to disease, and the burden of having more children at smaller intervals placed strains on their health. Cultural differences, especially in terms of who had control over raising the child, also caused animosity and discouraged intermarriage. Some indigenous groups would prevent certain traders from marrying their women, or entirely banned relationships with European traders.[10]:42 The North West Company eventually banned the practice of intermarriage for employees in 1806, though marriage to Métis women was allowed.[6]:69 Though they continued to happen throughout the nineteenth century, marriages à la façon du pays would decrease significantly over the following decades.

The Métis communities that developed in areas such as Red River and the Great Lakes are based upon the connections from relationships between Aboriginal women and French men as they created fur trading posts and factories throughout the West.[11]:432 The Métis communities were distinctive because of the intensity of the connections to both the French Catholic social and economic networks and the native lives that the women were already used to living.[11]:432 The Aboriginal women who became mothers to the Métis community were mainly from the Cree and Ojibwa tribes.[5]:73 The Métis communities became one of the most influential ties between the Aboriginal peoples and the Europeans. Macdougall noted that the Métis people were influential to the running of the fur trade and even one of the major determining factors in the way in which the fur trade came to be run.[7]:13

Marriage for Métis people, especially young Métis men, became quite difficult because of their strong connections to both Native traditions and French customs, leading to a number of marriages being potentially seen as illegitimate.[13]:48–49 The Métis families began marrying between Métis kin, particularly those situated around the Great Lakes who were parts of the much larger fur trade communities.[11]:441 This intermarriage led to an extremely distinctive culture of Métis people in the Great Lakes and the Canadian West.[11]:441 In contrast to many minority groups, the Métis people made a conscious effort to be non-conformist.[5]:72 This and their distinctive identity led to a number of conflicts between the Métis, European settlers and the Canadian government throughout the nineteenth century, such as the Red River Rebellion. The government of Alberta has made the official distinction for Métis people by saying that the Métis are those who fail to meet the social and legal distinctions of Native or European but are the offspring of both.[5]:72