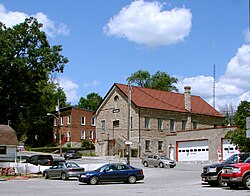 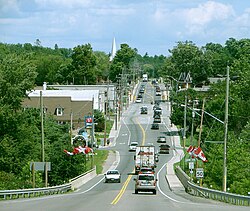 Marmora is the largest community in the Municipality of Marmora and Lake in Hastings County, Ontario, Canada. It is located on the Crowe River and along Highway 7 between Havelock to the west and Madoc to the east, about the half way point between Ottawa and Toronto.

The village was named after Marmora Township, which is itself named for the Latin word for marble. Marble is common in the area and a giant marble rock stood on nearby Crowe Lake.

The rich history of Marmora Township is the story of mining in Eastern Ontario. Since 1820 this Township has played a leading role in the development of iron mining. In addition, copper, lead, silver, gold and lithographic limestone have been extracted.

Iron mining was an important industry in the area during the 19th century. The village was originally named Marmora Iron Works. Gold and silver were also mined at nearby Cordova Mines. A nearby plant processes talc and dolomite.

Marmora was separated from Marmora and Lake Township and incorporated as a village in 1901.

On April 14, 1821, the government passed an act setting up Marmora Township and attaching it to Hastings County as per Charles Hayes's request to do so in 1820. The new Township took its name from the Latin word for 'marble' because of an ‘immense rock of most delicate white marble’. This giant rock stood on the southeast corner of Crowe Lake. The Lake took its name from the Crowe Indians that lived along the shore.

Marmora Township was opened for sale in 1821, but there was little settlement outside of the newly created mining village. Although mining and lumbering have been vital to the Township, agriculture has probably supported more people in the area since 1850. A remaining legacy of iron mining is the Marmora Open Pit Mine, a man-made wonder-lake, seventy five acres in area, five hundred and fifty feet deep, filled with four hundred feet deep of clear blue spring water that is steadily rising to the top.

Attractions include the Marmora Mine, an abandoned open-pit iron ore mine containing a wealth of minerals, including garnet and pyrite. This location is also a host to a variety of wildlife. The mine itself is filled with several hundred feet of water. The water originates from an underground spring which was exposed during mining operations.

Camping and other outdoor recreational activities such as ATV trail riding, fishing, and hunting are very popular for locals and those on vacation. The Crowe River flows from Crowe Lake, which boasts excellent fishing for bass, muskie, pike, walleye, and a few other types of fish.

Since 1979 Marmora SnoFest has held the annual Marmora Cup (dogsled racing|dog-sled races). A Committee of Council was established in 2005 to provide a more defined structure for the running and organizing of the historical event. A Board of Directors was then formed in 2007. With its hosting and running of sled dog races it makes the Marmora SnoFest, host of the Marmora Cup, the longest running event of its type in Canada.

Annual Marmora Area Canoe and Kayak Festival - Marmora and Lake is the host location as chosen by the Kawartha WhiteWater Paddlers. After a thorough river review throughout the province Marmora and Lake was chosen for its many rivers.

Formerly annual festivities of Punk Fest led by Warren Hastings, a.k.a. Spider, were held here for several years before the township put them to an end, because they would not allow medics on site or supply washrooms/fresh water to the party-goers. "Punks" and bands from all over the world traveled to Marmora for the weekend's events.

Home of The Classic Cruisers (Car Show), running every Thursday at 6 pm throughout the summer.

Home of Beautiful Glen Allan Park, a cottage and trailer resort since the early 1900s on the north shore of Crowe Lake.

Home to the scenic Crowe Valley Campground, located in town alongside the Crowe River.