Mario José Molina-Pasquel Henríquez (born March 19, 1943) is a Mexican chemist. He played a pivotal role in the discovery of the Antarctic ozone hole, and was a co-recipient of the 1995 Nobel Prize in Chemistry for his role in elucidating the threat to the Earth's ozone layer of chlorofluorocarbon (CFC) gases. He became the first Mexican-born citizen to receive a Nobel Prize in Chemistry.[7]

In 2004 Molina accepted the positions of professor at the University of California, San Diego and the Center for Atmospheric Sciences at the Scripps Institution of Oceanography. Molina is also Director of the Mario Molina Center for Energy and Environment in Mexico City. Molina was a climate policy adviser to the President of Mexico, Enrique Peña Nieto.[8] 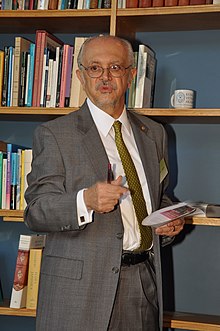 Molina at the 2011 Nobel Laurate Globalsymposium

Molina is the son of Roberto Molina-Pasquel, a lawyer and judge who went on to serve as chief Ambassador to Ethiopia, Australia and the Philippines in 1923,[9] and Leonor Henríquez. As a child he converted a bathroom into his own little laboratory, using toy microscopes and chemistry sets. He looked up to his aunt Esther Molina, who was a chemist, and who helped him with his experiments.[10]

After completing his basic studies in Mexico City and at the Institut auf dem Rosenberg in Switzerland[9][11] he earned a bachelor's degree in chemical engineering at the National Autonomous University of Mexico (UNAM) in 1965. In 1967 he earned his postgraduate degree in polymerization kinetics at the Albert Ludwigs University of Freiburg, West Germany, and in 1972 a Ph.D. in physical chemistry from the University of California, Berkeley, working with George C. Pimentel.[5][6] Molina met fellow chemist Luisa Y. Tan there and they married in July 1973. They moved to Irvine, California that fall.[12]

In 1974, as a postdoctoral researcher at University of California, Irvine, he and F. Sherwood Rowland co-authored a paper in the journal Nature highlighting the threat of CFCs to the ozone layer in the stratosphere.[13] At the time, CFCs were widely used as chemical propellants and refrigerants. Molina and Rowland followed up the short Nature paper with a 150-page report for the AEC, which they made available at the September 1974 meeting of the American Chemical Society in Atlantic City. This report and an ACS-organized press conference, in which they called for a complete ban on further releases of CFCs into the atmosphere, brought national attention.[14]

Rowland and Molina's findings were disputed by commercial manufacturers and chemical industry groups, and a public consensus on the need for action only began to emerge in 1976 with the publication of a review of the science by the National Academy of Sciences. Rowland and Molina's work was further supported by evidence of the long-term decrease in stratospheric ozone over Antarctica, published by Joseph C. Farman and his co-authors in Nature in 1985. Ongoing work led to the adoption of the Montreal Protocol (an agreement to cut CFC production and use) by 56 countries in 1987, and to further steps towards the worldwide elimination of CFCs from aerosol cans and refrigerators. It is for this work that Molina later shared the Nobel Prize in Chemistry.[15] Molina was one of twenty-two Nobel Laureates who signed the third Humanist Manifesto in 2003.[16]

Between 1974 and 2004, Molina variously held research and teaching posts at University of California, Irvine, the Jet Propulsion Laboratory at Caltech, and the Massachusetts Institute of Technology (MIT), where he held a joint appointment in the Department of Earth Atmospheric and Planetary Sciences and the Department of Chemistry.[5] On July 1, 2004 Molina joined the Department of Chemistry and Biochemistry at University of California, San Diego and the Center for Atmospheric Sciences at the Scripps Institution of Oceanography.[17] In addition he established a non-profit organization, which opened the Mario Molina Center for Strategic Studies in Energy and the Environment (Spanish: Centro Mario Molina para Estudios Estratégicos sobre Energía y Medio Ambiente) in Mexico City in 2005. Molina serves as its director.[18]

Molina served on the board of trustees for Science Service, now known as Society for Science & the Public, from 2000-2005.[19] He also served on the board of directors of the John D. and Catherine T. MacArthur Foundation (2004-2014),[20] and as a member of the MacArthur Foundation's Institutional Policy Committee and its Committee on Global Security and Sustainability.[21]

Molina was nominated to the Pontifical Academy of Sciences as of July 24, 2000.[22] He served as a co-chair of the Vatican workshop and report Well Under 2 Degrees Celsius: Fast Action Policies to Protect People and the Planet from Extreme Climate Change (2017) with Veerabhadran Ramanathan and Durwood Zaelke. The report proposed 12 scalable and practical solutions which are part of a three-lever cooling strategy to mitigate climate change.[23][24]

Molina was named by U.S. President Barack Obama to form a transition team on environmental issues in 2008.[25] Under President Obama, he was a member of the United States President's Council of Advisors on Science and Technology.[26]

Molina and his first wife Luisa are divorced. Luisa Tan Molina is now the lead scientist of the Molina Center for Strategic Studies in Energy and the Environment in La Jolla, California.[27] Their son, Felipe Jose Molina, was born in 1977.[9][28] He graduated from Brown University and Harvard Medical School and now works as an internist in Boston. He is affiliated with Beth Israel Deaconess Medical Center and is an Instructor in Medicine at Beth Israel Deaconess Medical Center and Harvard Medical School.[29] Molina married his second wife, Guadalupe Álvarez, in February 2006.[9]

Molina currently sits on the board of directors for Xyleco.[30]

Discovery of harmful effects of CFCs

Molina joined the lab of Professor F. Sherwood Rowland in 1973 as a postdoctoral fellow. Here, Molina continued Rowland's pioneering research into "hot atom" chemistry, which is the study of chemical properties of atoms with excess translational energy owing to radioactive processes.[10][31]

This study soon led to research into chlorofluorocarbons (CFCs), apparently harmless gases that were used in refrigerants, aerosol sprays, and the making of plastic foams.[32] CFCs were being released by human activity and were known to be accumulating in the atmosphere. The basic scientific question Molina asked was "What is the consequence of society releasing something to the environment that wasn’t there before?"[31]

Rowland and Molina had investigated compounds similar to CFCs before. Together they developed the CFC ozone depletion theory, by combining basic scientific knowledge about the chemistry of ozone, CFCs and atmospheric conditions with computer modelling. First Molina tried to figure out how CFCs could be decomposed. At lower levels of the atmosphere, they were inert. Molina realized that if CFCs released into the atmosphere do not decay by other processes, they will continually rise to higher altitudes. Higher in the atmosphere, different conditions apply. The highest levels of the stratosphere are exposed to the sun’s ultraviolet light. A thin layer of ozone floating high in the stratosphere protects lower levels of the atmosphere from that type of radiation.[32]

Molina theorized that photons from ultraviolet light, known to break down oxygen molecules, could also break down CFCs, releasing a number of products including chlorine atoms into the stratosphere. Chlorine atoms (Cl) are radicals: they have an unpaired electron and are very reactive. Chlorine atoms react easily with ozone molecules (O3), removing one oxygen atom to leave O2 and chlorine monoxide (ClO).[32][33]

ClO is also a radical, which reacts with ozone to release two O2 molecules and a Cl atom. The radical Cl atom is not consumed in these reactions, so it remains in the system.[32][33]

Molina and Rowland predicted that chlorine atoms, produced by this decomposition of CFCs, would act as an ongoing catalyst for the destruction of ozone. When they calculated the amounts involved they realized that CFCs could start a seriously damaging chain reaction to the ozone layer in the stratosphere.[15][10][31]

Rowland and Molina published their findings in Nature on June 28, 1974, and also made an effort to announce their findings outside of the scientific community, informing policy makers and the news media of their work. As a result of their work, laws were established to protect the ozone layer by regulating the use of CFCs.[10][31] 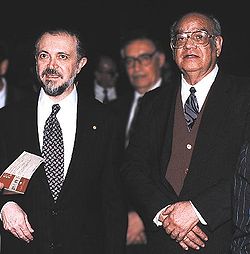 Molina has received numerous awards and honors,[5][6] including sharing the 1995 Nobel Prize in chemistry with Paul J. Crutzen and F. Sherwood Rowland for their discovery of the role of CFCs in ozone depletion.[1]

Molina was elected to the National Academy of Sciences in 1993.[34] He was elected to the United States Institute of Medicine in 1996,[35] and The National College of Mexico in 2003.[36] He is also a member of the Mexican Academy of Sciences.[5] Molina is a fellow of the American Association for the Advancement of Science and co-chaired the 2014 AAAS Climate Science Panel, What We Know: The reality, risks and response to climate change.[37]

On August 8, 2013, President Barack Obama announced Molina as a recipient of the Presidential Medal of Freedom,[44] saying in the press release:

Mario Molina is a visionary chemist and environmental scientist. Born in Mexico, Dr. Molina came to America to pursue his graduate degree. He later earned the Nobel Prize in Chemistry for discovering how chlorofluorocarbons deplete the ozone layer. Dr. Molina is a professor at the University of California, San Diego; Director of the Mario Molina Center for Energy and Environment; and a member of the President’s Council of Advisors on Science and Technology.[4]